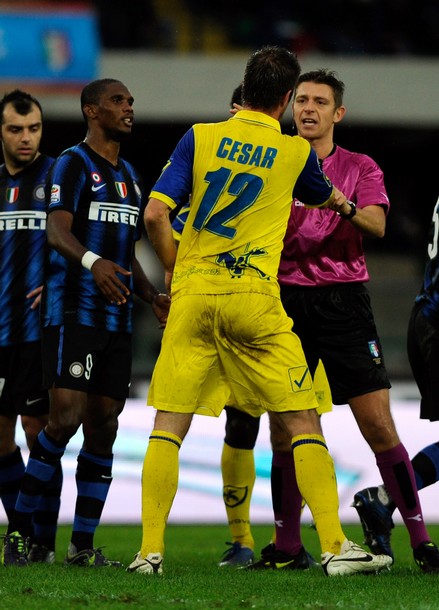 Inter try to shake the set backs of last week and start a better now and tomorrow with the noon game today against Chievo.

Inter has done well against Chievo historically at home with a 5-2-1 record. The most recent game was last May 9th with the score ending 4-3. Inter went ahead 4-1, the last score from Mario Balotelli at 54’. Chievo came back a bit in the second and reduced the deficit to 1 goal with 14 minutes remaining in regular time.

Who: Inter - Chievo
Where: Stadio Giuseppe Meazza, Milano
When: 12:00pm EST.
Where to watch: I don’t know if FSC is showing this game as they are usually all about the EPL on Saturdays. On the web Atdhe.me and myp2p.eu are the ones I use most often. Or just pay attention during the LiveBlog, someone with a good stream will mention it.

Inter are 3rd in the table with 60 pints, 5 off the leaders Milan. Inter are 3-1-1 in their last 5 games for 10 points out of a possible 15. The loss came to Milan in the last League game Inter played.

After the honeymoon of dragging Inter up from the doldrums of 7th place and 13 points back, Leo has come under fire for the last two games. He responded at his presser thusly:

“If I had been a director, I probably would have been less kind than the President,” Leonardo said.
“At times thinking like a director I would sack myself: but I don't feel at risk because it's not part of who I am. I am not afraid of losing my place. If it happens, it happens. But I am sure that we can take the situation in hand again.
“The resources to do it aren't lacking. For example, Diego Milito was a hero on his return: he was out for a long time. We need results.
“The recent defeats have been heavy even if mathematically we are still in the fight. But they have been faced in a very lucid manner. Now we must try to find a solution as quickly as possible, but what has happened has happened and we are looking forward.
“I have also met the President and it was a calm meeting. We spoke about the things that aren't working. It was positive for the both of us to start again.”

Captain Zanetti told the 'real Inter fans' to ignore the media backlash and make their own minds up about the situation.

The Curva Nord responded to the Captain:

“The responsibility of the defeats to Milan and Schalke must be shared between the club, the Coach and the players, but we will be with Inter until death does us part.
“We only ask that the players finish the season like men and fight until the last second in Germany. Then we'll see how it ends.
“This team has got us used to great achievements. We believe. We want you to believe too.”

And I agree with all parties here. In times past, Moratti would have sacked Leo for a job poorly done, but it was two games, maybe the Juventus and Udinese games could be lumped in there too... okay 4 games out of around 20 that I thought he was at fault or lacking. It could be worse. It has been worse, see November of this year…

But I also agree with Zanetti. The team still has talent, I have never denied that, even if I am one of those asking for younger boots to reinforce the team. And the media has always been overly dramatic when it comes to Inter. Did we shit the bed this past week? Yes. Are we the only team in history to do so? No. We aren't the only ones to do it this season, let alone history. So I think that the fans have put forth a reasonable expectation. If we aren’t to win, be men, earn your place/salary/our love and try hard.

I can’t argue with that sentiment.

We are in for another rough patch: Chievo today, Schalke again on Wednesday, Parma on Saturday, Roma (Coppa Italia) on Tuesday, Cesena on Saturday.

Remember when we were all bored during the International Break? Wouldn't that have been a great time to play some games instead of lumping them all together like this every 3 or 4 days?

Chievo sit 13th in the table with 36 points, 4 points from safety and 6 points from the relegation zone. In their last 5 games they are 1-2-2 for 5 points out of a possible 15. Chievo’s last loss came from Fiorentina on March 13th and were only able to draw Sampdoria in their last league game.

The Chievo blog hasn’t been updated since November, so I’ll do the best I can here.

Chievo is a team that manages to hold onto top flight football despite having one of the lowest wage bills in all of Serie A. Historically the two teams are business allies, even if they are on the field rivals. Chievo rarely use their EU spot to bring in players so they often “rent” that spot to us for use of that player for a year. Also these two teams are often involved in player exchanges.

Chievo players of note are speedy counter-attack specialist Sergio Pellisier and Inter Baby Marco Andreolli, by way of Roma, who will be rejoining us in July, if rumors are to be believed. Kevin Constant is also a player to watch as, if transfer rumors in March and April are to be believed, he is supposedly the subject of a transfer derby between Milan and Inter. The formally French and now Guinean Constant is supposedly a hardworking, attacking-ish type of midfielder in the Kharja-ish mold.

Chievo always plays Inter tough (Doesn’t everyone? It’s one of the reasons supporters of this team celebrate like Champs when we win… we know that we earned it!) and coach Pioli isn’t backing down from a team in a higher tax or table position:

“We beat them already this season and can do it again. We’re not afraid of them.”
“That was a great performance in athletic, tactical and psychological terms,” said Coach Pioli.
“That, along with other results, teaches us that despite the difficulties of the game in hand, it is not impossible to think of picking up all three points.”
“It’s true that on paper, from here to May, we have a series of extremely difficult matches, but we must always give our best and push for the maximum, starting against Inter.” 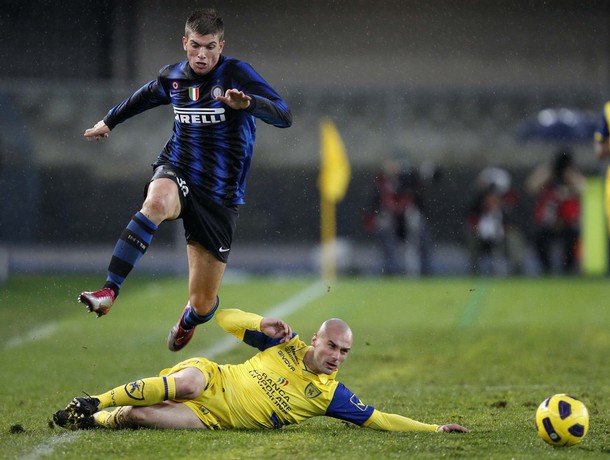 Come back soon and take your place