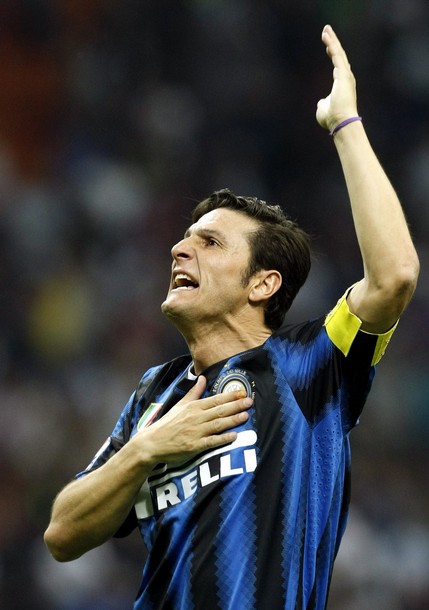 There are a lot of players that kiss the badge and play to the crowd in these days of video game like transfer scenarios and Monopoly money summer markets. Every other day a player who wasn’t on a certain team yesterday and most likely won’t be on that team tomorrow will score and kiss the badge, or the shirt or the flag.

When Javier Zanetti does it, you can take it to the bank.

It’s been 1000 official games for The Captain called Il Trattore. Javier Adelmar Zanetti is the Captain of a big team that everyone – outside of Inter - forgets about. After one thousand games, it’s kind of hard to understand why. I mean, the guy is always out there somewhere. He plays left fullback. He plays right fullback. He plays left midfield. He plays right midfield. He plays center… well you get the idea. He’s everywhere. And he really does play all the time. The fewest games that Javier has played for Inter in a season was during the 2005-2006 season, that number was 25. When I say the guy is out there somewhere… I mean he’s out there. He doesn’t take the bench, only playing in big games like some. He doesn’t play the second halves only. He doesn’t play every other day to preserve his legs like some do currently.

But this is the end-ish of the story. The Man says that he’s got another 2 years on his contract, until 2013. Right now he’s at the tail end of 37. In two more years time he’ll be right at the doorstep of 40.

The story starts in 1995 when The Man gets off the plane in Italy and starts playing for Inter. And I mean he starts playing as soon as he gets off the plane. He registers 32 league games, 2 International cup games and 5 Coppa games. That’s 39 games his rookie year in Serie A. You heard of people needing to take time to settle in? Incidentally, he scores twice that year from the fullback position.

His first Championship is the UEFA Cup where he scored one of the three goals in the finals that sank Lazio in 1997-1998. Incidentally, that goal was the second that he scored during the tournament.

He has been wearing an armband since 1999 a mere four years after he arrived and the first opportunity for anyone other than Lo Zio (Who really deserves a blog post all to himself) to wear the thing.

His first domestic championship was the Coppa Italia in 2004-2005 under Mancini. Javier played 49 games that season; unfortunately he didn’t score any goals.

The next year Javier won the SuperCoppa at the beginning of the season and the Coppa Italia at the end. This season would be the most trophy laden and the shortest for Javier as he only played 25 league games. Later he would learn that he won the Scudetto due to Calciopoli, but due to the World Cup and the confusion surrounding the scandal Javier and the rest of the team wouldn’t be able to properly celebrate the long awaited trophy – and The Domestic Treble.

I think we are all familiar with what happens in the 2006, 2007, 2008, 2009 and 2010 seasons professionally for Javier including all the trophies and Cups, but it’s hard to remember that while he was winning all these trophies, in 2006 Inter bought Maicon from French side Monaco for around 6 million €. There was no doubt that The Colossus would start at the right back position… Javier’s right back position. But Javier just moved up a layer of the team, into the midfield where he could both be an advanced line of containment and also cover for Maicon’s marauding. And he did. There was no argument or griping. He could make the switch and Maicon couldn’t, therefore Captain or no Captain, he had to move and make the position switch his own. He’d played in the midfield before, but that was because the coach at the time was using a 3 man defense. He hadn’t been displaced, before. But like everything else that has happened in the remarkable career of one of the greatest footballers of this generation, he took the change with aplomb and forged on ahead. 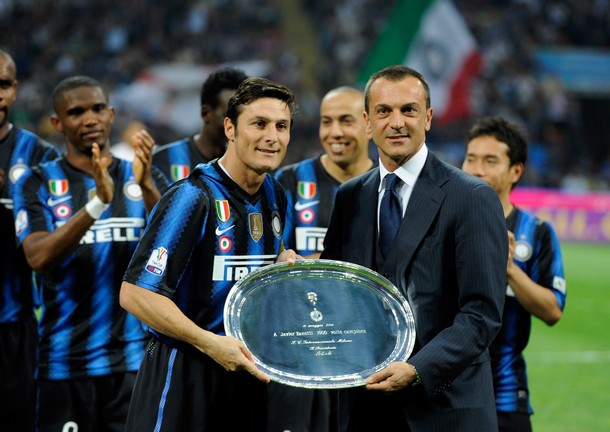 I said before that Javier is one of the most forgotten Captain of a big team in Europe and I mean it. Whenever some English language commentator talks about longevity in a club shirt, inevitably they will forget that Javier has been a beacon of this team for 16 years.

And Javier is a Great Player… capitals included, if there was any confusion. He’s an excellent defender that has been able to hold his own against the best that Italy and the World has to offer, and that alone makes him extraordinary. The fact that he can switch positions on the fly, his longevity, his personal/team trophy cabinet, his tactical genius and his ability to lead by Herculean example is only icing on a very large, impressively massive cake.

If there is a criticism that Javier incurs, it’s that he’s not a ball buster type of Captain. That he’s too soft spoken and too quiet to be an effective Captain. Personally, if the troubles that we had earlier this season and the subsequent rising from the ashes to make a decent League position showed me anything, it’s that he does his work behind the scenes and that he’s plenty effective.

Almost as an after thought, there was also a game last night. Smartly, I think, Leonardo unleashed the B-Team: Mariga, Chivu and Kharja. Mariga teamed up with Cambiasso to make a nice defensive midfield pairing, La Gazzetta didn’t think much of his effort but I thought that he broke up play nicely and he made the best cross to Pazzini on the night than anyone else. I marvel at his range and the area that he can be effective in. It’s obvious that Leonardo probably wanted him to play higher up the field, but that fact that he stayed back and helped cover was a good way to help preserve our lead in the tie and in the game – even if it seems that he was cheating back against orders.

I thought. Chivu played a much more calm, in control game as a center back than in either of his earlier two outings as a center back (Milan, Schalke 04) – but maybe that’s just a result of this being a Coppa Italia match. I thought that his yellow card on the technical foul was the first good foul he’s made in a while. He was clearly beaten and the defense was going to be roasted. Stopping play and sacrificing the card with only 30 minutes or so left in the game was the best tactical move. 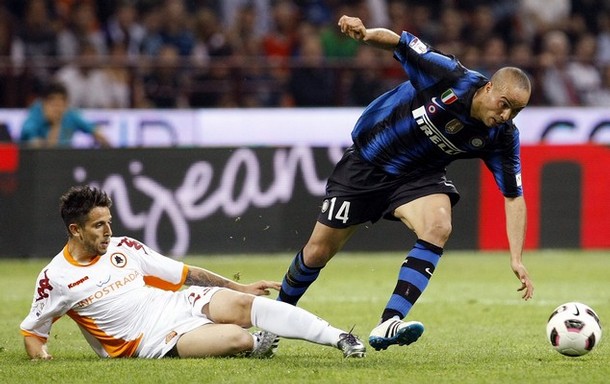 Kharja deserves a lot of credit for his game yesterday. He was supposed to be player that feeds Pazzini and works the ball up the field with Eto’o. He did some of that, working mostly on the left, but he also came back to help out a lot and he stopped some plays from Roma in the midfield from developing. He did a good all-around job, even if his stated job was to be more attacking.

I also want to give special notice to Nagatomo who put in another tireless performance. He saved out butts twice in the back and he balanced the formation out by being a threat – at long last a threat – on the left to act in counterpoint to Maicon threatening up the right. The Roma defense got stretched several times including on Kharja’s ball that turned into Eto’o’s goal and the non-penalty call that Milito should have gotten. All of that was a result of the Roma defense trying to cover a much wider area than is usually needed against an Italian team.

This victory gives Inter the chance for their 3rd piece of silverware for the season. 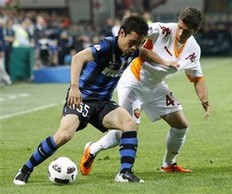 The B-Team and Nagatomo are the MIPOG making this historic night for one of the best and brightest in Inter history also, if somehow less impressively, the first time we have 4 players who I thought were instrumental in our win, even if all they did was mostly play in their tactical roles.