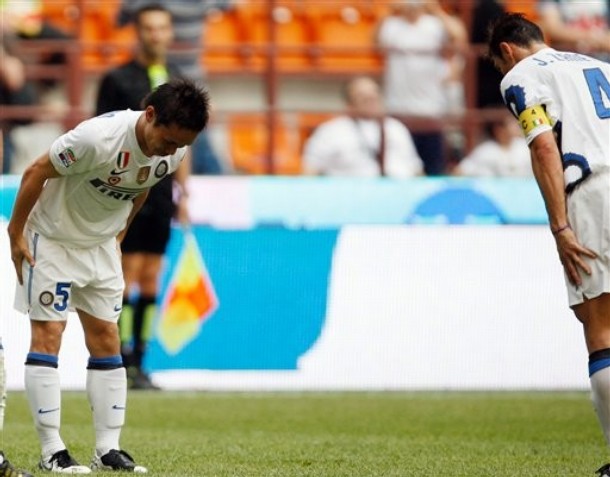 Okay first things first – thanks for the LiveBlogs all season Kirby. They have been consistently awesome and you are the reason for that, so thanks for making watching the games fun, even if the games are stinkers.

Forgetting for a moment that I have been a little absent for a week or so – it’s really far too boring to get into and anyone present at the last LiveBlog knows how far I am from the current, big news – and forgetting that both last week’s and this week’s games were little more than three teams dancing their way to the end of the season, but I want you all to take a good long look at those three teams and those two scores for just a minute.

This is the way things should be, if it were the middle of the championship. Draw away to the difficult third place team and win big at home to mid-ish table.

But think of the points we squirted away, points that were there for the picking, from the relegation battlers. 3 points with Chievo, 3 points away to JuBe that Eto’o could have collected on his own practically if he converted 2 out the 3 golden chances he had. 4 points wasted to Lecce and Samp. 4 points wasted to Brescia.

Ghosts of Serie A Games Past… All I need now is Jacob Marley and an Urchin.

Having said all that, life is for the living and now it’s time to look forward to the silly season to star… errrrrr… continue onward from last January.

But first a look at the “highlights” of the last two games. I am not going to waste either of our time with a Pagelle or such. I think we all know that these two games were largely for show purposes. It’s a reality of Italian football that players don’t waste their energy playing for nothing. I don’t mind it at all and I suspect that most of you don’t either, or you wouldn’t be here.

I don’t have any problems showing this highlight from the Napoli supporters point of view. It was a draw that was “destined” and it put such joy in the faces of one of the best crowds in Italy. You always see kids in the stands having a good time, even if Napoli Ultras have a bit of a wild reputation. It’s a little embarrassing to think what kind of money a team like Napoli could have if they had their own state of the art stadium. Like Inter, I think that they could draw in good times and bad.

But moving on, because it’s the time of year for things to get on with it, so to speak, Inter took on Catania, a team whose itinerary on Sunday was:

1. Get off plane.
2. Play game as quickly as possible with as little contact as humanly feasible
3. Go the hell on vacation

If Inter were one day away from vacation, I think that I would be here writing two of these itineraries. But Inter still has a game yet to prove themselves in and it’s a game that they want to win for pride’s sake, so they tried in this game, up to a point we’ll call 3-0. Then it was all about Palermo.

There is one more game to play and ideally the whole mercato mess would wait until that game is over so that the teams still playing won’t have to deal with distraction. But that’s just not going to happen.

Since we are stuck with Mercato Madness and there is nothing I can do about it I would rather continue to speculate about who we might keep/lose. Not too long ago I wrote an article about who I thought is a lock to stay, who’s on the bubble and who I think is ready to move on.

Milito was one of those that I thought was on the bubble. Lately Moratti has come out and said that that Milito is not going anywhere 100%. I have to reply to this. I think that this is the right move. 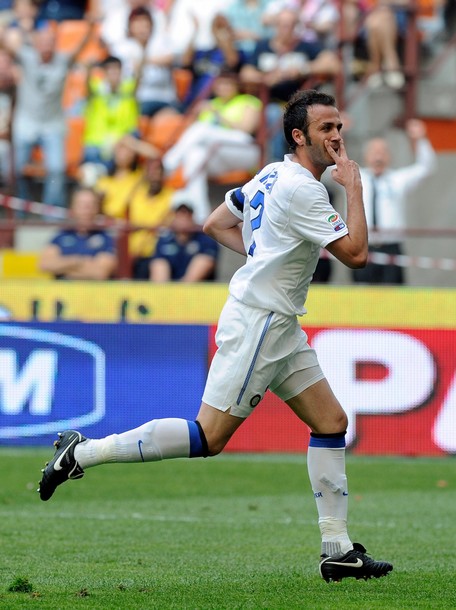 If Moratti thought that Milito was too important to let go at the end of last season – when Milito was at his most valuable – then betting on Milito longer term is the only way to go. If Milito can recapture ¾ of his form from last season for next season then he’s going to be a valuable member of the team. Of course, he’ll be even more valuable to the team if he can be convinced to renegotiate his contract a little so that he’s not such a big hit in the wage bill to reflect his reduced role/importance to the team.

In that article I linked to, I also said that there was no way that Wes would leave - also that there is no way that Moratti would sell him. There have been several quotes from the player and his agent to say that he’s happy at Inter. It’s not unusual to figure this out. Wes’s last place of employ treated him like shit and kicked him to the curb… in much the same way that Cambiasso was several years before. Inter has been a home to both and has been embraced by the entire society. It’s no surprise that it was the same team that made the same mistake with both players.

Talking about Real Madrid, it’s time to embrace the cold hard truth about Financial Fair Play. It’s coming, we all know that. It’s going to be here to stay, we should all know that. It’s being implemented with an eye to institute some measure of fiscal responsibility, I think that we can all see how that would be helpful for the overall health of the club we love.

But here is the thing that I don’t see many people talking about. It’s that FFP locks your club into a certain “Money Bracket”. Inter will never make as much as Bayern Munich, ManU, Chelsea, Aresenal, Man City, Real Madrid, or Barcelona. We will never make more money than they are making and more importantly, nay CRUCIALLY more importantly, we will never be able to spend more than they will be able to when FFP hits its full stride. Once we are locked into only being able to spend what we make – for the better health of the club, something that I agree with wholeheartedly by the way – we will also, by definition, be limited by that income.

Okay, that was something of a downer so I will end this little shindig with this: Luca Caldirola has already returned to Inter’s training ground and he’s been training with the first team.

Who is Luca Caldirola, you ask? Luca is a 20 year old center back who spent a season on our Primavera team as Captain and then went on loan to Vitesse in the Eredivisie. He also has been on every Italian National Team starting at U16. Right now he’s waiting for a call up for a tournament in Toulon with the National team.

I don’t know what the future will hold for Inter and Caldirola… if there is one. He might be loaned out again. He might be considered for a roster spot. He might be used as makeweight for a bigger deal. Either way, he’s currently an asset to the team and I am mildly interested in how he’s going to be incorporated into the plans of the team. 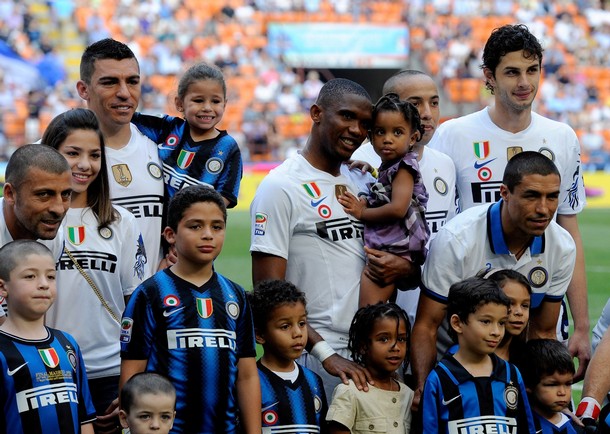