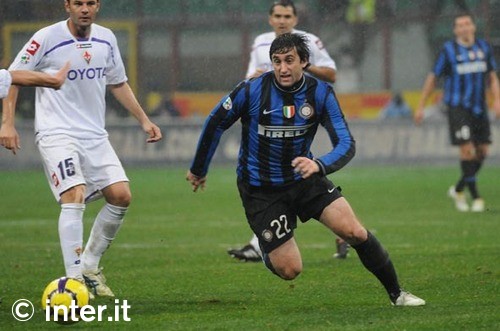 As much as I really love watching Inter, I am ready for this season to be over already. In fact, I wouldn't be opposed if it ended right before this game. We are in second - a reasonable end to our crapstorm of a season - and the thought of having to cling like baby spider monkeys just to maintain makes me tired. And I dont even have to play the games. But alas, I have no power with the FIGC and these last few games must be played. Fiorentina is next in line and, even though they have stumbled a bit this season, they are back on track and an Europa League qualifier spot is not out of the question. Which means they have everything to fight for and nothing to lose. Inter, on the other hand, have our second-place finish on the line. And with Napoli breathing down our metaphorical baby spider monkey necks, the only way to keep from plummeting to our doom is to take all three points - as difficult as that may turn out to be - and hang on for all we are worth.

What: Inter v Fiorentina
Where: San Siro, Milan
When: Sunday, May 8 (that's Mother's Day here in the U.S.), 3pm local time (6am pacific, 9am eastern - so early, so very early).
How to Watch: Live on Fox Soccer Plus and ESPN3.com; ppv at FoxSoccer.tv; or you will have to stream it (MyP2P, Rojadirecta, Ustream, and ATDHE.me).
Liveblog: Dunno. Kirby? It is a bit early for me here in Seattle.

Inter has a fairly good record against Fiorentina at the San Siro. Out of 73 games played, Inter has won 42, drawn 18, and lost the remaining 13. In addition, Inter has outscored Fiorentina by a factor of 2 (140 goals for, 74 goals allowed). Inter has not lost this fixture since the Viola kicked the snot out of us, 0-4, in 2000. That was also in early May, almost 11 years to the day... Auspicious? I hope not.

The last eight San Siro meetings have all finished in Inter's favor. Last year was a very close and cagey match. To put it into a bit of perspective, both Quaresma and Vieira played in this game. It looked all set to finish 0-0 when Milito won then converted a late second-half penalty. In the end, that goal was all we needed to win the game.

I dont think it is a secret that I have a soft spot for Fiorentina. They are a good team from a lovely part of Italy with some exciting young players. As an added bonus, their fans here on the Offside are a fun and witty group of people. If anyone from this board finds their way over to the Fiore board (and you should go - they are great), please be respectful and, well, nice. I would really appriciate it.

Hokay. As I said, the Viola had a rough start this season. They lost one of their brightest talents, Jovetic, early in the season, and have struggled a bit. As such, they come to this game in ninth place with 49 points. They are only 7 points from seventh place and a possible Europa League qualifier spot, though, so there is still a whole lot for them to play for. Certainly three points from Inter would be welcome. Since Inter beat them in Florence, Fiorentina have been on a bit of run. They stumbled against Milan but came back in full force to kick the pants off of Udinese last week (thank you very much!).

'Course, all of that was at home. Away, things are still not so rosy for friends in purple (which could be because pink and purple are just too daring a fashion statement for them). Overall, they have only won 3 games away from home. Even worse, they haven't won any away in their last five. Not that they cant turn that record around or anything.
And it isn't like they cant score goals or anything: Gilardino has 11, Cerci has another 5. Hell, even Mutu, who spent most of the season suspended, has 4. And word is, Vargas is back and looking like his old self. There is even some talk that Montolivo will join the ranks of the Beneamata this summer. So they have the talent. 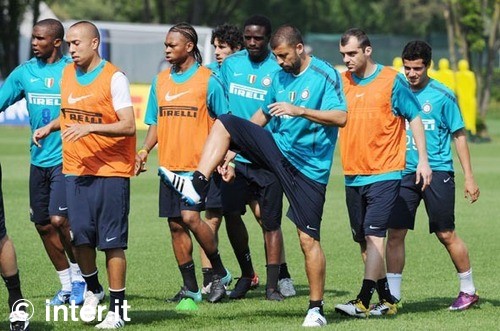 We are waiting for you, Samuel.

Leo has somehow found 21 players to call up. Of course, he had to dip into the youth team to do it:

Sneijder, Stankovic, and Cordoba are still out injured. Thiago Motta twisted his knee in training today so is out of the squad. Which is probably why we have only four midfielders to be called up. Yikes. I hope that doesn't mean we will see Chivu in the midfield again (shudder).

It is nice to see Samuel back on the list. I wonder if this is a real inclusion or like that Champions League game: just to boost his moral. It would be great to see him back on the pitch his season. Speaking of speedy recoveries, it looks like Pandev wasn't hurt nearly as bad as we all feared. He is here and I would assume ready to go.

This is the leadup to a very special game for Javier Zanetti (no doubt, he will play): this will be his 999 competitive game in his career (who counts these things?). The second leg of the Coppa Italia game will be his 1000. I hope someone got a plaque or something to commemorate the occasion. Leo says that only nine players in history who have achieved this goal so I guess that makes our Captain pretty special (like we didn't know that already).

Given our dearth of midfielders, La Gazzetta thinks Leo will push Naga up to the midfield (yikes):

And that does not make me very happy. Or confident. It feels static and stuck together with packing tape and staples. Hopefully I will be proved wrong, but ... well... ugh. But hey, maybe the paper is wrong. If you want to throw your hat into the ol' Grand Imperial Poobah of All Things Inter ring, then drop your line-up in the comments below. You never know, you too could be our next GIPATI. How cool would that be? Super cool!

So, these next four games will make or break us. Napoli is sure to make mincemeat of poor Lecce, leaving us in a very precarious situation. Plus, we have Roma midweek and the Coppa Italia has now become a priority (any port in a storm). Luckily, Lazio and Udinese have slipped a bit so there is a bit of a cushion between third and fourth (whew), but after letting first slip through our fingers in that horrible derby, it would be a horrible shame to now let second go as well. But Napoli is a good team. They want it as bad as we do - maybe even more that we do. Which is my real worry. What if, like me, the squad is just sort of ready to give up and go to the beach? But maybe I am projecting.

Ok. Only four games left (or maybe 5). Three games to secure our Champions League spot next year, hopefully two games to take something home this season, then a couple months at the beach and a chance at a whole new start. I know it's a longshot, but hopefully we can finish the Serie A on a high note. Like second. Fingers crossed.

Because he seems to be a bit of a favorite around here: