Share All sharing options for: Gasp! It’s a New Coach. 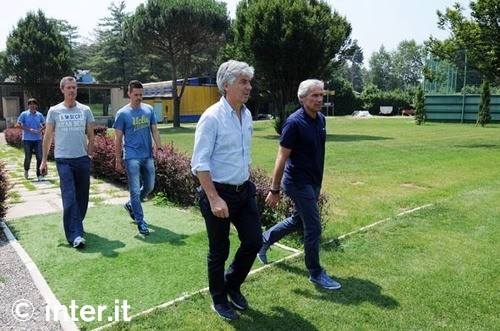 So the coach has been officially introduced and there has finally been some news in the co-own/loan front so I thought that it was a good time for an update. Gasperini's official first presser will be the first Tuesday of next month, I think.

The 53 year old coach was widely believed to be the new man in charge of Inter from early on so we can’t say that we haven’t been warned, but the whole trial was an ordeal made much worse from all the incorrect and speculative media fear-mongering. As it turns out there was only one other coach who was approached for the job – Bielsa.

Gasperini had a well travelled playing career. The Torino native started his youth placement at JuBentus in 1967 at 9 until 1976 at 18. He played sparingly for some Coppa matches in the next year until he was loaned to Reggiana and then sold to Palermo, who at the time were perennial Serie B dwellers. Gasperini was present with the team when Palermo lost to JuBentus in the Coppa Italia finals in the late 70s.

The highlight of Gasp’s playing career was when he joined Pescara in Serie A in the late 80s – more on Pescara later. After Pescara he went back down to B and then soon after he dropped down to C. Gasp ended his playing career with Vis Pesaro, whom I have never heard of before. Wikipedia tells me that this 11th oldest club in Italy plays in Pesaro, Marche and in 1991-1993 when Gasp was with the team it went from C1 to C2 and then bankrupt where it had to start over in Serie D.

After a playing career in 8 different teams Gasp decided that he would go into coaching. JuBentus took him back and put him in charge of the Giovanissimi. He then moved up the ladder until he was in charge of the Primavera. All told he spent nearly a decade climbing the youth ranks as a coach until he left for Crotone, perennial Serie C and Serie D dwellers. He left after 3 seasons for Genoa.

I don’t want to go into the modern history of Genoa here, but for those who didn’t know, Genoa, one of the oldest and once one of the storied clubs of Serie A, were essentially Serie B dwellers from the mid 90s until the mid 2000s. They got a new owner, toy maker Preziosi, who was willing to spend and were about to promote into Serie A when they were hit with a match fixing penalty. Their penalty was minus a half dozen points and a drop in division to C1. They promoted out of C the next season and were getting ready to fight for Serie A when they hired Gasp as their coach in 2006. He got them out of B and did very well his next season in A getting the team to 10th. In 2008-2009 he tied with Fiorentina on points but lost placement on head to head (3-3 home, 0-1 away) so he finished 5th. In the 2009-2010 season Genoa finished 9th despite losing Milito and Motta to Inter. This last season Genoa had a terrible start despite a boatload of new signings and Preziosi decided that it was time to pull the plug.

Gasperini has proven that he can coach in Serie A and generally his teams manage to place pretty decently, considering Genoa’s low wage bill of €35 million, despite refusing to play ultra conservatively. Gasp’s downfall at Genoa was a combination of perhaps an owner too willing to tinker with the team from year to year and the coach’s unwilling to change tactics when provided with different players from year to year.

Once we get a chance to see his formations and personnel choices I think that we will then get a better handle on his tactics. Things I would for in the future would be more cooperation of the collective. Instead of the several 1v1 battles of Benitez and Leo who basically let the talent of the individuals take on their opponents, I think that there will be more of a team-based attack and defense. That is, more support in defense for the back four and more off the ball movement in the attack instead of all the standing around we sometimes saw. If I had to guess right now, I would guess that Gasparini will be using a 433 formation with Sneijder as a false 9. But that's just a guess.

Official deals for the youth sector, loans and co-owns that I cribbed from many places like the FORZA INTER FORUMS that are always good for a visit.

** There is a lot of talk about Rodrigo Palacio incoming to Inter. I doubt this news just because it goes against the policy that Branca has established these past few years and the tendency of Inter not to supply new coaches with hordes of their former team. I like to think that Branca considers our players better than those that most coaches would like to bring just for Linus Blanket-like security. I would consider the Vucinic rumors to be more likely only because he’s younger, more versatile and can occupy the same wide-ish position behind a striker as a Palacio.

**There is lots of talk of Moratti “falling in love” with Alvarez. Alvarez is 23, he’s 6’2” and he’s billed as a twin of Pastore but his price tag is less than €15 million instead of over 50. There is also a rumor that he has an EU passport. If I had a model of the type of players Branca is trying to install in this team, he would be it. Downside is that he’s been considered injury prone and 23 is a little late for a South American star to cross the Atlantic, one wonders why.

** Jonathan, the Brazilian fullback, is considered 100% Inter but there is no confirmation anywhere so I am listing it as still rumor. Considered competent to good if not amazing, he can play on both sides of the defense and was rumored to cost about €5 million. Jonathan is 25 and has an EU passport. He’s considered a step down when compared to rumored €30 million star fullback Danilo, but a better prospect than most others.

** Casemiro the MF from Brazil that we are heavily linked with will only happen if he doesn’t sign an extension with his current club. His current club (San Paolo?) want him to sign the extension so that they can put in a 30 million transfer out clause to take advantage of all the unexpected interest in him.

** There are very strong rumors that Inter are the first in line for MF Poli from Sampdoria. Once again, he fits the profile of a player just before his prime, cheap-ish, hungry and with a reputation of dynamism. I think we are going to get him on this team.

Okay, that’s it for me just now… check out Johonna’s twitter feed and if there is any more news or good rumors/dream lineups/FM updates, please, post them