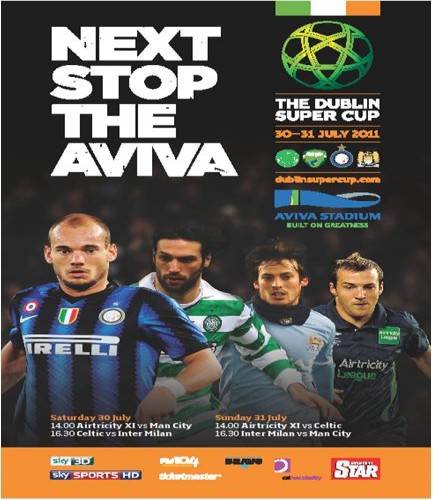 As the summer grows longer the trials that Inter set up for their training program grows harder. We started this new journey with 2 Serie D sides and then rose the difficulty to Serie C – I still won’t call it Pro Lega. We increased difficulty with travel to Germany to face a top flight team that in midseason form we should be expected to win. Now we are going to increase difficulty again and we are going to increase our travel time as well.

Inter are off to Ireland this weekend to meet Celtic, Manchester City and Airtricity XI, “…a team selected from the best players from Ireland’s top domestic League” – whatever that means but if you are curious there is a link to their website but we don't play them anyway - in the inaugural Dublin Super Cup. The tournament is a two day affair and teams will play two games each.

Gasperini has called up 24 players for this friendly tournament:

I think it’s important to remember that English teams are always ahead of us in physical training in the preseason. I wouldn’t be surprised to find that Celtic is ahead of us too. It’s also worth keeping in mind that we will be trying out several new formations from last season. In the past 4 games Gasperini has incorporated 4 different formations, not necessarily one each game: 3412, 343, 442 and 433. I wouldn’t be surprised to see him break out the old WM or the inverted pyramid at this point.

What I would watch out for is the way that Ricky Alvarez deals with the step up in difficulty. I don’t think it’s a stretch to say that we will be using him from day 1 if we can and how soon he adjusts from South American ball – if he adjusts – will be important.

As always, I would also check out those young players that I mentioned in the last post. There are going to be 2 opponents of Champions League – ish material on consecutive days who will probably be in better shape than we are. I don’t think that we will have anyone on the bench who won’t log in some work this weekend.

Yuto, Lizard King, Thiago Motta and Wall are all coming off time on the injury table. I would be interested to see how these guys react to game action. We all know how fragile Thiago Motta is and this time last season is when he got an injury that accounted for almost 5 months of down time for him. If he makes it to opening day, it’ll be for the second time in his 3 seasons for us. I am hoping he’ll be available.

The team won’t be coming back to Italy after this tournament as they will fly out to Beijing – via Paris – to take part in the Super Cup on August 6 with BBilan. As everyone here should know, we won’t be using any of our South Americans who were involved in the Copa America with the exception of Julio Cesar, who is coming back to the team early due to the injury of Viviano. Personally I would have liked to see him take more rest, but the world ain’t a perfect place, is it?

Some thoughts from the Gasperini interview on Inter.it, translated for your pleasure:

"Competitions like this one are useful: important matches, and close to the pitch so you can see all the players in action. For us the situation is a bit different, strange, because some South American players are missing because of the Copa America and the U-20 World Cup. And it's also strange because immediately afterwards we have Beijing, but these tournaments are important. Against Celtic it will be a challenge with a historical flavour, but we just started the preparation, so for us it'll be an important test to raise our level, to try out different solutions and all the players. In view of Beijing the positive aspects certainly outweigh the negative ones, with many new features, including myself [smiling, ed.]. Now come the important matches that verify the work done. I find very little on the negative side."

He then spoke of Roberto Mancini, who was Inter's coach: "He's part of an important period in the history of Inter. He won with Inter and he has continued to do very well with City. I don't have a personal rapport with him, but I highly regard him and I hope to have the same success that he had at Inter."

The coach continued: "I don't think that in these two matches we'll play the starting team for Beijing; we'll mix things up a bit, especially to improve our conditioning even more. Then we'll have one week to prepare specifically for the derby. Sneijder? He'll play again as a midfielder because he has done very well and can do very well. When will Julio Cesar play? Probably against Man City, having arrived today."

In this case there are 2 “thems”. I don’t know a huge amount of detail about either of these teams because I don’t watch either of the leagues that they compete at. Both teams are advertised to be bringing strong first teams and there is also a chance of Manchester city bringing their new striker, Aguero. Here are the sites for both Celtic and Man City (Jeez they have a million players) if you are at all curious about their rosters. Inter have a connection to both teams.

Inter had just won their European Cups (formerly and correctly called the European Champion Clubs’ Cup, we call it the Champions League now and it’s a completely different format) – against Real Madrid and Benfica – in consecutive seasons. They missed on a chance at a three- peat as Real Madrid won their 6th. Anyhoo, the next season there was a chance at a third European Cup and it was Celtic that stood in the way in front of 50,000 people in Lisbon. Inter went ahead 1-0 on a penalty by Mazzola, but Celtic scored the next two in the second half. It was the first European Cup for a British side.

On a more modern note, the Celtic captain has this to say about the up coming tournament from Celticfc.net:

This weekend will see Celtic take on Italian giants, Inter Milan, on Saturday, before facing a tough battle against Airtricity XI, a League of Ireland select, less than 24 hours later in the Dublin Super Cup.

The high standard of competition has been welcomed by the Celtic camp as they bid to improve their match sharpness ahead of the return to SPL action next weekend and the Europa League qualifiers later in August.

Hoops skipper, Scott Brown, feels the only way they can be properly tested ahead of these key ties, is to face such top quality opposition.

“We’re trying to get closer to these teams,” he said. “We want to play European football. We’ve got a qualifier in two-and-a-half weeks and hopefully we can get past that and into the group stages.

“If we can manage that then it shows we’ve evolved over the last couple of seasons. It’s been a hard couple of years for the club but we seem to be going the right way and I’m looking forward to it.”

The Inter connection with Mancini is much more recent and much more… emotionally muddled. I would be interested to see how Inter supporters here at the Offside regard Mancini. Personally I used to love the guy because we won trophies with him, first the Coppa Italia and then the Scudetto. It didn’t matter to me that the side was found lacking in the Champions League, especially when you looked at how we left it – The brawl with Valencia, we lost due to away goals, in which the players of the Spanish side did more running than fighting (By the way, Toldo was ever my hero after he threw himself into the Valencia locker room). And the Liverpool tie in which we were forced to play a man down in each game and we lost Cordoba to injury after already having lost Samuel.

I didn’t blame Mancini for either of those Champions League “failures”. The quotes are because we accomplished the main goal of the current Champions League format – make the Round of 16 and cash in. My relationship, as a fan of course, with Mancini ended when he quit in the press conference after the Liverpool game. Wow, was I disappointed with him. No one wants a sniveling quitter as their coach and if it was all too hard for him then maybe it was better he left. I certainly didn’t mind the Mourinho years that followed.

Okay, that’s all I got on these games, because it’s late and I have already talked about 2 friendlies for far more than they are warranted. Hey, it’s preseason for me too, you know? I haven’t decided if I am going to continue the game commentary twitter thing I have been doing these last couple of games, ‘cause it’s hard and I miss chunks of the game. If you want to stop by and be sarcastic to me, that’s fine because I will definitely be sarcastic to you... if I remember to check the damn thing. Its Inter_MAD@blah blah.blah you know it already.