Share All sharing options for: SuperCoppa Let Down… Or Was It? Milan 2 – Inter 1 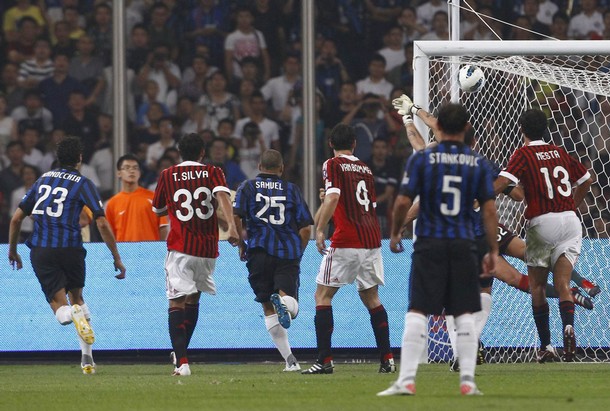 So another SuperCoppa that Inter has taken part in has come and gone. And although I am disappointed in the manner in which the game was refereed – and I am not the only one – there are things that I think I can take away from this game as positives for the season to come.

THREE POSITIVE THINGS TO TAKE AWAY FROM THIS GAME

1. Andrea Ranocchia, Joel Obi, Ricky Alvarez and Luc Castiagnos. Inter’s Young Guns had a hell of a game. Andrea was very solid and Joel was a terror on offense and defense for BBilan on the left. Moved towards the middle, Tricky Ricky was much more effective than he was against Galatasaray out on the wing. On two separate occasions Zambrotta was forced to grab and pull on Ricky’s shirt to keep Ricky from toasting him. Luc came in at 82 minutes and made an immediate impact also beating Zambrotta and delivering a beautiful cross to Eto’o who missed the volley.

2. Cambiasso, Maicon, Coutinho and Lucio. These guys were main contributors last season and they had zero appearances on this game. Factor in Walter Samuel’s recently reconstructed knee and we seemed to more than hold our own at times without a large portion of our "first" team. I can't help that this bodes well for the myth of team rotation during the season. We will need to rest our guys effectively, something we didn't do well last year.

3. Gasperini’s formation doesn’t seem to be hurting us. In fact, all the things we seemed to not like about last season’s team were not in evidence – in all the first half and 25 minutes of the second. We were pacey, active and pressuring BBilan up and down the field forcing them into a long ball game at times. The defense also wasn’t that bad as it pitched a shutout for 55ish minutes. Their first goal came only when they physically hauled our defenders to the ground and it was only the second shot they had up to that point. So after 3 weeks of training we end the game without any injuries, having dominated the Serie A Champions for a half and generously used our young people. I don't think Moratti can find any fault there.

3A. Sneijder seems to be still on the team. Shocking, I know, considering the sources…

THREE NEGATIVE THINGS TO TAKE AWAY FROM THIS GAME

1. We had a 20 minute blackout against a team that we shouldn’t be blacking out on. It can be hoped – by us Inter supporters - that the 3 weeks that Gasperini had to train the team hasn’t been enough to work out the kinks but I don’t think that’s the cause of the blackout. I think it’s because Gasp was trying to go against his nature and tried to play it safe by dropping Zanetti into the defense and subbing out Alvarez for Faraoni didn’t help. I didn’t think Faraoni was so bad, but we were pressuring well with Alvarez. I thought that we would want to attack more at 1-1 not less. Eto’o was left all on his own several times and any forward needs to have support. The inclusions of Pazzini and Luc was far too late.

2. Chivu seems to be unplayable at CB in a 3 or 4 man defense. Sorry Kirby, but I think it’s true. As a LB he’s decent and far enough from the center of the field so that if he screws up he has support. As a CB there is no safety net and he’s on a trapeze with a rope frayed. Lucio will be back very soon. Caldirola is still on the bench. Dare I say that Cordoba is a better option? Matteo Bianchetti is still officially on the team but I have no confidence that he’ll be there three weeks in the future. I would like to remind everyone that all the 30+ defenders’ contracts are up next summer. Lucio looks like he wants to renew. I wouldn’t be surprised if Chivu is gone this time next summer.

3. Mariga, Muntari and Crisetig weren’t used in the midfield and Deki was. I have to believe that Gasp would have wanted to give Deki a rest for his knee. The only thing I can think to explain this is that Mariga and Muntari aren’t long for this team. I understand that they need to go, but I think Mariga is perfect for this style of play. I hope that all this is in aid of us replacing the 2 of them with one “quality” player. Casemiro? Kucka? Who can tell how those players would assimilate into the team.

Do the positives outweigh the negatives? Hard to say. The team doesn’t really feel “finished” yet… does that sound strange to say? I will say this – I am now happy that TPTB scheduled such tough “friendlies”. We need all the real world practice we can get.

Coming up in the next week there will be a wrap up of the second half of our friendlies that I didn’t get to earlier. Also in the coming week or so I want to talk a little about NextGen and how much fun that should be.