Share All sharing options for: Palermo 4 – Inter 3: The Good, The Bad and The Ugly 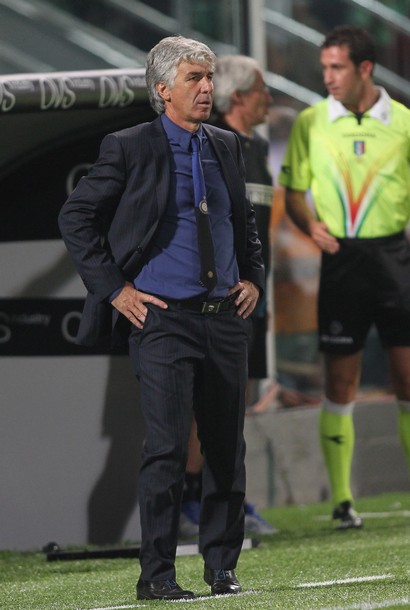 There are lots of talking points regarding this game. Was the non-expulsion to Migliaccio decisive? Who’s at fault for this? Who can we castigate for this? How do we fix it? How long does Gasperini have? Changing to a 4 man backline will change everything, right?

When we were looking for a new coach I thought that Delio Rossi was the way to go. I liked how his Palermo team attacked the wings and I liked how his players responded to him. Gasperini was chosen as the new coach and he obviously had no problems being honest with everyone from the get go – he was going to play with 3 in the back. The players- at the moment - are still with him.

If there is one thing that I hate about the Italian game it’s the way the coaches are treated. The refs are treated like shit, and frankly, they deserve it as most of them are pretty terrible. But most of the coaches who work in Serie A, on average, I think are much better than their counterparts from other European countries. I think that they are years ahead of coaches from South America. But you’d never know it by the way they are treated by team presidents and I am including Moratti here.

But not all the blame can be laid at the feet of the presidents. There are legions of coaches who are willing to step on their colleagues for a working position. I hate changing coaches so often. I understand all the money that’s at risk, but I always thought that in the long run having a bad guy for a year or two was better than having the team to adjust to two guys. I think it’s better for business as well. Unfortunately – or fortunately rather, no one asks me my opinion at headquarters…

I thought the Diegos did very well yesterday. Forlan didn’t give up at 4-2, which is a hell of a lot more than I can say for Julio Cesar. I’ll get to him later, believe me, I’ll talk at great length and vitriol later.

Forlan didn’t give up at the end and I saw him come back on defense to cover deep. Considering his pedigree and his age he could have claimed that it wasn’t his job to cover and he’d be partially right.

Milito scored twice including the penalty that was belatedly given to us. Last season, we knew that something was wrong with Milito when he missed a penalty. A double on the first game is a nice way to show that he’s not the ’10 - ’11 version.

Jonathan was much better yesterday than he was in the previous games he played. He bombed up front when able and he didn’t look afraid of the crowd, which is more than I can say for the ref, who looked like he was going to piss himself. He went deep into the Palermo half a few times and he came back a few times, other than that he battled on the sidelines which was his job, really. He also showed some speed. Do I think that he’s Maicon of ‘09? No, but he’s not bad either and I appreciate the improvement.

Ricky Alvarez, I thought did a good job going forward and to his credit he was no worse than Deki coming back. He switched with Sneijder quite a bit, which is a good thing but I didn’t see him switch or drop into the defensive area, either. It’s a bit of a mixed bag, really but I think there was more good than bad.

Nagatomo had a nice return from his shoulder injury. He wasn’t spectacular, but then again, he didn’t really make any mistakes either. He was solid.

Despite the media already conceding that we will be relegated, losing to Palermo at Palermo isn't the end of the world. It can be reasonably hoped that several top ten teams will lose or share points in Sicily.

Zarate was bad. He looked out of his depth, which is really stupid because he’s been in this league a while, including the Roma Derby and he’s handled it. Anyway, whatever the reason he was all over the place and he looked panicked.

The age of the squad on the field was bad. The backline had no one under the age of 33. It was starting to be an issue last season, but no one wanted to look at it because there were other scapegoats to blame for last season. It’s going to be an issue if we are going to make Walter Samuel playing in space. He’s lost a step getting to the tackle and he’s only months away from serious injury. Lucio wasn’t bad and Zanetti had his moments, but they are playing a three man zone. They need to react faster to players coming into their area.

Related to the immediately preceding paragraph is the fact that Dejan Stankovic is still bloody starting at the age of 33. I like Deki. I get that he’s a coach’s wet dream. I am a coach in some of my off hours and I understand that he probably works really hard at training and that he’s well liked. He’d probably run through a brick wall for a coach and they love that shit. It sets a good example and an object lesson. But this is the kind of thing that will cost games until Gasperini realizes that he can’t give significant minutes to players like Deki anymore. Deki doesn’t come back to help. That’s why Lucio, Walter Samuel and Zanetti are forced to step up into space and pressure the ball. They are reacting out of their zone and by the time they get up to the gap between our midfielders and our defenders are they are already too late and out come fouls and cautions. The Midfielders in the middle need to drop and they aren’t.

They did with Mancini. They did with Mourinho. Hell, with Mourinho the primary job of the midfield was to cover the defense. Zanetti covered for Maicon. Muntari and Motta covered for Chivu and Santon. Cambiasso would cover for Lucio on his forays. That went away with Benitez and it stayed away with Leonardo. Gasp wants the midfield to go forward with the attack and then run back on defense. The trouble is that:

Until they work out that glitch, it’ll be more of the same for the second season running, 3 in the back or 4 in the back, it won’t matter. The whole reason why there are specialist positions like the Defensive Midfielder is for exactly this reason. Sometimes more coverage is necessary.

I am going to start my Julio Cesar rant now.

It starts like this: I was and am still upset that the team sold Viviano for this very reason. I know that he’s injured at the moment but selling a 20 something promising player when you have a 30 something vet with a high price tag and the yips is dumb. I don’t know anything about Kuck or whatever that guys name that we are trading Vivano for, but he’s not worth it, unless he’s a guaranteed starter – and no one can guarantee that. I had no problems with Mancini until he gave up on this team. I loved Cesar until he gave up on this team. Rumor is that we had interest on Cesar from England? If they are stupid enough to buy him, then I say let him go.

People are going to say that I am overreacting. Which is pretty rich considering all the “fire Gasperini” and the “343 formation won’t work” comments I am seeing. After one, single meaningful game. We advanced in the Champions League last season in spite of Cesar. We ask him to do a lot on this team, but he also gets a ton of people defending him when he doesn’t deserve it. Castellazzi is a decent player, but he’s not the answer anymore. Vivano could have been the answer but we were so damned eager to shove him out the door. Sirigu, like Cavani last season, begged us to take him – and he would have been cheap as hell – but like the 100 year old combined defense we sent out there last night, it’s just to unpleasant to change up. Cesar is now persona non to me. The sooner we sell him the better. I’ve about used up all the patience I ever had on him.

I sometimes wonder which would be more unpleasant, changing out old players who are no longer reliable gradually or the feeling that one gets when it’s finally figured out that the problem is too big for one season to change. Are we there yet? Are we going to learn from our lesson yet or are we going to keep blaming the formation, like we’re in the EPL or something?

Also in the ugly pile was the ref, but there’s nothing new there. The Palermo defender who played hockey goalie with his arms should have been sent off, everyone with half a brain and an ounce of honesty sees that. But, when you root for Inter, you have to expect that kind of thing. It happened last season. It’ll happen next season. The problem I have with refs isn’t that they don’t make all the calls for my team – which is something I write over and over – it’s that they are inconsistent against us more often than not. In this game, for example Zanetti was given a caution for a tackle that was technically a yellow card offense – but Jonathan was not given a penalty for what was technically a foul in the area. If the ref doesn’t want to give the penalty for Jonathan, fine that’s his decision. But it’s considered fair that he makes that call both ways. Zanetti’s tackle isn’t usually whistled as a foul – let alone a caution. His cleats were up, but he wasn’t head on and he touched the ball – which are usually considered mitigating factors. The ref is either very poor or he was minus his testicles with a loud crowd because he called a game that had one team get twice as many free kicks as the other, in this case 20-10. I will also bet heavily that there isn’t any referral of that defender for intentionally cheating, as there was none for Robinho last season when he did the same, albeit as an attacker. If I were Gilardino, I would be very pissed that I would have had to have served that suspension a couple of seasons ago, considering.

I noticed that Nagatomo was whistled everytime he touched the ball. It has nothing to do with the game, but it’s ugly, so it’s here.

Last but not least in the ugly pile is the fact that Lele Oriali is still not with the club. Lele, a WC winners medal recipient, was let go by the club during the Benitez debacle. About 10 years ago Lele was convicted of and almost sent to the equivalent of federal prison for official document (passport) forging. He was heavily fined on appeal and banned from the sport for several months. This summer, the real person responsible for this incident has come forward publicly and said that Lele wasn’t responsible. That Lele took the punishment – as an innocent man – and came back to the club to help it to unprecedented heights is a loyalty that should be rewarded. I hope he makes it back here.

My Inter player of the game is Diego Milito for putting 2 in the net and showing promise for this season. Diego had a herd time of it last season, but I hope that he can turn it around this season. 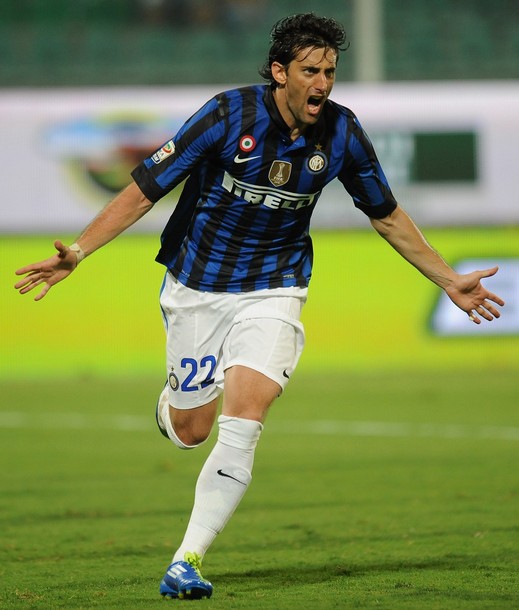