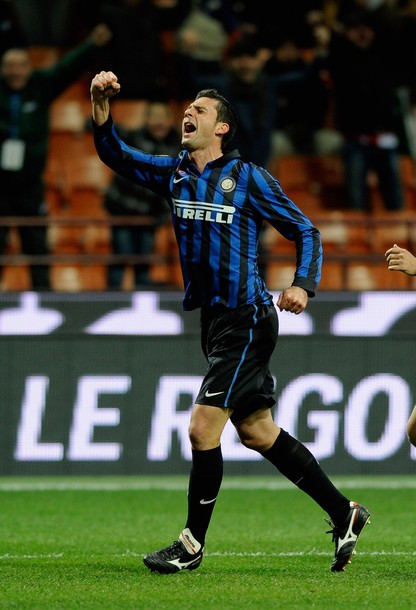 There are a few issues that incorporate the team, this game and the transfer market this winter, so let’s get right down to it.

Does this seem like a high score to you? Here’s my take on this… Cesar kept concentration on the game at 4-0 to turn away a real strike on net that could have just as easily been a goal. Assuming I am not reading too much into this, he really wanted the clean sheet. Pride may be a deadly sin but it’s absolutely a necessity for an athlete. Welcome back, Cesar.

I wasn’t thrilled with the defensive effort on Saturday. Lucio seemed to wander off center too easily and Naga had issues in the back early. Maicon was very decent and Walter Samuel’s floor performance-wise isn’t very low, thankfully. Naga looks like he needs to ramp up to speed slowly after long breaks from the field because he definitely looked better as the game wore on. As iffy as he was in the back, his midfield and forward play were still good, though.

Lucio looked a little lost at times. He let Giovinco get a header in the area, for gosh sakes. Giovinco, I mean come on! By my count, including the chance mentioned above in the Cesar section, the defense had 3 breakdowns that looked more like Defensive mistakes than good Parma chances. Don’t get me wrong, Inter are more organized back there than they have been in a year at least, but more can be done.

If there is a position on this team that benefitted from Ranieri taking over it’s the midfield. Between Gasperini, Leo and Benitez the midfield has been trained to stretch itself out both horizontally and vertically. Consequently, over the last year plus it never looked like it was in position to do much. But a back to the basics approach has really bolstered this group. They cover each other and the defense better – I saw Alvarez covering for Nagatomo at left fullback deep! One goes forward, one stays back. That’s the way it should work. Otherwise we might as well be talking English football here where everyone just runs wherever without consideration to tactics.

Even more impressive is that the midfield seemed eager to flip positions. At times Alvarez drifted wide-ish left and the midfield looked a flat 4, as in the first goal. At other times he roamed the hole between the midfield and the attack and played merry havoc with Parma’s defense. Cambiasso and Motta were very good in middle support and Zanetti continued to alternatively cover for Maicon or make runs on his own. It was a master class in midfield tactics and I only hope we didn’t peak too soon.

Milito and Pazzini combined for 3 scores and an assist – none of which were penalties, I might add. It’s a good day. It there was a position on the field that I think we need immediate help it’s here. Milito and Pazzini can be very useful. Forlan can’t seem to stay healthy, Zarate is proving wasteful and Castaignos isn’t getting chances to play. That leaves us 2 guys who can really contribute. That isn’t enough. Today I have no issues with these guys and I am as happy as anything to have them. This time next week… well, we’ll see won’t we.

By the way, the score for this bunch would have been a 10 if Pazzini didn't sky from 10 meters out.

Once again Inter had a formation shift. On Saturday the team - appeared to me, anyway – seemed to embrace the idea of a playmaker again. Alvarez looked to be the main catalyst for the attacking element of the team early on. And when the opponent started to account for him it opened up spaces for Milito and Pazzini in the middle.

This seems to me to be important for a couple of reasons. One, it means that Alvarez is getting a lot more trust from the coaching staff to start the game against any Serie A opponent. Two, it means that Ranieri has been spending practice time on the 4312 – the formation that we use to incorporate Sneijder. Assuming any of this provides any insight into his mind, Ranieri appears to be focusing on getting the team ready for Wes’s return. Playing a 4312 in anticipation for the derby and maybe beyond should put any Wes to England rumors away unless a completely insane offer comes in.

On a different level it was very satisfying to see the team perform to it’s level and not the level of the opponent.

On a completely different level than that… Before the game on Saturday I wrote this comment upon learning the lineups:

With the exception of Castellazzi everyone on Inter's bench for this game is 24 years old or younger.
Excepting Zarate and Castellazzi every one of them is a very possible future mainstay.
Excepting Ranocchia and Zarate I don't think any of them earn more than a million Euros per season - and that million per would be Castellazzi.

There was a reply to it but it didn’t really seem to understand what I was saying and it’s a fairly important point for this team, this season. So I am going to explain what I meant and why I think it’s a big deal. 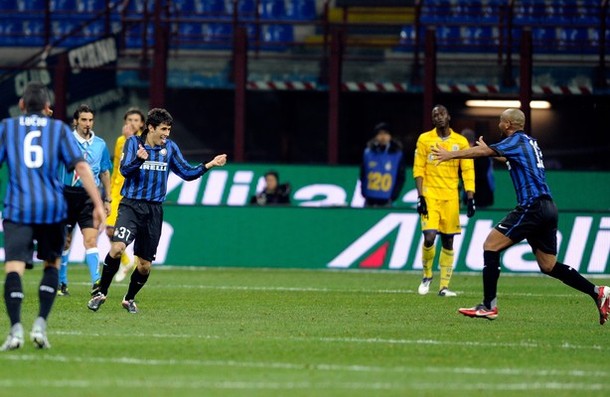 The team, as we all know, is in a reorg of its financial paradigm. And part of that reorg is that money can no longer be shipped out for bench players. That means that if the team is going to spend real money on a player's salary, that player better be out in the field on a regular basis – for example, the opposite of Sully Muntari. Even Ranocchia making his 2 million per year is acceptable to me since he plays a lot of the time. And Zarate is so definitely going to be shipped back to Lazio that I don’t even care how much he makes at this point.

Also, the bench crew is at the point where spot duty is a stepping stone to bigger and better things. A player like Poli will eventually get more playing time and might get better. And he’s still good enough now to be a contributor on the field. It just makes so much more sense to have a player like him on the bench than when Inter were relying on a player like Patrick Vieira, with apologies to Patty’s fans. Patrick cost the team a fortune, was only going to decline in value and there was no future for him on the team – Inter was only counting time until he deteriorated to the point where he wasn’t even worth putting on the field.

Having the young guys on the bench who can play AND get better such better value for the money spent it's not even funny. It just seems like we are just now figuring out smart football business, it's just such a shame.

Speaking of spending money, a moment on the Tevez situation is probably warranted. I love what Branca is doing right now and I think it can only be a win – win for us. Here’s what I mean, let’s assume that Branca doesn’t get Tevez. That means that Milan went from getting the use of Tevez for nothing other than his salary – 9-ish million for a year to having to pay that salary plus 30 million in transfer fee. That amount that would be incredibly painful for Milan since they don’t really have excess money this season following a very large summer transfer payout. Tevez makes the immediate future of finances in Milan very uncomfortable.

If Inter get Tevez, they get a huge discount on the amount that Man City quoted them this past summer, I think it was in the 50 million range, they get a game changing forward to replace Eto’o and they get to frustrate their across city rivals. Is Tevez worth the frustration that we all kind of know he’s going to cause on the team? Well, he doesn’t really seem to be hurting Man City right now, is he? I mean has Man City ever been this high on the table and this is with the “distraction” of Tevez… and Mario Balotelli, I might add. My point here? As big a pain as Tevez can be, no one person is bigger that the team. Plus, I would also suggest that Inter has better leadership to handle the nutjob than Man City.

Financially, Inter are also in a great position for this. The team spent almost nothing from the €25-ish million gotten from the Eto’o deal and the salary structure only gets better after Chivu, Cordoba and Muntari are off the books and Walter Samuel re-signs for a lot less this coming summer. So whether the team gets Tevez or not, I am confident that the near future is going to fine financially. If we have the old Milito back and can get time to Castaignos... then I am not worried about the immediate future of the forwards either.

It’s got to be Milito who found new form and confidence since Ranieri took over and stuck with Milito through thick and thin this year. Milito getting his form back can only be good things for us now as he can be a prolific little bastard when he wants to be. My problem is everyone losing their collective minds and giving him another contract extension. Plus, we will see how he does against Milan. If he can bring it against a good team in a derby all will be forgiven. 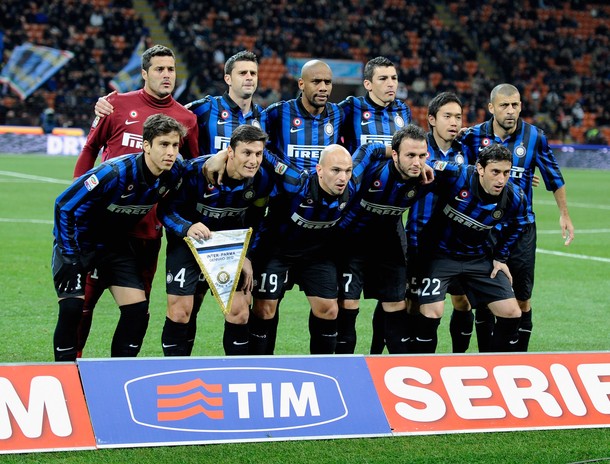