Inter continue their Europa League campaign on a positive note by winning Thursday 1-0 against Partizan to make them joint first place in their group with 7 points.

Palacio's 87 minute goal sealed the game as Inter continued their European Tour. It was well taken and well set up by Milito and Guarin but the real hero of the game might have been Handanovic who saved a breakaway shot mere seconds earlier.

Once again Inter had the upper hand early and failed to seal the early goal that might have deflated the visitors for the rest of the game had Coutinho put away a marvelous combination that ended with him open in the area to the left of goal with time and space. Such a perfect confluence of events only yielded a volley put wide and some insecurity in ensuing attempts.

The end result was a midfield battle, an injury from a crunching tackle and at least two near misses for our heroes. And frankly, it didn't bother me a bit. Here's why: we were able to rotate the squad, play some young guys more and enter the league Matchday (9) on Sunday with enough people getting rest so that we won't be fielding a sub par/tired team against Bologna.

That's the good news. The bad news is that Coutinho suffered a stress fracture on the crunching tackle that he probably could have avoided by shooting earlier. At the very least he could have touched the ball sooner and gotten a penalty out of the pain. But the important thing to me is that Strama has shown to be very cautious when it comes to injuries. Coutinho will be back when he's better, he won't be rushed and he'll still have a place in the squad when he does come back.

Also in the bad news column is Cambiasso who apparently picked up a knock as well. It appear to be serious, only a soft tissue discomfort, but time will tell if he has to miss any game time. Cambiasso is playing well this season and it would be a pity to miss him.

At this stage in the Europa League I am not going to eat the team's lunch over a ho-hum attitude at this stage of the tournament. I mean, as long as they qualify and frankly I don't see how they don't at this point.

For the record here's the group stage:

With 3 games left Inter only really need 2 more points to qualify and it will be yet another interesting choice for Strama to make if he's going to try to win the group. Will such an action risk Serie A play? Maybe he's trying to build a mentality amongst the team? Whatever he chooses, I think it's fair to say that his choice will be heavily criticized. Strama, after being he only coach of an Italian team actually win a European game this midweek had to face some tough questions about the game and the close score.

Intellectual prostitution, anyone? Meanwhile I'll be interested in what odds are given that all Italian teams pass through the Europa League this season...

It will be with a great deal of justice that Inter supporters praise Palacio, Coutinho, Handanovic and others for their game on Thursday. But I will be praising Juan who I thought played a good game and will probably be on the field against Bologna. Juan has been absolutely solid this season and performing well above expectations considering what people, people like Tim Vickery who I have nothing but respect for, were saying about him after the Olympics.

Is the report all rosy for those who battled on Thursday? No, Jonathan looked particularly poor, but what can you do? Naga was sick, Javier needs rest... who else is there to play? So Strama took his chances and rolled with Jonathan. Despite the poor performance, Inter didn't crap out. So we live to roll the dice again. Lucky us, so far. 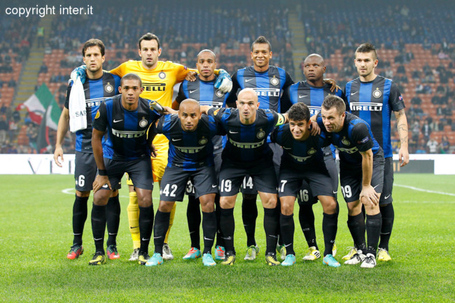