The game yesterday was perhaps the best showing by The New Inter Project. Despite coming late out of the sprinter's stance at the front of each half, Inter built two very decent halves of football - the second more so than the first - against a team that was desperate to stop a 3rd loss in 4 games.

In the downpour yesterday we saw a gritty, physical Inter hit on all three phases of the game and outplay it's opponent in both halves for perhaps the first time this season.

What's been making it's way around the blogosphere is that Inter will only get better from here.

And I think that's where we fans get it all wrong. There is no certainty to the future. There is every chance that Inter will suffer some setbacks. In fact, if I had the means or opportunity I would bet the kid's college education that at some point this season the critics will use the word "crisis" for this team that they are now unrealistically praising.

So let's get a dose of reality here. This team won't battle for the title - it might come in 2nd but it won't be a battle against whomever is 1st, if you see what I mean. Not as it is now. This team will struggle against the Napolis and Juventuses (Juventi?) and the Lazios of this world. Not that Inter can't compete with these teams but that too many variables would have to go just right for there to be a certain victory. This team isn't hasn't come together to that degree yet, in my opinion. It doesn't have the talent on paper yet, either.

But that cold shower notwithstanding, it was a glorious game for the Inter supporter. Strama continues to use his bench to it's fullest capabilities. And really, I don't have any argument with any part of his personnel selection. For this game, he foresaw it exactly as it panned out. It was a slugfest that took place at a sprinter's pace, in the first half.

In the second half everyone in the world knew that Bologna would slow waaaaaaaaaaay down and Inter took advantage of that to put 2 in the net. And what beauties they were. Palacio has been showing that a lot of people were wrong about what kind of contribution he could make to this team, me included. I mean, I thought he would be a solid contributor, but he really works well with the other short guys we have up front.

And I have to mention the contributions of Cuchu and Zanetti. Last season I was begging on bended knee that someone would give these guys a rest every so often. Strama has done just that, during the Europa League games, and look at how wonderful they are playing. It's a joy to see them playing like this again.

I also want to mention how glad I am that Batmanovic, Froggy, Cassano and Palacio and Juan are on this club. Right now, all these guys deserve a lot of the credit not just for this game but for this opening salvo of 9 games. 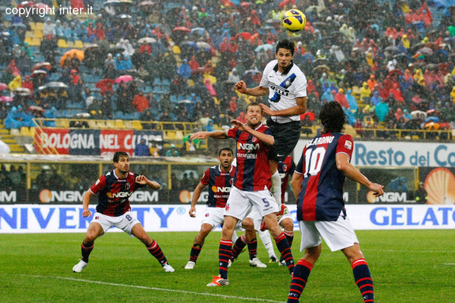 But I do have some criticisms. First of all I would like to see more of Pereira. I don't really know what we have in him. And I don't think Strama does either. I mean I can list all his attributes, but I can't tell you what value he is to the collective. I know that some of you out there have made up your mind about him, but I haven't yet. I don't think he's shown his best yet. Plus, I am worried about Walter Samuel. I think that he should be rested more in favor of Silvestre or Chivu, if he's fit enough. I am not the biggest fan of either but I can tolerate Chivu in small doses and I am still patient on Silvestre - he hasn't pissed me off yet. By the same token, he hasn't won me over yet either. So, hmm, I just don't know about him yet, and almost ten games in, I should have some idea, yeah? Does that mean that there isn't a whole lot to know, or that Strama hasn't been as diligent about getting him game time?

There is a Hurricane type thing happening outside my window and I have already spent far too much time out there in it getting soaked to the toe nails when one considers offspring and servile, canine quadriped obligations. So before the power goes out on me, I am going to spend a little time on the shareholders meeting I have been waiting to end.

Inter finances up to June 30th, 2012 (the 2011-2012 season) are thus: €77 mil in the red (down from €88 mil last season). Earnings are down from €269 million to €236 million. Wages are down from €190 mil to €160 mil. The plus side is that all the work that was done to revamp the team's finances go on next years Financial report. Unfortunately so does the lack of Champions League income. Considering the drop in losses from last season to this season and the promise of another drop next year, the FFP police ought to be happy that everything is moving in the right direction.

And so far, compared to last season's problems both on the field and in the ledger, right now I am a reasonably happy camper myself regarding our current situation. 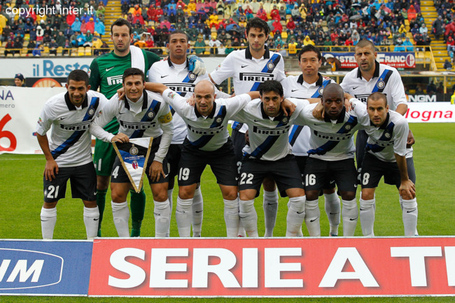