Neftçi PFK v Inter Milano: Going to the Baku of Beyond

Inter travel to Baku, Azerbaijan, on the shores of the Caspian Sea, to take on Neftçi PFK in matchday two of the UEFA Europa League, Group H. They held Partizan to a 0-0 draw last matchday, while Inter finished 2-2 against Rubin Kazan so the group is all even steven at 1-point apiece. With the long trip to Azerbaijan and the derby coming up this weekend, it may be difficult for the Inter to really give this game their full concentration. As for Neftçi, this will be their first ever group stage home game. Really, anything could happen (but I am sure we will totally win).

Share All sharing options for: Neftçi PFK v Inter Milano: Going to the Baku of Beyond

How to Watch: Live on Fox Soccer Plus & Fox Soccer 2Go. Check here for channels outside the US. You can catch a replay on ESPN Deportes later on Thursday. If those dont work, try a stream: Wiziwig, First Row.

Liveblog: You betcha! Kirby may be busy but this is early enough here in Seattle that I will run it if Kirby cant. Join me here 15 minutes before kick-off and we will liveblog our pants off! 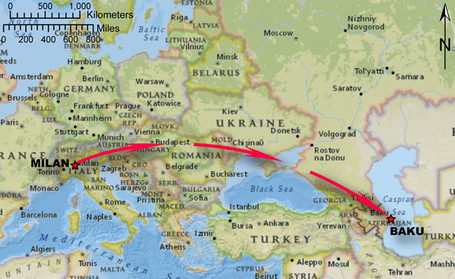 Let me begin by saying that I had no clue where Baku was before Inter was drawn into the same group as Neftchi (the acceptable spelling that doesn't have the fancy punctuation). And looking at the map now, I question whether Azerbaijan should really be considered part of Europe at all. Sure, this area was a part of the the Soviet Union and typically Russia is considered Europe, but come on, this place is east of Turkey and practically Iran. It is the Middle East. But hey, UEFA says differently so there you go. Anyway, Baku is about 2060 miles from Milan (3325km for you metric types) and the club has had to charter an airplane to get there. I guess that way travel time is greatly reduced (no layovers) and there is lots of room for the players to sleep on the way home.

This game will be charting new territory for all concerned as it is the first time that clubs from Italy and Azerbaijan have met in any UEFA competition. According to UEFA, Italy and Azerbaijan have met several times on the national level, including the U16 and U21 squads, and Azerbaijan has never beaten Italy. The closest they came was a 0-0 draw in 1997 between U16 teams. The Azzurri (senior squad) have only played them twice, both as part of EURO 2004 qualifying: Italy won both games (0-2 in Baku and 4-0 in Italy). But that doesn't mean this game is a gimmie for Inter.

Neftchi is unbeaten at home in 14 European home games, including five draws and nine wins. Not bad. Plus, they are the first ever Azerbaijani team to make the group stages of any UEFA club competition and they are the most successful club in Azerbaijan history. They sit 8th on the table in their home league, but then, they have only played four games while most of the other 11 teams have played seven (I guess they do things differently over there).

Basic stats from this year:

So, generally, they score more than they allow, but just barely. As I said before, they are doing well at home and have yet to lose there this year in any league (3 wins, 2 draws). This will not be a cakewalk.

Neftchi played a 4-4-1-1 against Partizan, with what appear to be most of their regular starters (at least, almost all of them have played every game this season). They played a largely defensive game (I think the term "park the bus" accurately describes it), making only seven attempts at goal, only one of which was on target. Still, they had six corners in so they must have gotten forward at least that often. This was their first ever group stage game so they may have been testing the waters a bit. I have no idea if this is their usual style of play (ie, hold back and wait to score on the counter) or something they pulled out special for their first away group game. I guess we will see on Thursday.

Oh, and Neftchi play in black and white vertical stripes... Not our favorite color combination when it comes to football teams.

Fun Fact: According to Wikipedia, the Tofiq Bahramov Stadium was built by German prisoners of war in 1951 and it's shape honors Stalin. Sounds like a cheery place. Yikes.

Strama has brought a strange mish-mash of players to Azerbaijan:

It looks like he is resting many key players before the Derby this weekend. I guess that the whole point of having a roster of 28 or so players is so that you can do a bit of turnover. Strama pointed out in his presser today that the Milito, Cassano, Zanetti, and Samuel had played five games in 10 days so they needed a bit of time off. As it happens, they are also four of our older players. Coincidence? I guess the older guys may get worn out faster. This squad has an average age of 24.35, including five players under the age of 20. Terrani is only 17 for cripes sake. He would still be in high school here in the US. Plus, leaving Zanetti at home worries me a great deal. He has the ability to take a flailing, lack-luster squad and literally drag them up the field by the scruff of their necks. I worry that without him, the heart will be sucked out of the squad.

Fun Fact: Inter have 498 goals in all UEFA competitions. Only two more to 500!

As for formations and those of you trying to tease out information so that you can win the coveted title of Grand Imperial Poobah of All Things Inter (and a certificate to prove it), Strama was... well, noncommittal. He reiterated that, given the players at his disposal, and especially the great number of central defenders, that a 3-man defense best allowed them to shine. But before you all go adding that to your prediction, he also said that tomorrow he could change things up a bit. That last bit could just be talk to keep the enemy on their toes, but he could also have something else in mind. Really, who can say. The man is an enigma. He also, quite astutely, pointed out that tomorrow was the first real test of Inter's squad depth. I am getting a distinct sink or swim vibe from him, like tomorrow is the day for some of the lesser used players to show their worth.

I think we can probably count on Coutinho and Livaja starting tomorrow, and Handanovic in goal, but the rest... Well... I have totally given up with trying to suss out our fearless leader but the fact that he brought Ranocchia to the presser makes me think Froggy will get a start as well. And then there is Cambiasso. If he doesn't play, who would be captain? So maybe he starts... but that one I am less sure of and that is as far as I will go. Just speculation. I know when I am beat. But I hope that won't stop all of you from trying. The certificate is quite impressive and you will be the envy of all who see it. What could be better?

Alrighty. I will be honest again here. I am a bit worried. I am frightened that this is just too big of an ask from Strama and a squad largely composed of people who have only known each other for three months. They will be far from home and playing against a team who are looking at this as the "the biggest match of the 21st century." Neftchi coach, Boyukagha Hajiyev went on to say that his squad is looking to make history against Inter. To say they are motivated is an understatement.

Ranocchia goes some way to ease my fears. He said today that he and squad are completely focused on the match ahead:

"Honestly I'm not thinking about the derby, I had forgotten that it was Sunday... And we shouldn't be thinking about it as we have important commitments, one tomorrow in fact, and we absolutely must win the game against Neftchi. This is the only thing we're thinking about."

That kid sure seems like he has a good head on his shoulders. Or at least he always seems to be saying the right thing to the press (no mean feat when it comes to football players). I hope that he is right and the children Strama is throwing at the Azeri will have what it takes to get the job done because crapping out of the Europa League would be crushing. I would very much like to believe that Inter has finally turned a corner and we can put the horrors of the last two years behind us. A victory tomorrow (and Sunday, of course) would show Italy and the rest of Europe that while we may have been down, Inter is not out.

So, lets all try to keep a positive attitude because we haven't lost yet. And hey, this team may just step up to Strama's challenge. We could actually kick some ass tomorrow. Yea! (insert non-ironic fist pump here)

Looks like the team made it to Azerbaijan safe and sound. Whew.