Inter traveled outside of Europe to Azerbaijan to play in the increasingly misnamed Europa League game with Neftchi Baku. The game finished 1-3 in favor of the Nerazurri, but the second title to this review could be "Job Done, Whew". For such a simple game, there were a lot of potential complications not just because this was a game where Inter could not afford to make any mistakes, but because of the glut and quality of the games surrounding it.

This was a game of Inter versus what should be European minnows, all due respect to Neftchi, but there was a lot of subtext to this game. The matches have been coming hard and fast for the group from Inter lately and the punctuation mark is the Derby, always an important game, on Sunday. The problem is that the schedule congestion included this important little romp halfway across the world only a few days before this probably more meaningful match.

Honestly, if Moratti were another type of owner, on the day the schedules were announced there would have been a fat man angrily speeding away from the Saras offices on a hair dryer with wheels.

Moped or no, the problem remained, how to deal with this match, made more important thanks to the draw against Rubin. The solution that Strama came up with was to leave half the team, almost exclusively the regular players who are over 30, at home in Milano and breakout some of the babies fresh from their blister packs.

Now, I have suggested in other game reviews in the past that Inter coaches have fielded lesser teams, or told their teams not to risk too much or expend too much effort in a European match due to ensuing Serie A league and Champions League games. And despite being 100% correct in my assessment of the situation as verified by the outcomes, the coach's own admission and players' descriptions of those events in question, I had been roundly criticized - mostly by fans of other Italian teams, I'll let you figure out the most likely suspects - for these suggestions. So I have learned that no matter how truthful a statement I may make regarding this situation I will NOT suggest that a lesser team was fielded, or that reminders of the important event on Sunday were given at any time in this game by Strama so that the team wouldn't risk injury once the game was in hand.

I will suggest that Strama was able to accomplish several goals:

1. Strama was able to rotate the squad. As stated, I will not suggest that this rotation of the squad was in any way inferior to the normal squad that Inter usually use. But, it was nice to see Mudingayi and Joel Obi take to the field again, even more so when the latter scored a wonderful one touch goal. It was also great to see how many quality youngsters Inter can field. I would like to reiterate my point and say that I am not suggesting that this is in any way a lesser fielded team despite Strama using Primavera players or recently recovered players who haven't seen the inside of a stadium in 5 months.

2. Strama was able to use this game to reinforce his message to the team. Inter attacked the edges of Neftchi's defenses successfully. Inter used the midfield as the first line of it's defenses, And until Coutinho ran out of gas again, Inter tried to press the Neftchi defenders when they had the ball. Personally I think that the team is growing in confidence in Strama when they see that his system is providing the framework for wins with the regular first team and the... just as good but younger and recovering from injury team.

3. Strama was able to diffuse some pressure surrounding the team. Before the season, there was pressure of having an unproven, younger coach who didn't exactly travel the accepted route of coaches to one of the big teams of Italy, and we all know how important the "accepted" is in Italy. Then there was the pressure of poor showings against Europa League teams at home, even if all of those ties were basically already decided. Then there was the pressure of losing at home to Siena. Then there was the pressure of winning against Chievo, but people didn't think it was stylish enough, or something. Now there is a home win against a credible opponent, a decisive Europa League win, and improvement in the table from last season. There is some breathing room here for the team. The Derby is a bit of a blessing because of the chaotic nature of it - anyone can win it no matter the league standing. Milan are favored and if Inter put in a decent showing I think that the pressure will still be off Strama and the team going into the international break.

4. Silvestre, Obi, Coutinho and Livaja gained confidence. Silvestre hasn't had the best of transitions, which is something that I and others warned about at his transfer to Inter. He usually takes a while to settle in. But the goal yesterday didn't occur on his side and he wasn't solely at fault for it as Cambiasso, Handanovic and Juan all had a chance to make a play but none of them did. Obi looked like the Obi of last season bombing away up and down until he looked ready to pass out at 60 minutes in. Coutinho looked very good in the only half that he really played in. His skill and ability are a thing of beauty to watch... but he needs to get that work in. Livaja looked very good up top as well. It could very well be that he's very suited to this style of play, as the lone guy up top. Plus, I like that he can take a long pass and hold it up, something unique to our current crop of forwards.

5. It must be reaffirming, on some level, to the organization that they were able, under heavy criticism and denouncing in the press, to engage in their new direction so openly - I mean, lets face it, as hard core supporters we should know that Inter has been in voluntary cost cutting for at least 2 seasons now but this summer was a huge public step in that direction - and show everyone that the team is doing relatively fine as a result two months in. Last season was disastrous and that disastrous-ness happened mostly here in the opening parts of the season when the expectations were so absurdly high despite the warning signs. This season can go either way still, but at least now there are signs of life and hope for the immediate and longish term future.

So as I say, job... or rather jobs done and now we can move on to the Derby and take a brief rest for an International break after which we start again a string of matches at an absolutely manic pace that includes 4 matches in the 10 days between Oct 21 and Oct 31 (Catania, Partizan, Bologna, Samp) and 3 matches in the 11 days after that (Juventus, Partizan, Atalanta).

Are we having fun yet? 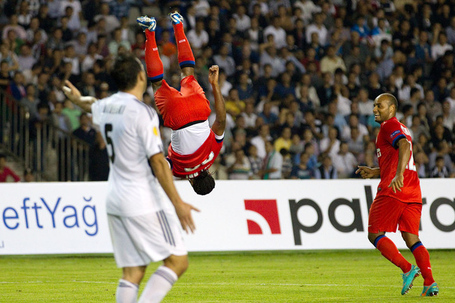