The Inter Babies – average age of the team on the field at the starting whistle: >22 – took on hosts Rubin Kazan in the penultimate group stage game of the Europa League and lost 3-0 but it was in many ways a success.

No, this isn’t an attempt to spin a loss into some kind of moral victory – mostly because I am not sure that moral victories exist. This game was a loss on the field and it was a loss of opportunity to get a weaker opponent in the next round. Full stop. It was a lost opportunity in this case. There, I said it twice so that there can be no mistake about it.

But, this season has another meaning, no matter how lost it may become in the press or the day to day rollercoaster ride that is football fandom. And like the A Charlie Brown Christmas with the "true meaning" of Christmas, I will continue to harp on the "true meaning" of this team’s season: (1) win as much as possible including a Champions League spot (2) renew, rejuvenate and review:

Renew: To incorporate new, younger players into the squad.

Rejuvenate: To ease the burden of playing time on the older players so that they can contribute more in the time they are actually playing.

Review: To play and then evaluate those younger players so the team can plan intelligently for the future.

This game reminded me, and I think I mentioned it in the LiveBlog, of Rafa’s poor attempt at Werder . There were two choices here: play the best 11 including the senators for first place before the big trip to the or rest the big boys and give the youngsters some European experience. Rafa’s actual plan was bizarre. In a move guaranteed to fail, he decided to play the oldest of the old players – Orlandoni, , Zanetti – with the youngest of the young – Biraghi, Nwankwo, Santon – and the craziest of the crazy – Sully Muntari - right before the team left for a long trip to play in the Club World Cup. It didn’t go over well, we lost 3-0 and first place, the youngsters got nothing out of the experience since the older guys were doing all the heavy lifting and when one watches this game it shows that no one had any idea what the plan was as people were literally stumbling over each other.

The reason I was reminded of that game was because we are entering the same part of the season as the above, there are important games on the horizon and the choices for this game are the same: Play the best 11 and go for the win and first place, or rest the senators and see if there is anyone who can stand out and be useful before the Jan transfer decisions are made.

Unlike Rafa, Strama would make a choice and then live with it. He played the babies for the entire first half and subbed out the 2 least effective for seniors. At this point the youngsters still had to do all the work for the game but they got some guidance and had a chance for a goal to reward their efforts. Plus, and this is a place where Rafa failed miserably, in the press conference afterward Strama rewarded them and thanked them for their efforts. Everyone knew that the choice to play the youngsters would lose the game, but Strama made a conscience effort to reward those players for what they did well to encourage that behavior – hard work – he wanted repeated.

It’s called "teaching" folks and if the plan is to bring up the youngsters into the senior squad then this is very necessary. It’s also encouraging to me. It means that The Plan is still in effect and the team hasn’t decided to restart (again) or abandon it.

But, let’s move on to the nitty gritty of the game, shall we?

So, as one might expect, the first half was spotty, to say the least. The goal in the first half came inside the first minute and was a combination of poor defending and bad luck.

Jonathan was beaten like an egg to the end line in the area where the ball was crossed low right in front of the goal mouth. To his credit, JJ was the first player there aggressively rushing to back up his countryman at far post. Accurately sensing that turning to his left and blasting the ball up field in front of the goal mouth would probably result in a ricochet right back into the goal, he turned to his right towards the end line on the other side of the goal.

I am purposefully describing this goal in this way because poor JJ really did everything that suggests he had an awareness of the situation and thought his actions through correctly. I like the player that he’s turning into and I think that, trite as it sounds at times, he’ll get better – if he keeps his head. He’s got the body, the athleticism and as I just described he’s developing the brains.

Unfortunately for him, when he turned to his right he tried to blast the ball out for a corner but somehow found the post. The ball came back – as the laws of physics require – with equal force as his kick and right to a Rubin player in front of the goal mouth.

It was a disappointing turn of events on many levels, to paraphrase Steve Martin’s disappointing Christmas in My Blue Heaven. On the one hand, it’s disappointing to have a player like Jonathan on the team who does so much wrong. On another, JJ did so much right when he played the ball that he really didn’t deserve to have that happen to him.

The rest of the first half was an up and down midfield battle. They didn’t get another shot on goal and we, although we got a couple of corners, didn’t really threaten much more since all of our shots (both of them) weren’t on target.

Heroes for the first half include Ranocchia, Pereira, JJ and Benassi.

Goats include Jonathan – as expected, Belec – who didn’t exactly own the penalty area on that first goal especially as the low cross flashed right across his position, Livaja – who despite looking so good in previous Europa League games looked very poor yesterday, and Romano – who I was eager to see but admitted afterward that his inclusion into the game scared the crap out of him.

The second half saw Javier and Palacio for Livaja and Romano. At the time I thought it was the right decision to make as the team responded immediately. Up front they had someone who was fighting for the passes that made it to the front ranks and in Javier there was stability to the wide right defensive position and someone other than Romano who would make an aggressive direct move – pass or dribble – up the field. Romano had tried to drop these long diagonal passes all over the place and all he really succeeded in doing was creating 50-50 chances in the Rubin half of the field. At some point in the future he’s going to have to make safer passes that help increase chances of possession, not decrease them. Zanetti was actually taking the ball up the right side of the field himself when he had a chance to. It was much more conducive to possession and useful play on that side than dropping lobs or inaccurate long passes.

Anyway, there were many more chances to play in front of the Rubin goal. Coutinho and Palacio both had chances to flash a shot at one point or another, mostly coming from the left and moving to the right to create some space and a lane to shoot through. Coutinho looked rusty, as thought he hadn’t played enough recently to consistently dribble opponents or make passes in game type scenarios – that is, running at full speed with multiple people trying to take you out from every direction. But by and large Inter owned this half. Coutinho, Gargano and Palacio all had shots that were either a close miss, an open shot that the player normally does better with, barely saved and hit the upright. The point here being that several chances were made despite the young age and relative inexperience of the players. Plus, no one was giving up, young or older.

The end came when Ranocchia was tackled somewhat viciously and a short time later asked to be subbed when he felt a twinge in what looked like the back of his leg – no word yet as of this writing how he’s feeling. His replacement is a Primavera player called Isaac Donkor who is around 17 years old if I did the math right. Isaac was promptly beaten on a long pass – all the Inter websites are calling it offside, but considering the final score it really doesn’t matter at this point – in which he was frankly muscled out of the way – this is a much bigger deal to me, an Inter quality defender should be strong enough to hold up, although I will give allowances for his teeny tiny age - and Belec was beaten near post (literally; the ball bounced off the post and into the net) for the doubling. The last goal came in injury time as a Rubin player with the ball came down the left sideline and cut inside taking 2 defenders with him leaving a late arriving fullback alone on the left side line. The ball found the left alone player and he crossed it low and accurate to a player in the middle who made no mistake with the sitter having out positioned Silvestre who will be sure to receive a media shellacking for the meaningless goal.

After the game Strama made sure to describe how the younger guys made Rubin uncomfortable for the 85 minutes that the Russian team wasn’t scoring as well as all the missed opportunities that the club could have scored on. It was a masterful move that reassured the youngsters that they wouldn’t be taken to task on the score but rewarded for the good work they did. The young players interviewed all responded with an eagerness to work harder from the words of their coach and ready to do better given another chance – as Strama virtually guaranteed with his end of game presser. It’s wonderful what a positive attitude and a safe environment can do for a learner.

So while it wasn't a moral victory… or an actual victory, it was the next best thing: a worthwhile learning opportunity that offered real growth, support and motivation for the future. And on that theme: The Primavera team is third in it's standings this season just 8 points off the pace with a game in hand. It looks like despite huge turnover that same Primavera team is in 2nd place in it's Next Gen group, 2 points off the leaders with 2 games left to play, in it's title defending year. 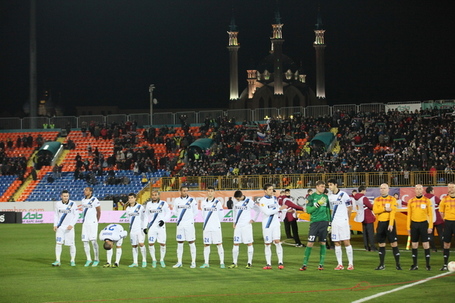 DON'T FORGET TO CHECK OUT THE FANPOSTS!