Inter lose an opportunity away to Parma to gain a point or three on the league leaders and stop the slide that started with the trip to Atalanta on November 11.

That the opportunity was lost is unfortunate, but what’s perhaps more unfortunate is the manner in which the game was played. It seemed a lackluster performance on many levels. That there continues to be an injury situation is a concern but I think that there is also a worry that Strama might be focusing the roster too much.

Last weekend the caution bans added to the injury table in limiting the veteran midfielders available for Strama to choose from. Strama was forced to use players that haven’t seen the competitive field in quite some time. This is of course his fault for not preparing this eventuality in the first place. It’s very possible that expectation of the front office, media and fans "forced" his hand in going for the gold in every possible game instead of offering playing time to the unproven players. I am personally irritated by the lack of advances in this manner at this point. There shouldn’t have been any problems in this regard. Considering the number of players on the roster and the number of games that Inter have played, there should have been time for young players to have some time on the field.

Branca also deserves some blame for not providing the correct number or type of players. But I don’t think I really have to convince anyone that he deserves a certain amount of criticism these past few years in player replacement. There is also the somewhat understandable/somewhat personally unpleasant deal going on with Sneijder. I don’t think that anyone disputes the need to cut his salary or eliminate it all together in the new financial paradigm. There is also a PR problem with having to get rid of a popular and high profile player that Inter is trying to offset by making the "contract renewal" and subsequent dispute public. It has been argued that this is causing unrest among the players but I am not so sure that’s the case. This dispute has been actually happening quite a while before it became public and the team was winning then. But I think I will concede that it certainly isn’t helping matters now.

Circling back to the game, there were some good moments in the loss. But there were bad and ugly moments as well. It’s better to take each in its own group.

There was only one thing that was ugly in this game but it was a biggie. It goes something like this – Inter was unable to take the game to by controlling the ball or the field.

I have been reading, recently, all sorts of nonsense about Strama not being able to adjust his team to make it less reactive and more able to control the action. It’s nonsense because I don’t think that given the type of talent of the team he can do a whole hell of a lot to control the time, possession or the action. Would putting Coutinho and Alvarez on the field at the same time help this out? With Alvarez’s lack of time on the field to gain form I don’t think that would have helped the team for this game.

Assuming that Sneijder is sold and money is freed up, I don’t see any way for this to get fixed for this season. There are several young players that have been added to the Primavera team to fix this situation in the future. I don’t think that Bessa now practicing with the team is going to make a whit of difference in this regard.

There was some bad here. There is a lot of blame being handed down to Ricky Alvarez and he wasn’t particularly good. I thought he was okay at the start of the game and for the next few minutes but it fell apart after that and frankly he could have been subbed off a lot sooner than he was. This doesn’t mean that I don’t have faith in him – I still think he’s a good player – but he needs playing time to play well – just like everyone else - and he hadn’t gotten it in preparation for that game.

Zanetti had a bad game and considering the way that plays – with speed on the wings – he probably wasn’t the best choice. Strama has a mental block about playing Naga and on the wings at the same time and that might have been a better personnel option. Zanetti’s positioning sense just wasn’t as important as his non-ability to keep up on the wings.

The forwards had a few chances to score but those chances were left wanting. Milito and Palacio just didn’t look like there was anything in the works. They could have been out there for another hour and still wouldn’t have scored.

The defense is being pilloried in the press because Biabiany was hard to handle on the left but I didn’t think they were that bad. There was only one real chance for – assuming you discount the own-goal Samuel almost scored – only one uncontested shot they took and they scored on it. Having said all that, I think that one real chance was very, very, very bad.

I had no problems with the way Ranocchia played. One could say that he – and the other defenders – was out of position for that goal, but I don’t think he was. He was supposed to be on the right hand side and he was. He was dominant in the air. And he covered for Zanetti when he was beaten on the right a couple of times. As I said, I thought he was very decent.

Cambiasso was probably the best midfielder on the field for Inter last Monday. That’s not really saying too much, but there it was. There was no way that he could have held the thing together but it was a brave performance.

In that vein, I have a lot of respect for the performance of Guarin. He had a nice free shot that looked like it went close, he ran a lot and his attitude for most of the game was admirable. He looked like he had a shot at committing a professional foul to stop the scoring opportunity but didn’t take it. I don’t know if that should be or not be in his favor – committing stupid fouls is usually not a great thing, but we might have forgiven him for this one. Besides, he was very much in doubt for this game and he played anyway. Given the injury issue we have had recently, his big sacrifice outweighs his modest – but still adequate - performance.

I think it goes without saying that Handanovic was the best player we had on the field all day. If there was a smart purchase that this team made last summer it was this guy. 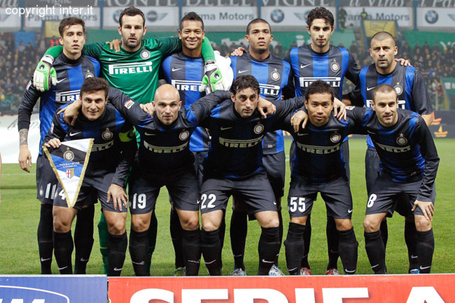