Inter continue its campaign to return to the Champions League by winning it’s second league game in a row at home against Napoli 2-1.

To win the Scudetto is simple if not easy. Beat the bottom half of the table teams home and away, win or draw your home games as much as you can and if you have to lose – lose to the top teams since everyone will drop some points here or there against those guys. If you can do that, then you have a shot. Inter have lost some games against teams that are trending downwards in the table but are making them up against the top group.

Not easily mind you, but the big game fight is showing its face. Napoli are a good team and they are run very well by Mazzarri, who as Strama noted in his post game words, has been in charge of a successful project for 3 years now. Personally I am not a big fan of Mazzarri’s, but that doesn’t change the fact that the man has his team humming on all cylinders when it’s on its day. And in recent years against Inter, it’s had plenty of good days.

So this qualified as a big game, not because there’s some mythical place called the Anti-Juve, but after a dismal November there needed to be a confirmation that Inter can be considered a team worth the top spots. It might be hard to remember but the first 4 games: win 0-3, loss 1-3, won 0-2, loss 2-0… sound familiar? Then there was the formation shift and there was a 6 game win streak. More recently it went 1 win, 1 draw and 2 losses. So the question needed to be answered: which Inter was the real one: was it the up and down beginning? Was it the winning streak? Or was it the downside of the mountain that followed?

I don’t know that this game answers any of those questions, mostly because I think that that all those teams that we saw in the previous paragraph are this season’s Inter – it is a little erratic this season.

But that doesn’t mean that there didn’t need to be an answer to the recently, somewhat deserved criticism. Inter weren’t playing as well as they were in October and although the team played well against Palermo and probably "deserved" the win, if there is such a thing, the actual goal that won the game was damned lucky.

In addition, a win like this is a good measuring stick. Playing well against the top teams in the league raises expectations, sure, but this game raises the level of confidence of the team, hopefully, for the rest of the month.

Onto the game itself. Strama changed formation slightly than what he had been working with previously. He went with the 3412 instead of the 343 because he thought that the midfield would be too strong for a 4 man middle. He made a huge psychological leap in trusting the wings to Nagatomo and Pereira. He included Gargano, Zanetti and Guarin in the middle with Guarin slightly in front of the other two guys. In defense Strama went with Frog on the right, JJ on the left and Cambiasso as a Ye Olde Tyme sweeper in classic Inter mold. Supposedly Naga and Pereira were supposed to protect the outside with their speed while Gargano, Guarin and Zanetti worked on their counterparts in the middle.

But no plan survives first contact. And when Inter took an early lead all that planning basically went to hell. Yuto and Alvaro were still watching the flanks but would double their efforts out wide by trying to overload one and then the other or add more players to the wide battles. Yuto made Stama’s heart skip beats by making several forward runs that resulted in his having to sprint at full speed back into defensive cover and potentially causing holes in the carefully schemed defensive screen.

After the game, when the players spoke to the media we would learn just how carefully this game was planned… right down to the corner kick movement that Guarin would score off of and force Inter in a more defensive posture for the rest of the game.

As everyone knows they can, came back to try and bring the score level. You know, it’s funny how some coaches complain that the players at Inter are too cliquey and won’t listen to outsiders, but then you get this young guy who gets them to follow this carefully laid plan right to the letter. tried to come back with the player that I will never forgive Branca for not buying when the chance presented itself – Cavani. What a great player he is. But the defensive plan that Strama came up with basically stifled the attack. Don’t get me wrong, had their chances and Cavani probably blew a big chance to level the score with a nice play on a header that he probably buries on any other day. But it would have been the conclusion to very nice play that would have beaten anyone. The easy score and the work of Batmanovic helped to frustrate and stall a potentially lethal attack. And later in the game when Napoli were pressing, they got sloppy in the back and allowed Guarin to collect the ball and counter with a beauty of a through ball right down the guts of the 3 man Napoli backline for the Milito score and doubling of the lead.

It was an impressive performance by all levels of the formation – defense, midfield and attack. Just as impressively, the manager didn’t screw it up with poor decisions. Strama changed formation when Napoli did, moving Guarin off to the right to help Naga with the right wing when Napoli added another attacker in the second half making it more of a 532. Cassano played his customary hour-ish and was promptly given a rest for Palacio. Strama made another like-for-like substitution when Coutinho came in for Milito. The back eight were doing their jobs and there wasn’t really a need for further tinkering.

I liked the realization that Strama planned for this game as extensively as it was mentioned in various post game interviews. It means that he can plan well, first of al. Secondly, it means that he used the time that he made for himself by playing the youngsters on Thursday in a productive manner. Remember, the last time he sacrificed the Europa game it didn’t look as though there was any rest for the vets as they struggled against and lost all 3 points in a very winnable game. This time it looks like the team and the coach learned from that mistake.

There was everything to like about the game that Guarin had and I am not just talking about the score that he had on the corner. When he’s on, he has such an enthusiasm about playing that really shows – a real force of personality that can carry a team through periods in the game. The newspapers today talked about how he touched the ball 90 times and was the thrust of the Inter midfield. All that is true, but here’s what I saw that I really liked – when he got the ball he turned up field immediately and if there was no one in his face, and sometimes when there was, he tried to dribble his way up forcing a reaction from the other team, often a foul to stop his momentum. When the other team has to account for you and bend its zones to you it creates space for others. And those others that Inter have up top can make teams pay.

I also liked the chance that Alvaro had in this game to show that he can handle a side of the field. On defense he followed his marker into the box – something that sometimes gets overlooked on this team. In the attack he does a lot of what Guarin does – he forces the defense to react to him allowing others to get open. All these players are in phenomenal shape but he sometimes seems on another planet with his combination of speed and strength. If he continues the good play I can’t see how he doesn’t become a fixture out there.

It seems like I say this every week but I continue to be impressed by Rano and JJ. I get all warm and fuzzy watching them get better and better over the course of a season. I don’t know if we continue to work with the 3 man defense after this season, but as it is, I feel pretty comfortable with these two guys.

It’s hard to start – or continue – criticisms after a win like this because it just feels good to beat a good team but there were problems. We continue to not have any way to hold possession and it doesn’t matter if Inter is winning or losing there isn’t any mechanism to keeping the ball away from the other team. I keep mentioning the "Motta" player but even when Inter is ahead, there has to be a way for the team to let the defense get some rest and reclaim position. This team can’t, or maybe shouldn’t rely on a defensive shell so much. I understand it and I am trying to be patient about it, and the team is doing much better than I anticipated for this season, but it sure would be nice if I had confidence in the quality of the midfield. That isn’t to say that I am not appreciative of its heart or grit, but is it too much to ask for that little bit more? Or are we never to be possessed of that type of midfield?

One more criticism I have, and it’s a minor one, is that I would have liked to see some/one of the young guys get on the field for a big game like this. Again, I get why it didn’t happen but that doesn’t mean that I don’t think it should happen. If I were Strama, I don’t know that I have the guts to put in a kid when the games mean this much. So I get it. But I can’t help thinking that there’s got to be space somewhere at some point. And to be fair, Coutinho did get a cameo, but I think his job at the time was a tactical one – pounce on a mistake, "pressure" the defenders and get in the lanes of the easy pass.

In 5 days Inter take on Lazio in what will be another big game. Lazio, as of this writing, have won 10 out of a possible 12 points from their last 4 games. They play tonight, away to , in what I anticipate will be a 3rd league win in a row which should elevate them to 4th place immediately behind . They are very much in form, as of right now, and are deserving of every bit the attention that got from Strama.

I suggest a week of low salt, low red meat and high fiber diet to prepare for the nerve wrecking to start again. 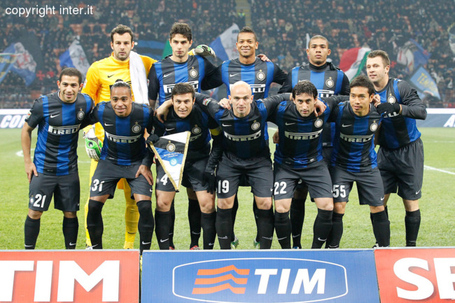