Inter come away from a trip to Rome and a battle with Lazio with no points in a heart breaker. This is one that will stick with me for quite a while – although I am trying to get it out of my system by any means necessary.

As exhilarating as 2 weekends ago was in beating in what I thought was a great game to watch – not just because of the victory – I feel that this game will weigh me down some.

The game was an interesting contrast in styles. Lazio, I am given to understand, basically played their everyday formation and players, while Strama tried to sneak in a little 4 man backline in a 4312. Both styles have their merits and in the second half when we released Naga and Pereira from strict defensive duties we looked much more potent. I certainly can’t blame Strama for the personnel choice as most of this selection have been playing regularly, if in slightly different locations on the field.

It wasn’t a great game to watch – in fact both teams plus the refereeing were kind of terrible. Inter more so in the first, less than in the second. But it wasn’t to be an Inter day of happiness. This team isn’t good enough to overcome getting as close to a goal as possible twice and come away with nothing. Lazio played Inter in much the same way that Inter has been playing other people. Lots of pressure. Lots of running. Everyone is behind the ball when defending. Mostly, they are dangerous on the counter.

But that’s what made this game frustrating. Lazio are a good team, if not an easy one to root for, and I think that the two teams are probably right at the same level at this point. But when Inter finally started to attack after bunkering for the first half they looked very dangerous. Not counting the 2 uprights hit, there were at least two other chances that Marchetti had to perform miracles to save. Ranocchia – Lazio looked scared to death of him on the corners, by the way - beat two guys on a corner and just put the ball over.

This isn’t to say that Lazio didn’t put Inter in any jeopardy. Klose came, pardon the pun, close twice: once he mishit it right to Handanovic and he buried the other. In the first half Lazio had the ball in our half quite a bit and there were a couple scrambles in the back. Inter are being roundly criticized this game for being defensive in the first half but I don’t see how this is a great departure from what Inter did against Napoli – minus the 1 goal lead very early. Lazio officials, including the coach and the owner, were crowing on Saturday that they were attacking much more and were only threatened by Inter for 20 minutes. But for all the rhetoric that I have read about this game, Lazio’s 2 best chances and only goal against Inter came on a counter play. Besides, most of that crowing had died down considerably and started to turn into "Inter are a great team…" quotes by Sunday morning as questions about the refereeing were being brought up.

And the refereeing was again an issue in this game. Ranocchia was thrown down in the box by his shirt. Hernanes was protected from getting cautions despite a "Johnny Sweep" of Guarin’s legs. Guarin in general was manhandled and like last week against Behrami, the other team was given a lot of latitude to do so. An Inter 3 on 1 was stopped supposedly because of a foul, but it took reading the ref report to discover what it was because no one could ID it on replay. Better people than I keep telling me it all balances out, but I am still waiting to see Inter’s scales balance.

But – and as we can see, I am still not really over this game yet – to go back to the game, the real difference between these two teams is the Inter’s lack of a creative force in the midfield. Inter created chances in the second half by pushing their advantage in the wide positions – at one point, Inter’s entire offense relied on Nagatomo getting the ball forward almost on his own. But each chance had to restart back to where someone could collect the ball. Lazio throughout the game used the midfield triangle of Ledesma, Mauri and Hernanes to keep possession and control the clock. They didn’t have to rely on the ball going all the way back to their defense to restart their attack. They were able to push forward such that when the ball was cleared they had defensive numbers inside our half to retain possession and continue to probe for a weakness. Lazio’s lack of any real wide threat allowed Inter to pack the defensive center over and over.

To Inter’s credit at these times, the defensive 4 held up surprisingly well considering the last time Inter used it was in September, I think. I don’t think it was caprice that made Strama switch. The more I think about it, the more I believe that Strama wants to go back to a 4 man backline once a January midfield signing is done and the midfield can be expanded a bit. While I might argue that Lazio was not the best place to start the re-indoctrination process, it really didn’t hurt final score. Not being able to stick the ball in the net after beating the keeper twice is what hurt us the most.

The best of the team, in my opinion, was Nagatomo and Guarin – both of whom ran their collective buttocks off for the team. Both also contributed offensively: Guarin hit a post and Naga came really close on a put back that was miraculously saved. Ranocchia came a close third, I don’t blame him for the goal – but he blames himself, I’m impressed to say. Mauri had a clean look for the through ball and Klose turned and shot in the same motion with barely a step in advantage. It was a nice play and a clean shot. I am happy to report that Klose didn’t feel the need to dive - in that instance - and just played the ball well as the very good player he is.

The worst was probably Milito and Gargano. Milito was a statue really and his only contribution to the team’s efforts would have been as a passer to Cassano who was wide open on the stopped 3 on 1 play late in the game. Gargano got a laughable caution for having the nerve to challenge Hernanes running down the field step for step despite it being, you know, his job and all. But otherwise he didn’t really contribute anything other than his lungs. He’s a loan to the team and despite getting a lot of playing time I am really leaning on his going back to whence he came next summer. Lungs can always be found, but if we can get someone who can run close to like he does and pass a little/lot better, that might be more ideal. Here I am thinking Obi, assuming he heals up some/a lot for the next calendar year.

Some of you might have noticed that The Club World Cup was played this past weekend, and for the second time Rafa Benitez was the manager of a team present in the finals of that competition that he didn’t help win the previous season. Well, this time Rafa can’t brag that, Hey! He must have done okay at despite all evidence to the contrary because he won The Club World Cup! No, sadly, only Inter has the distinction of winning that trophy despite Rafa’s absence the previous season yet concurrent ineptitude while lifting the trophy. If only Marco Materazzi could have been at the finals for a well deserved taunt.

Fredy Gurin was fined and banned for 1 game for his actions at the end of the Lazio game. Guarin, it seems was angry at being taken down outside of the Lazio penalty area in the closing minutes from behind and kicked while down. When there was, eye roll, no whistle, he made appropriate comments to the linesman at the inappropriate time. He was right that the linesman missed the call and all the names/threats that he probably said. He was wrong to do that while standing on the field. There are better times to do these things… In any event, Guarin gets an early vacation missing the game. Look, I understand the kid’s anger, and I probably would agree with just about anything he might have said to the linesman including physical threats, but there is a bigger picture and he has to be more aware. As it is, I am staring to like the Leeeeeroy Jenkins comparison more and more.

It seems that Lucio’s time at yet another Serie A team is coming to a close. This dismissal was probably more predictable considering his inclusion onto the team was really more of an Anti-Inter pogrom than as a player of value. The man didn’t speak for 3 years while with Inter and then he’s marched all over the place for interviews about how bad Inter was to him. I wonder if he’ll make a few interviews about how he was paid half a year’s salary just to be a pawn in someone else’s media campaign. Quite a drop in prestige from winning the World Cup with and winning the Champions League with us is the Juve Stooge Job, I have to say. Ah well. Maybe he will take the hint and retire. 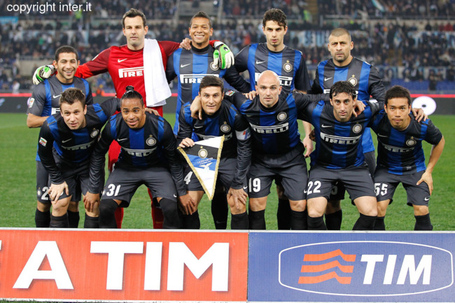