Hellas Verona (of Tim Parks fame) travel to the San Siro for the first time since 2001 (when we beat them 3-0). They are riding a fairy tale high, the only lower division team still in the competition. Well, that better end tomorrow because crapping out of the Coppa Italia now would be too embarrassing to consider.

What: Inter v Hellas Verona, Round of 16, Coppa Italia
Where: San Siro, Milan
When: Tuesday, December 18, 8pm local time (noon pacific, 3pm eastern)
How to Watch: Live on both beIN Sport 1 and 2 (other channels here), or find a stream (try here)

You will notice that Hellas Verona has never beaten Inter at the San Siro. Never Ever.

The last time they were in town was for a Serie A game in 2001 (December 19th, to be exact). We beat them 3-0 with a double from Ronaldo and a goal from Bobo. To put things in perspective, Hella's starting lineup for that game included Adrian Mutu, Camoranesi, Oddo, and Paolo Cannavaro. Crazy.

Hellas Verona isn't a terribly historic team. AC Hellas Verona was created in 1959 with a merging of AC Verona and local rival Hellas. They mostly bumped around Serie B until 1968 when the finally achieved promotion to Serie A for an extended period of time. They managed to win the Scudetto in the 1984/85 season, the only year that referees were chosen randomly in the Serie A. Things went generally ok until the team went under in 1991. They spent a few years as Verona FC before finally ending up as Hellas Verona FC in 1995. (yikes). They played a few more years in Serie A and were finally relegated melodramatically on the last matchday of the 2001/2 season. And they practically haven't been heard of since. They spent a few years bumming around the C1 circuit (trying to find themselves, one assumes), and almost ended up in the football never never land of Serie C2 (shudder). Last year they managed to pull themselves together and win promotion back to Serie B, and, after taking out Palermo and Genoa, now find themselves back among the upper echelon of Italian football once again, at La Scala del Calcio, the Stadio Giuseppe Meazza. 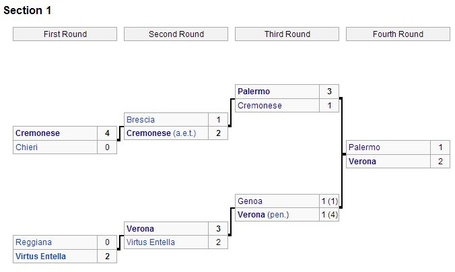 As you can see, Verona squeaked past Genoa (well, until they went to penalties) and just plain beat Palermo. Granted, both are having historically abysmal seasons (Genoa is second to last and Palermo is one point above the drop), but even so, it is a remarkable achievement for Hellas to have made it this far.

As for their league form, Hellas has been having a pretty decent year. They are in third place with 36 points, nine points off leaders Sassuolo. They have only lost three games all season - all away from home (excellent). Recently, they are in a bit of a slump, only winning one game in their last five.

FUN FACT: Andrea Mandorlini, the coach of Hellas Verona, is a childhood Inter fan. All the best people are.

Hellas has the second best defense in the league, conceding only 16 goals (Sassuolo is first with 14). Offensively, their 30 goals put them fourth, just above Bari and Juve Stabia. Their high scorer is Daniele Cacia with 10 goals, followed by Gomez with five.

OUR HEROS, I SERPENTI

First, just let me say that I cannot tell you how happy I am to be writing this. It has been a snotty, bumpy, itchy, nauseous couple of weeks but I am all better now and not even on any medication (I have found that benadryl is not conducive for anything really except long periods of near-coma unconsciousness). So hooray for me. I watched most of the Lazio game on Saturday (at 3pm, curse you beIN Sport) and was, well, mostly just sorry. I hope for a bit of turnover and a much more spirited performance tomorrow.

As far as I can tell, Inter hasn't released a call-up list for the game (too controversial?). I guess Strama wants to wait until after training tomorrow to make his final selection. Hmmm.

The big news seems to be, though, that Chivu and Mariga are back and ready to play. Mariga has been out since last season with a cruciate ligament injury while Chivu has been having foot trouble for months. Word is, Chivu could even start tomorrow, maybe with Duncan even. Now if we can just get Deki back after the break we could be back to almost full strength. Not including the whole Sneijder drama, that is.

As for lineups, without even a call up list I have almost no clue. Cambiasso was kicked a bit in Rome so it is likely he will sit. Milito was invisible for most of the Lazio game so I hope he sits as well. As for the rest, Inter have been taking this competition seriously for that last several years so I expect that Strama will send out a team that can win. I really really REALLY dont want to think about losing tomorrow. So I'm not going to. Problem solved.

Hellas will be all pumped up on adrenalin and looking to continue thier amazing run. Plus, as they say, Hellas has nothing to lose. Word is, they are bring 9000 fans to cheer them on. Still, I have to think that Verona's first goals this season is to be promoted. They will field a good team tomorrow - to save face if nothing else - but I wonder if they will give that 110%. Which suits me just fine. I like winning the Coppa Italia. I like the little patch you get to wear for the season. I like the trophy. I like the confetti and the fireworks and the small sense of accomplishment. Sure, it may be a booby prize, but it is still a prize and that is better than the dreaded Zeru Titoli. Loads better. I say, let's go for it. Let's take these butei down and teach a whole new generation of Hellas Verona players to fear the San Siro and the serpents who nest there. But in a collegial, festive, holiday-y sort of way. Ok? Ok!

Let's not even get into the whole Gianluca Rocchi thing. I am attempting to let bygones be bygones.

This last weekend was the annual Inter Christmas Party. Wasn't it nice of them to post video up for us all to gawk at?