The Coppa Italia ends almost anticlimactically 2-0 for the hosts in Black and Blue. But there was so much more happening this week that it merited a round up.

Share All sharing options for: Inter 2 – Verona 0; Coppa, Europa, Life and Everything

The game started out the way one should have expected by us by now: surprising starting roster with a decent amount of turnover and a few youth players sprinkled in. That’s the Inter MO for cup games now.

And I am not complaining. got his second official appearance in the snazziest shirt in football-dom and he looked like a Primavera player who was very nervous early on. In fact, neither him nor Mariga who was his partner in that crucial area of midfield looked too convincing and look good advantage of that fact early on.

Chivu, returning to the field after a lengthy layoff looked as good as can be expected considering that his athleticism has been falling precipitously for years now and he’s coming off a long layoff. But against a Serie B team he was more or less fine. Silvestre was what we came to expect from him lately – not too convincing but not catastrophic. Rumors are that Inter aren’t thrilled with what they are getting and that he’ll move at some point. I don’t disagree but I feel bad for him because he needs – like everyone else at this club – time to settle and time to play. He’s hasn’t gotten much of that and it shows. Juan looked powerful and confident as usual. The pairing of Palacio and Cassano was nice to watch, especially in the second half when they were warmed up and it looked like was running low in the tank. I have no criticisms for Alvarez. He was most responsible for moving the ball up and down the field in the first and a lot of the second half. He did threaten once or twice, but most of his work was between the boxes and I thought that he did well considering, once he shook off some rust – which I don’t blame him for at all. Special mention goes to Nagatomo who played this game with what seemed to me to be the effort and intensity that he plays Serie A games. I loved it.

Inter did the usual in the first half, which is to withstand the other team trying to blitz us and put us down. In the second half when the emotion ran out and the legs got heavier Inter went to work. Guarin came on for Mariga and the pairing with was beautiful. Look, I know it’s a Coppa game against a Serie B side, but beauty is beauty, when you see it you see it.

Guarin as is becoming usual lately has been the energy part of the equation in the chemistry of this team. He has tremendous amount of enthusiasm and personality to just jump off the field and hit you in the brain. What a change from earlier this season when we were all wondering where that enthusiasm was, remember?

So, Guarin masterminds if not scores both goals and Cassano and Palacio in true competitive spirit try to make something of their own three or four times as well.

Castellazzi got injured at one point in the second but waved the bench off when it looked like Belec was going to come on. Strama apparently took that to heart and made a third sub to take off Cassano, probably in light of the match coming up VERY early on Saturday. Soon after, Castellazzi makes another save but reinjured the shoulder. He gets stretchered off – dislocated out for a month or two – and one of the outfield players took up Belec’s gear. At first it looked like Chivu, but it seems that Javier had his say and intelligently took off a forward to fill in the keeper duties. Palacio did great and even made a save or two that looked like made the difference between 2-0 and 2-1.

In thrilling 1-2 game in which I caught the last two goals of before passing out right in front of the computer after a very early/bad at work, Bologna surprised Napoli away from home to volunteer themselves as the next Inter opponent for the competition.

To be honest, I was not looking forward to facing again so soon. Bologna must be taken serious considering the heart they showed in coming back in that game, but I don’t think I am insulting anyone by saying that Napoli are just a difficult, frustrating team to play against. isn’t a pushover, but frankly, they aren’t in the same quality as is right now. So in a way we dodged a bullet. In another way, we are facing a dangerous team who have nothing to lose and everything to gain. If we continue to put in the youth and recovering for Coppa games, we might very well lose in the next round. By the way, that wouldn’t kill me, either. I could do with less distractions and obstacles for The Blue and Black Band. In case you were wondering:

Inter have drawn CFR Cluj in the next round of the Europa. If we were beat them over two legs we get to face the winner of the Tottenham – tie.

For those unfamiliar with , it’s one of the biggest cities in , nestled in the northern half of the country and is the biggest city in . The settlement of the city predates the Roman incursion in that part of Europe and after a brief decline in the 90s, is considered by Wikipedia to be an urban area with a rich educational, cultural and economic environment.

Since their ownership changed in the early 00s, Cluj has been a major force in Romanian football including trips into the Champions League and the Europa League. Three or four years ago they had an incredible group stage appearance in which they beat Roma and had a draw with before finishing last in their group. Cluj won their league title last season and finished third in their Champions League group which I find to be a great accomplishment to them. They had 10 points, a positive goal differential and their group was Manchester United, Galatasaray and . I don’t think that this will be a team happy to be in this stage of the European cups and I do think that this will be a pair of meaty games. If we get past these guys the games afterward look challenging as well. So, the talent quotient of the Europa League has just taken a large jump. Let’s see if we are up to it.

For those who are interested Livaja is joint 3rd on top goal scorers for the competition (Palacio, and everyone else in the world is joint 4th with 3), Fredy Guarin is joint 1st in the competition in assists with 3. But there are still as many games to play as Inter have already played, I think, so there is a looooong way to go yet. 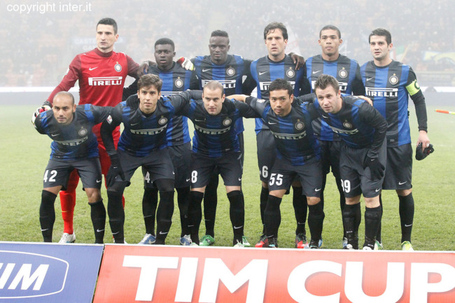