Share All sharing options for: Inter 4 – Palermo 4; The Good, The Bad, The Ugly 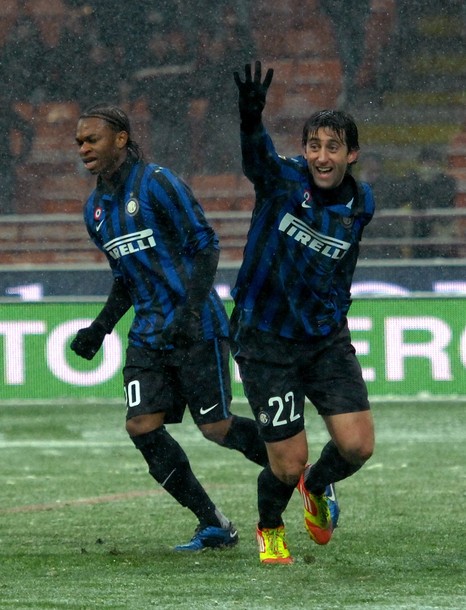 It was a game that probably shouldn’t have been played considering how bad the conditions on the field were, but I give a lot of credit to the boys for going out there and not giving up. I have talked a lot about the desire of this team and if it still has it – well, we had desire today

Most of this game took place in a slog and I was watching an extremely good feed and I lost track of the ball constantly, just like I lost track of the end lines. That last bit doesn’t bother me too much; I certainly had lots of company as the linesmen didn’t seem to know where they were either half the time.

There’s just not a lot to say about this game, it was so far a departure of a regular, normal game. If you think that watching this game will give you some insight into the result of Inter’s mercato or the future effectiveness of any player on the field, then, in my opinion, you are fooling yourself.

This was just a fight over a ball that you weren’t allowed to use your hands in that time just ran out on or there could have been goals in the double digits.

Moving on regarding the Motta transfer... However you look at it, and by the echoes of screams and wails I can hear outside my window many Inter supporters don’t appreciate it too much, a job opening has been created. We better figure out quick if Poli, Palombo or someone else is up to it.

The good section has to start with Andrea Poli. In terrible conditions, under constant kicking, slide tackling and pushing he stands out as maybe the best performing midfielder in the game today. The boy was battered and received very little protection from the officials. At one point near the sideline he was literally thrown off the ball as play was allowed to continue. He got up and continued to play.

He was all action, all the time and he was making good passes in the snow that others – especially our Brazilians – found very hard to do. Does this mean I think he’s the answer to the midfield because he played well today? Not to me. He’s an option that I think we should explore further, however because the kid’s a freaking demon on wheels with his pass and move schtick.

I don’t if it was by design or if it was organic but Wes seemed to be playing in that strip of clear grass almost the whole time he was on the field. That helped him with his precision dribbling and passing sure. But what I want to talk about here is the fact that he came back to help out on defense. There has been a bit of a bru-ha-ha regarding Ranieri and Sneijder. Wes could have played the SupahStah card but he didn’t. He responded by playing hard and looking like he wants to win. Nice.

Look there were really no such things as position out there today, but on the left Naga was a monster. He got the crap beat out of him but he made a hell of a run to get on the end of a Poli thread the needle type pass than made Munoz foul him. He made an earlier promising run that was also a penalty shout, I thought. On top of all that, he was pretty good on the ice for a little guy.

How could I have possibly left Milito to this far down to mention in the good section? It was this, and maybe it’s a little churlish, but he could have had like six goals all the looks and chances he was getting. He missed one shot inches wide. He had a header taken out of the goal for some reason – I think it was because Maicon’s pass was out of bounds. He was inches offside on his goal, and that’s unfortunate, even though the ball came off the defenders foot – I think there’s a stipulation for that but I am far too tired to look it up. The goal that I thought was the best was the one where Pazzini tried a volley and it just didn’t come off right and the reaction time it took for him to nail that thing in there was amazing. Nice.

The defense was bad, but that should be expected in a game like this. No doubt there will be lots of people blaming Ranocchia for this draw and I think that’s crazy. Was he very good today? No, I don’t think so. Was he very bad, today? Not really. He was responsible for one goal, by my count and frankly after seeing the replay, there just wasn’t anything he could do as he was in perfect position on Miccoli and the little shit just put the ball in a perfect spot.

Just for masochistic pleasure here are the goals against today: Corner – no one watching back post = everyone’s fault, Miccoli against Ranocchia = perfect play, Miccoli header (!?!?!) against Nagatomo = if Miccoli’s scoring headers it’s just not your day, Miccoli against Lucio = Lucio beaten. Looking at all the goals I would cast a share of blame on Cesar too. At some point you are just going to have to sit tight and watch your back post instead of over committing to the near post, especially if you’ve already been beaten there once and you realize that conditions won’t let you so anything quickly.

The Crazy One has the Yips. There is no other way to call it. He just needs to put his underwear on backwards, wear a tie on his forehead and hang tassels off his boots. In other words, he’s got to do something to take his mind off the fact that he’s not scoring a lot and play relaxed instead of tight.

It’s time to pull the plug on this one. I get that he’s basically the only offensive sub we have with Forlan out – is it weird that I forget that he’s even on the team at times? – but it might be time to start bringing in Castaignos on these occasions even if we know there’s nothing he can really contribute at this point. It’s more productive to get him game time experience than it is for Zarate to be in uniform. I said that this game was meaningless in making any sort of judgment on a player going forward, but that's not what I am doing here. I am just giving voice to my frustration over this joker that has been building up for a while. This game just gives me a chance to rant about him.

I don’t even really know what I want to say here but there has been such negativity regarding this team lately it’s a little disheartening. I am not really talking about our readership here in particular, but just in general.

I mean, I understand and sympathize that people aren’t really happy with the markets lately, and frankly neither have I really, but there is a new reality that is occurring around the team and people need to understand what that is. Motta wasn’t sold because the management wanted to make the team worse. Motta was sold for lots of reasons; not the least of which was his salary, his diminishing ability to get over what Inter paid for him in a future sale, his general health or lack thereof and his very narrow skill set.

All that is great but the supporters are taking this as some kind of negative future sign over what's going to happen to us in the future. That whatever we are transitioning into Motta would have allowed us to win while we do it. And maybe all that is correct. Maybe the transition into whatever Inter will turn into next could have been made easier to swallow for the fans with Motta on the squad and Inter probably doing better in the short term.

But that wasn’t the way the management saw things. They saw a way to gain funds and salary space and they took, even if it means that they ripped the band-aid off the team instead of slowly letting it detach over time. I am sad to see Motta go, as Drewsf said in so many words, he had a place and an important role here. I was sad to see Eto’o go, but like Motta, he wanted to get one last big paycheck. Inter wasn’t going to give it to him either so they got as much for him as they could, some €25-30 million. It’s a shame and in the end it sure looks like this season is the sacrifice for some accounting reorganizing and roster shuffling. And that leaves a terrible taste in my mouth. I don’t want to sacrifice seasons, I want to win.

I don’t know what the new reality is or will be for the team. But it’s getting ugly out there fast. At the end of this game supporters were yelling and abusing Ranieri. The team, including Zanetti came out to defend the coach – and all reports say that Zanetti was IRATE at the fans about the whole thing. I don’t blame him. I like to think that Inter supporters should know better about this stuff. We have had a long time to look at other teams and how their supporters act, at how unconstructive all the criticism is all the time. I don’t agree with some of the stuff that Branca and Moratti have been doing lately, and I have been critical of them, constructively, I hope. And I hope they continue to follow the plan that they have come up with to bring the team in line with the general European/Italian recession and FFP. I don’t really care if the plan works or not, as long as there is a plan, I’m pretty happy. As long as there is a team there in black and blue, I will be following them.