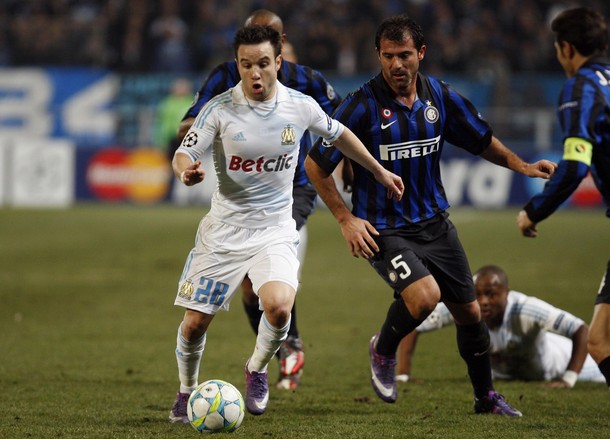 So there isn’t really much to say that hasn’t really been said before here on these pages. We made our chances but there wasn’t enough quality up front to put those chances away. Those who played in the midfield and the defense really sold out in an effort to keep OM out of the goal weren’t rewarded for their hard work as the last kick of the game and a deficiency in the back penalized the team that probably had worked hard enough to make an argument for a draw. The concern here is that the team take this loss as a "why should we bother?" instead of "I am sick of this, let’s go out and really make a statement".

Tactically, if it matters, OM had a simple plan late in the game after having been frustrated trying to hammer at the defense in the middle and on Inter’s right – attack Inter’s left corner and cross into the middle for a header. They did it something like 3 or 4 times in the last 5 minutes or so and attacking Chivu who already was on a yellow wasn’t very daunting, frankly. Oh, I blame Chivu for being in the game and being Chivu for a lot of it, but I blame Ranieri quite a bit too. What was Chivu doing there late in the game on a yellow in the first place? Why didn’t Ranieri use that last substitution, bring in Poli for Chivu on his yellow to protect the defense and the draw, move Zanetti to right or left, Naga to the opposite side of Zanetti for the closing 10-15 minutes. That way none of the defenders had to be particular cautious – they could just defend. That last minute corner didn’t have to happen at all, let alone getting a better player back there.

But the lineup itself was an issue. You all know how I feel about using the younger players in a season like this – a season that we aren’t going anywhere – to at least not make this season a waste, there can be some good that happens until May, so that the young guys can get minutes and the coaches/administration can see what they actually have to take care of during the summer.

I have said it and I am sure you are all sick of reading it. So, I’ll leave it at that.

Now, I am not insensitive to the coach. I don’t like Ranieri, but I want to be fair to him. I would hate to see another coaching change – mostly because… and I want to clear about this… mostly because I do not consider what we are witnessing this season to be his fault. He takes blame for being a mediocre coach as was seen today, but that’s not a crime nor is it a bad thing necessarily. It just means that the team has to have more talent to compensate for his flaws as well. The “benefit” for having a mediocre coach is that he won’t lose too many games for the team on his own.

As I said, I want to be fair Ranieri so I realize that it’s not exactly fair to send young guys out there in an away game in the Champions League with all the European press watching. But, putting every 30+ year old on the roster no matter how recently they got back on their feet from being on the training table for months. However, there are players who look like they can not only handle it, but are champing at the bit and frothing at the mouth to get in the game.

There really isn’t much more to discuss about this game. The vast majority of the time spent seemed to be in the middle third as the midfielders of both sides consistently sent passes awry in an effort to advance the ball. Which tells us all something about Inter’s midfielders, yeah? My last talking point here is that I just do not understand the aversion to playing Poli in the midfielder. I do not understand it. I also hope that Guarin has something to show us too, so that we not use him either.

The NFL draft is coming up, right? That's kind of interesting, isn't it? At least those guys use their young players more, don't they?