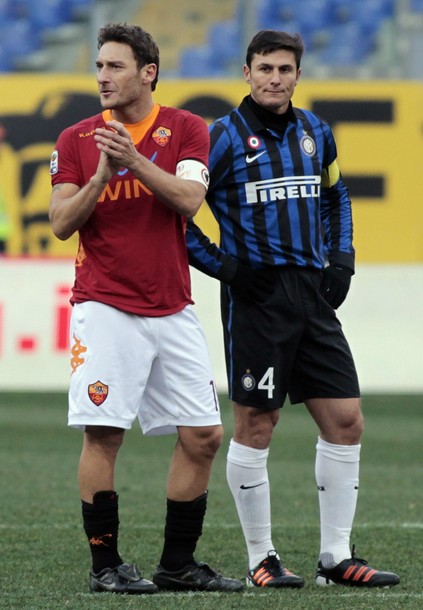 It’s never fun to be on the end of a big loss, but it’s particularly jarring lately since they have become rare-ish these last six or seven years. I have the feeling that there are going to be a couple more before the end of this season arrives and we persist in this limbo that exists between projects that we seem to be trapped in.

I wish I could think of a cool sci-fi reference that can bring this point closer to home but I got nothing. That might be more interesting to discuss in the comments rather than the game – it's like ice-cream or something.

As far as the game goes, everyone did poorly with the possible sole exception being Milito who came close - on the one ball that he was able to drag into shooting position himself, by the way – relatively speaking. It was probably the only highlight we made in the game.

I am going to give relative kudos to Poli, Nagatomo, Obi and Faraoni. There was a lot of hate for at least two of these on the LiveBlog but it didn’t come from me for lots of reasons. First of all, I believe this game to be a failure of The Fogeys© ™ - yes, that’s my official term until they are all gone. The young guys played their hearts out and it was obvious to me. When Maicon was walking up and down the field or Lucio and Samuel went through the motions, Obi was playing on both ends of the field. Nagatomo was running up and down. Poli was fighting and battling in the middle. Faraoni ran onto the field as a late-ish second half sub for Maicon and I wouldn’t be shocked to learn that he covered more ground than the vet.

It’s not about talent at this point. It’s about desire. I don’t care anymore if they “have it” or not. They are what we have to work with at this time and this place and frankly they “want it” more than many of the older guys do. I will follow “want it” everyday of the week win or lose, rain or shine. Sooner or later we will get talent to surround them but having guys who are charged up just by stepping on greenish ground over corpses wandering around are what I would rather have.

But I was talking about the failure of The Fogeys. It’s impossible to me for these players to earn so much and care so little whether they won or lost. It’s endemic of perhaps too much certainty about the team. There isn’t so much worry about losing a job that there should be. I don’t think that Maicon is afraid of losing his job as he should be. Cesar isn’t as afraid of losing his job as he absolutely should be…. wait for Viviano to make it back to the fold for that to happen. I think it’s about time for it to happen. I don’t think that Cesar is totally past it yet, but I think that there is an argument for getting him gone before he completely collapses too. I have already speculated that Javier isn’t the type of player that we need in the midfield right now, we have enough ball winners, frankly. Last game we had 9 ball winners/goal keepers out of 11 players. We might need to put in some kind of offensive type player here and there, ya think? Would the vets allow a player like Javier take a seat? Would Javier allow it?

Which brings us to the next obvious question… and the second problem this game exposed; do we have a coach who would have the stones to talk to Javier about sitting? We go back to Mourinho – everyone loved him and he was friendly with everyone… until you didn’t perform and you just knew that he wouldn’t hesitate to axe your ass for anyone. Look at Maxwell who became his bitch in January of his first year. Maxwell pissed off Mourinho and Santon started playing. Everyone saw it and everyone knew what it meant.

It’s really the only move that the modern coach has over his players. He can’t yell anymore because then the player will just leave, after all, who needs all the abuse and what else is an agent for, right? So the coach and the players have to come to an understanding and the coach has to persuade everyone to pull the same way. Mourinho was given almost total control of the team. There was no appeal to Moratti with Mourinho. Given reasonable cause I think Ranieri can get his will backed up by the management in a similar manner and I think he has to make a big impression. Maybe Javier is too big. How about making Maicon sit for Javier or Faraoni after he pays for his yellow accumulation ban? How about giving Ranocchia room and making Samuel and Lucio rotate? How about starting Poli and Obi every game in the midfield to give them playing time?

There just needs to be a statement of purpose, in my opinion. By giving the young guys room to play, that tells everyone this is what we are playing for – the next generation. Current generation should be on notice – playing time is at a premium for you. We already know that we are going to lose a lot of guys this summer. Ranieri can really get players, supporters and Moratti’s attention with this. Otherwise, I think that it’s an opportunity lost.

Okay, I am kind of sick of talking about stuff that I think needs to happen but I know it won’t. Ranieri won’t got out on a limb… anyone who has noticed his career before he turned 60 should pick up the fact that he’s a safety first, super conservative kind of coach. So, expect more vets to even out the depression of the team as it tries to get over our loss. I would get used to the 442 with a lot of defensive players clinging to the “Please god, don’t let them score on us these 90 minutes!!” strategy. It’s just a sinking feeling. *sigh* Where was my FM 2010 again… maybe under these special circumstances I should save up for a new one…

*Juan Jesus is going to join the Primavera in the Viareggio Tournament this month to get him acclimated with Italian football and ease a transition into the club and society. Joining him will be Rodrigo Alborno the winger that we got last winter who as far as I can tell we have transformed into an attacking fullback in the best Brazilian traditions, Lorenzo Crisetig the young man with whom Inter are betting so much of their future, Daniel Bessa likewise in a much more attacking midfielder sense, Samuele Longo a young forward prospect.

* Tottenham has voluntarily withdrawn from the Next Gen Series for breaking a rule of the tournament. Tottenham's exit leaves Liverpool to advance and face the winner of Ajax and Barcelona. Inter are already through and face the Marseille Babies.

*The Primavera have had a spikey last 2 games resulting in a loss and a draw (sound familiar?). This leaves them 3rd in their table, 2 points off first with the final four of the Next Gen Series to go and the Viareggio tournament still to play as well.

*We can only hope that this crop of youngsters is the most ready to participate on multiple fronts including European competitions that Inter has ever produced. Plus getting all this playing time has got to be a great advert for the club to young international prospects.

*To update the above: the youngsters in the Viareggio drew their game today with a piece of bad luck in the form of an 80th minute equalizer 1-1. Bessa set up the lone Inter score. I didn't see who actually scored.

1. Buy back Destro
2. Bring back Coutinho and Caldirola – I don’t care if Caldirola has “it” or not. I would rather have him as a back up than have to buy another player or keep one of The Fogeys around.
3. Buy back the half of Crisetig he exchanged for Obi
4. Promote more players as he did with Obi and Faraoni
5. Say goodbye to Cordoba, Chivu, Orlandoni, Stankovic, Zarate, Milito and Forlan – Milito shows us that he has something left… until the next time he gets the yips. But how long does he have it and how can we leave ourselves exposed when he unexpectedly loses it again.
6. Sell Maicon now when we still can get something for him
7. Mandate a formation change to a 433 that looks like an awful lot like a 4231 with the forwards and midfield in a >> shape with a player inside the carrot. This will ensure that we buy central midfielders, wide midfielders, attacking midfielders, wide attackers... that we are flexible and can have options if plan A doesn't work
8. Buy more high motor players who are willing to play on the outside AND inside like Guarin is rumored to be and like Obi and Faraoni can.
9. If you must spend insane amounts, spend on players who are technically classy – if we want to use gritty runners who can tackle then these last years of wasting money, benching and alienating Muntari have been truly stupid
10. The attack has to be built around Sneijder now, if he can be persuaded to get his head out of his ass. We can get along with decent strikers if we can feed them the damn ball
11. Lucio and Samuel get to play a biggish role for one more season. One. 1. That’s it. If they want to stay on after that, it’s on the bench for €1 mil per and a cushy seat
12. Zanetti becomes a utility player. He is no longer guaranteed a starting spot. He can sub in at midfield or defense as needed but as much as it pains me to say this, but he needs – and I need, dammit – to know that it’s not about him anymore. He’s not the type of player we need right now