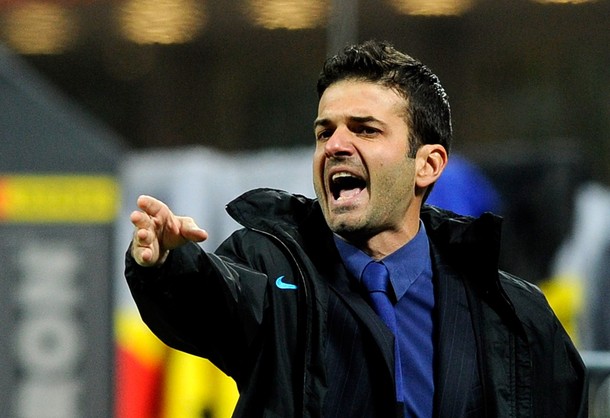 I really don’t want to make too much of this game other than this: we beat an opponent that we had no business losing to. Does that sound arrogant for a club that can’t seem to break out of seventh place? But Siena is a bad team. I know, I know they have the newest young Italian forward sensation that came from our youth program – again – but that was a bad team. And we suffered for that game more than we should have. On the other hand, we didn't fold after the first goal... so progress?

But let’s set the stage first.

In a major step back from the Genoa game, Inter looked a little uninterested and unmotivated whenever the game wasn’t in jeopardy. You know kind of how they looked under in the later days of Ranieri all the time. The difference here was that every time Cagliari scored there was a response. And Strama used a lot more young players – more on this later.

Inter, despite being in difficulty this season, constantly looked on the verge… of something. There was build up and build up but there wasn’t any closing of the deal. It was a frustrating game to watch, for that lack of conclusion to the build up and because Pinilla was just begging to be thrown out of that game – if it wasn’t the diving over and over, then it was chopping Deki in the neck, or scoring from an offside position, or it was lifting his shirt, or it was hanging from the partition between the supporters and the field. That’s one forward I can say that I am happy Inter kicked to the curb.

Anyway, the media frenzy about how disappointing the team looked was very interesting. Strama went from savior to ordinary human to pawn of older players. The 433 doesn’t work now. Strama is too naïve now whereas he must have been a wise old soul after the Genoa game.

Going into this midweek game there was no love for Inter in the media – as usual – and there was apparently no hope for the inconsistent Inter side. Of course, no one was accounting for the roller coaster year that every other side above and below us in the standings were having either… 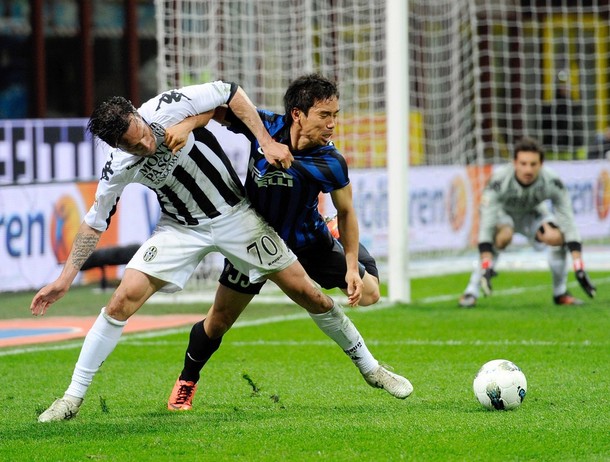 As with both the Genoa and Cagliari games, Inter tried to set the tone of the game by adventuring forward. Once again we were let down by a mistake in the back. Ranocchia was castigated this past weekend for “making a mistake” against Cagliari’s first goal. Looking back, Ranocchia picked up the right man who was making a run into his area, he was goal side of his man, but was just beaten by a good shot. Oh by the way, he was fine the rest of the game covering for both fullbacks at times. He just looked like he hadn’t played in a long time.

In contrast, yesterday Walter Samuel lost a routine back pass, Lucio was beaten on the ensuing pass and the resulting follies ended in a score against Inter. That mistake accounts in total the danger that Siena posed to the club. To put it another way, if it wasn’t for those two jamokes, Siena wouldn’t have gotten a goal as I don’t remember them coming really close after that.

Inter spent the rest of the game passing around and up and down the Siena half looking for an idea to attack from. Every once in a while we got the obligatory long range shot from Deki that thrilled to deceive.

Zarate who I have made light of on several occasions has been much better under Strama. Whether it’s been because he has gotten time at a position that he’s well suited for, or because he’s playing for his next job, I don’t know, but that’s the way I would bet. I wish that he could have figured it out before, though. Alvarez looked rusty, which is to be expected considering his 2 month layoff. However I will say this, the right side with his wheezy ass huffing and puffing looked better than the left side with Forlan. He’s still on the team… right? Obi looked very good and was only subbed off for an injury. The boos at his exit were uplifting. The Meazza crowd proved their intelligence at noting a good performance. Unlike the Cagliari crowd/moron president from the weekend who were calling our team thieves because they couldn’t understand why their forward wasn’t allowed to survive his 8th caution-able offence.

Chivu seemed to stop his hunt for a world record for cautions and play a subdued, disciplined game. Again, I think it’s because he’s looking for a new employer. I don’t doubt he’ll be back to his normal self as soon as he starts wearing a different shirt and gets a new contract.

Speaking of which – since the only reason Deki is playing is because he’s the only midfielder we have who can be a distributer of the ball, why isn’t there more noise by the club to get Montolivo? This would be his ideal position and unless I missed something, isn’t he out of contract this summer? Did he sign with someone already and I completely missed it?

Anyway, to wrap up this game, it was nice to see 1.) that we got at least one of the three possible penalties that could have been awarded to us given and 2.) Milito take confident, high penalties again, unlike those two abominations he took when the team was losing and my granny could have saved. He’s like a microwave – nuclear when he’s on, stone cold when he’s not and he’s been around a while.

Strama and the New/Old Guard 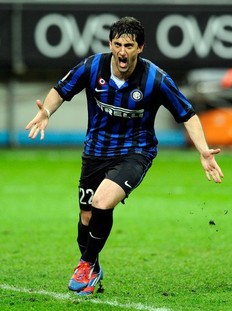 The Italian media were in backlash against the Strama phenomenon, these last three days, because the team had the nerve to draw a game that could have easily been a loss. Given the monstrously huge sample size of two games, the GdS came out with an article that had the average ages of the team under the three coaches this season. To what should be no one’s surprise, Strama’s team was the oldest. However, there was some contrived shock – if I read the article correctly – about this.

I have made it clear that I don’t like the Italian media very much, nor do I consider it to be at all reliable. In fact I read the media more for what motive an article could be about rather than its content. But I do consider the GdS to be the best of a very low bunch. Most of the time their wildly made up stories during the close season aren’t usually as far fetched nor is their blatant homerism as bad as many, many others. But in this case, they were going for pure sensationalism.

Yes, Strama’s two starting teams were, on average older. They were also more injured when he took over. He was also following a completely different family of tactics. Consider that since he’s taken over – as of the date of the article he had been in charge for 2 games – Guarin, Zarate, Poli and Obi had played in every game and Ranocchia and Pazzini were in one out of two. Keep in mind that Alvarez and Sneijder were injured and would have brought the average age down. Also keep in mind that Forlan, Castellazzi, Chivu and Cambiasso brought the average age up.

Much was made of Naga’s disappearance and Chivu’s reappearance in the line up, but a newspaper like GdS should be better than that. A 433 doesn’t rely on fullbacks to create attacking width or forward support as a 442 or its bastard cousin the 4312. In the 433, the fullbacks are mostly for defense first, the wide-ish midfielders for support/first line at halting the counter wide and the wide forwards are to create the width to stretch the opposition back line to make space for the striker. Yes, the fullbacks can overlap forward - like in the game against Siena where Siena were playing the dreaded 8-1-1 and there was noting happening wide or in Barcelona where the fullback is actually a winger – but the first basic rule for the fullback who isn’t absurdly talented like a Maicon or Alvarez in the 433 is to stay back first. This is basic stuff that the GdS should be able to rattle off like nothing and expect it’s readership to rattle off in a second instead of trying to put another Inter coaches pelt on its wall.

One might notice that given Siena’s turtle-like formation yesterday, Strama had no hesitation in letting slip the dogs to create as much havoc as possible.

I like what Strama is doing and I think his tactics and management are sound, modern football. A lot like what Mourinho did when he was in Italy and really shook things up. To me, it’s a bit of a relief to see some forward thinking around here, even if it’s only for a little while. That was just in case anyone was wondering where my own bias lay. Unlike any of the staid newspaper fogies or the dust-of-the-ages-covered pundits I have no problems with coaches trying out new ideas. I think Prandelli has the same thoughts I do. In their meeting a couple of days ago, Prandelli told Strama to keep to his ideas and to coach his way despite what others say or how long he might have at the Big Job.

I agree. We could use some new ideas around here.