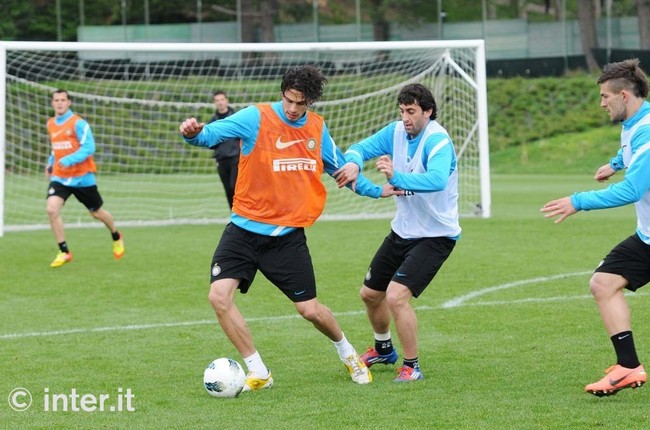 With six games left to the season all that I see in the internet rumors and the "newspapers" is speculation on what Inter will do this summer.

It’s been nearly impossible to speculate on anything else that will happen for the remainder of this season, of course. The 5 teams that are all fighting for that last Champions League spot (Lazio, Napoli, Roma, Udinese and Inter) have all been so inconsistent that it’s hard to figure what will happen from one week to the next with any of them.

In the last three games, Inter has banked 7 points. Roma has 6 points in the last 3 games. Lazio has 3. Udinese has 3. Napoli has 0. The difference between Inter (the farthest from 3rd but still considered in the running for that last Champions League spot) at 7th and Lazio at 3rd is 6 total points. Four teams in, one team out. It’s Thunderdome, live from Italy.

But the point here is that no one can tell what’s going to happen in the short term. But in the long term, there doesn’t seem to be any question that big changes are going to happen. Or are they? I was positive that there was going to be an overhaul of the team in the coming months. But right now, I am not so sure. Not because I personally don’t want big changes… nay-nay, I welcome them with this laurel and hardy handshake.

But I think that fear and outside pressure is going to do their nasty business on our beloved team again.

In three games in charge, Strama has gotten maximum points out of 2 – a minor miracle for us this season, I would say. The players are jazzed up and they look like they might be playing for their very livelihood. You know, kind of how they are supposed to all the time. But, more and more as time goes on a bit there is more talking in code. Stankovic has come out and said that he’s coming back next season. Cambiasso is making sure to mention how close he is with the captain. All the seniors are talking about how this is what they are really like, not those ghosts of 29 games previous. The bigwigs in charge are talking about how great everyone is again. Chivu’s agent is actually coming in next week for extension talks. Speculation has started up again on new coaches not named Stramaccioni – and it’s more or less the same names from last summer – minus Gasperini. It’s as though between then and now nothing has changed.

But something has changed. The supporters – you and me – have seen the truth about this team. We can’t be snow jobbed into the, “These guys are still great” line. We know its bullshit now. There were suspicions before. As much as we continue to love these players, we know what they are really like. And we know how a big job of replacing these players keeps getting bigger everytime it’s put off for another year, only to panic again every January.

It’s out there for everyone to see know. There’s no getting around it. And the competition is getting worse. I don’t know if anyone else has noticed, but the numbers for Milan’s financials have been leaked. The rumor is that they are running the same deficit this year as they were last season, a little less than €70 million. So what, you say? Well it means that when we go out to look for players, there is going to be another competitor with the same bankroll and cache that we have for that signature. Auctions don’t exist to drive prices down.

And new coaches don’t come into a team to not get more players. Don’t think that what happened to Benitez and Gasperini went unnoticed. Only Strama might come to the big chair and be happy with promoted youngsters, bargain basement acquisitions and the same mumbles and promises from this season. Anyone else is going to have a shopping list and expectations. Gasperini wasn’t supported. Benitez wasn’t supported. Did they make the best with what they had? No. But neither was a stranger. Everyone knows how Benitez runs his club. Everyone knows how Gasperini runs his team.

So that thought that things won’t change comes seeping in my brain pan. Strama won’t stay. Another coach will be brought in. He would be a big enough name to suit a team like Inter. He won’t have the nerve, having just arrived, to start making waves to the established roster. He would, of course require a type of player that we don’t have – wingers, anyone? He’ll need these players to fit into his designs and he won’t be flexible for the first year and kind of ease the team into his arcane system. He’ll be gone after one… maybe two months… if he’s lucky he’ll last half a year.

So, I am fearful of business as usual at the club the more “news” I read. They just won’t level with us. I just want them to tell us straight up what the plan is. “We are keeping Strama and getting rid of X, Y and Z”. “We are not keeping Strama and all the Oldies that fucked up this season for the supporters getting fat on their dressing room politics instead of playing hard and competing with each other for a job are all coming back.”

I don’t get why that’s such a hard thing to say. They don’t have to say it just the same way, of course. But at least I would know not to pay any attention next season until they grow the balls to change the team to what it needs to be.

There are also a lot of players who can play on the outside of the field – something that the team lack quite a bit – especially considering that Inter keep on getting linked up with coaches who play 442, 4231, 352 or 433 in rumors. None of the coaches Inter get linked to play 4312 or 41212.

But as usual there is a catch. In these hard Financial Fair Play times, you can’t just add in 5 players on the wings to the existing team. You kind of have to suit your whole team to play a certain way.

In other words, the front office has to grow a pair, make a decision and stick with it. Even if it doesn’t look like it’s not working at first. What is sometimes lost in all this is that when a coach is hired, you hire his system and when you hire his system then you are in the uncomfortable position of having to hire the players he needs to make it work. It’s unrealistic to expect the coach to change for the team – whether it should happen or not, it just doesn’t happen. So Inter can either hire a coach who will play the way the team is set up for or the team can change players to suit and support a coach.

The way the wind is blowing, it looks like management have decided to get a different breed of player this summer. I can only hope that this means that whomever Inter have decided to hire as coach, is going to be supported.