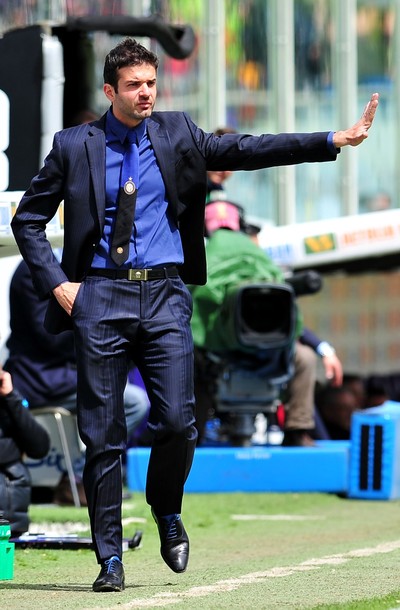 There was a lot not to like on this last weekend's match day in general – and here I am looking at Ibra’s antics against Bologna and the Genoa game in its whole. But Inter’s lackluster performance shouldn’t be forgotten... or maybe it should be forgotten just as quickly as possible.

There was more running then one remembers from the Ranieri debacle. There was Poli being able to stay on the field for a whole game which didn’t happen often enough under the Tinkerman for some unknowable reason. And there was the same inability to put the ball in a dangerous place where an attack could start – the willingness to turn hips and pass it back to the defense – the willingness to just not really push too hard. There were short spurts of gritted teeth determination to attack, but it was far too little and far too late.

There were a few obvious exceptions that proved the rule. Nagatomo, who came on at the half, made at least one spirited run into the Fiorentina penalty area for a near post shot. Poli opened my eyes with several strong challenges and a real willingness to move up and down the field at speed to attack or defend. I thought Maicon was one of the few who went consistently forward and tried to do something even though it looked like he picked up a slight foot injury – I haven’t heard that it was still bothering him. I thought Ricky Alvarez was the only “ball handler” of the group of him, Zarate and Forlan to actually try to bring the ball from the midfield to the attack and do something with it.

It would be hard not to mention Cesar right here between the good performances and the meh ones. On the one hand he stops a penalty. On the other, he made the foul that created the penalty. On yet the third hand, if Chivu and Lucio weren’t terrible, then he wouldn’t have had to make the foul in the first place. It’s a nasty cycle. By the way, of the Oldies only Cesar’s game has really made a consistent up-take since the Strama era. This is of course given a small sample size of four games.

Everyone else had a very meh day, but I am going to start with Cambiasso which bothered me a little. I like Cambiasso, but at some point – if he’s the man I always thought he was – he’s got to tell the coach that he just doesn’t have it that day. He was a ghost on the day, sitting in front of the defense. Considering that I already mentioned that the defense got itself carved up badly enough that the goalkeeper had to sacrifice a penalty to stop an attacker we can all tell how effective he was.

The combination of Lucio and Chivu was as effective as any other combination we have put back there. The difference is that there is no future with Chivu and Lucio. The continued lack of gametime does absolutely nothing for Ranocchia than fuel what I think is dumb transfer speculation. Like Tuttosport and Goal.com dumb – then again there have been some questionable moves by The Management these last couple years.

This brings us to the forwards. There were some real fundamental problems with the way we were deploying the front line. First of all, Strama said that he wanted to try and take advantage of the 3 man back line of Fiorentina by attacking the flanks. That only works if the threat posed by the flank attack spreads out the defense in the middle to make space for the striker. Well, Milito had no space in the middle. That right there should tell everyone how well this stratagem worked. Here’s the thing, I think that the plan was good. I think the personnel were… not good. I don’t think that Milito is a great lone striker. I think that Forlan has had a terrible time fitting in and settling into the club this season and his play has suffured for it all season long. And I think Zarate has been only moderately useful and only in the last 4 games at that. Here’s the thing, I think that Alvarez was the best “forward” on the day. Not that he was great, mind you. Ricky was short of wind and speed and the single shot he let loose was like a balloon that lost all its air and was dying pitifully and slowly.

Mathematically we aren’t out of the hunt for 3rd and the money that is associated with that spot is vital to the financial well being of the team buuuuuuuuuuut, I wonder if it wouldn’t be worth the stretch out of the big dance to revamp the team. Here’s the thing, if the team were to make the Champions League I think it would be less likely that the team would take risks with the roster. It’s still a dream of mine that the team stops slowly deflating like a macabre flan and inject some energy and hunger into it, so it might be worth it to start rooting for Lazio at this point.

It’s worth a sticky note to remind me to come back to this topic at a later date.