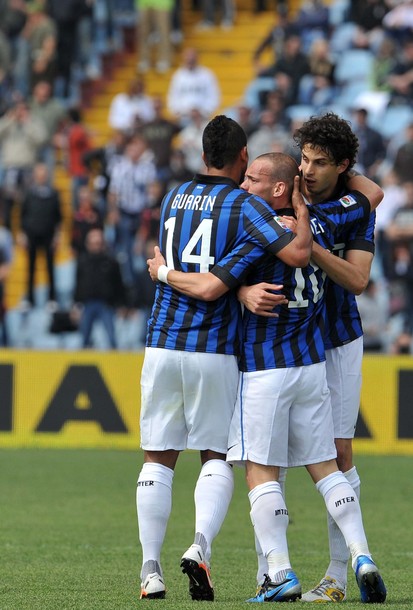 The number 3 is going to be incredibly important for these last few games. There are 3 points separating Inter from its goal of Champions League football. This build up to the end of the season still has 3 tough games left to it. Inter need to collect 3 points from as many games as it can. And of course, we are hunting for 3rd place. In many belief systems, the number three has a mystical, magical quality to it. But in this world of football, the number 3, since the 90s of course, is a secularly religious number. Especially if you are an Inter supporter and especially if you are living this season we are now.

You are going to hear this stat a lot in these next few days, but since Stramaccioni took over from Ranieri, Inter has collected 11 points in 5 games – 3 wins and 2 draws. The only teams that I can think of that are as hot are Parma (4 wins and 1 loss in the last 5) and Juventus (5 wins).

I did not watch the game – as my “screams” from the LiveBlog attest to – but I have read all the play by plays and game summaries and watched all the highlights. It seems like the Christmas tree worked for us, but more than that, the combination of personnel was both popular and efficient. Sneijder, Maicon, Nagatomo and Alvarez are all pretty adept at bringing the ball up field and with four of them doing so it seemed to catch Udinese off its guard in how to defend. Rightly, Udinese targeted Milito as the scoring threat – such as it is – and appeared to have doubled Milito whenever the ball came up the field leaving Sneijder open-ish to shooting and allowing Alvarez to sneak behind the Udinese (!) defense. The spacing for the top three elements of the Christmas tree seemed to be impeccable. There was room to spread the defense between the three attacking players so space was created in the area and there was room for Naga and Maicon to go forward.

The defense seems to be holding well. Most highlights and written accounts have nothing negative to say about Ranocchia and Nagatomo and the scores against in the Stramaccioni period have been pretty mild – remember that about half of the goals in the Genoa game were the result of penalties granted by the referee.

There’s a lot of weird excitement that is coming from the team as everyone is dreaming of going to Europe after absolutely everyone perhaps already wrote this team off. Hey, I did – and I am not sure I believe that they are going to make it to the Champions League.

But right now I am enjoying watching them win… something that was very hard for us to do not too long ago. But I really liked the team that was selected – I haven’t actually seen them play yet, but I like the idea that we have been able to put together a team that had some skill, some dynamism and some youth. Yeah, the defense is still a little creaky. Yeah, we have some trouble scoring from the forward position. There are issues. But I like the 2 supporting midfielders a little wide-ish working with the fullbacks.

I read that Guarin and Obi both had very impressive game working the midfield with energy and strength. I sure hope so. We could use some bangers around here again. I get sick of watching our guys Naga and Wes getting pushed around. These two with Poli give us something to push back with. Me likey.

And I read that young Ranocchia had a very decent game. I read that he misplaced some passes but that he was strong and smart. And really, that’s all I really want from my players. I understand that mistakes will happen. I understand that there is unbelievable pressure on these guys and I make allowances for this. All I ask for is effort and smarts. It sounds like he had some of both against a very good team. Kudos.

With 4 games left the race to 3rd is still up in the air. I’m not a real schedule guy, but just to peek really quickly: Inter comes home against Cesena, away to Parma, home to Milan and away to Lazio. Cesena is already relegated. Parma is right in the middle of the table, safe and they might be one step away from the beach – or they could try to act the spoilers. Milan is in the middle of a dog fight now – but who knows what will happen in 2 match days. And Lazio… it’s really too early to say. Anything can happen in 3 match days so who knows which team will still be in the fight. Current trends are that Inter is very hot right now. I couldn’t even think to predict a win/loss situation for these last 4 games. I will be tuning in on Sunday in the morning.