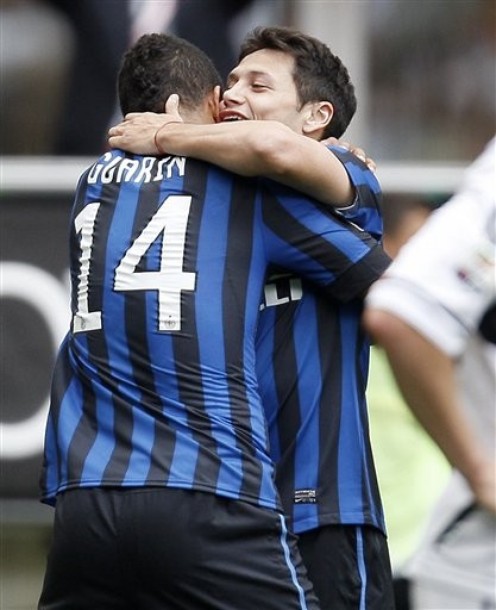 There was a lot to like about this game in general. Inter used a lot of young guys in the lineup. Stramaccioni managed to make the nay-sayers look foolish again. He even, somehow did the impossible by finding a way to play both Sneijder and Alvarez together on the field at the same time – a herculean task that the geniuses over at what is considered the leader in the wide world of sports thought nigh impossible.

But what I really liked was that a strong dynamic midfield that ran the field and covered both ends was able to shield the team from an anemic attack and a rickety central defense. This is exactly what a strong midfield is supposed to do. Last season, when we were up and down the table with Leonardo and everyone was going on about unbalanced this and that – our midfield was Cambiasso, Motta and Zanetti with Sneijder at the AM. Not dynamic. Not able to shield the defense. Not able to run the field all game long by a long sight.

This midfield three that turned the ball over a ton of times was able to give the attacking three players lots of chances to make plays. And they did that. They had chances. Not so much with the goals though.

Castellazzi didn’t have a lot to do. He had 2 or 3 shots come in that threatened the goal and one of them squeaked in. It wasn’t really his fault. It was a good shot and it took a deflection I’m told, which is always tricky. I didn’t actually see a deflection, but I wasn’t watching on the best of streams either.

Maicon is looking better and better as the season wears on – although I am trying to keep in mind that I am currently talking about his performance against an already relegated team. I didn’t see him against Udinese but I heard/read decent things. He was so injured this season and the Oldies have so underperformed it’s hard to know if he’ coming back to form from an injury or if he’s just starting to care because he’s angling for his job – which may or may not be here.

Lucio was decent today, but there is such a small sample size from the defensive standpoint. There was one time frame that he was annoyed that the ball wasn’t getting out of Inter’s end enough so he made like three runs forward to personally take the ball to the forwards. On the one hand I get the frustration, on the other… send a memo or something, okay? Plus, he took a wicked shot after a corner ricocheted around the goal mouth. If the keeper’s head wasn’t there that was on target.

Can I just put ditto marks here for Ranocchia. There wasn’t much for him to do but he did it reasonably well, I thought. It looked like he came close to a goal from a corner at one time, but on a day like today everyone seemed to come close to a goal. It was just an all around okay day for Froggy.

Every time I see Naga and Obi on the same side of the field I know that I am going to get a show and today was no different. I thought Naga looked really up to play his old team. I read that the goal against us was a ricochet off his leg and if that’s the case I think it’s a shame. He had what otherwise could be called probably his best defensive game thus far – keep in mind we are talking about a relegated team here.

I loved Guarin today. I don’t think that he made it all the way to 90 yet – he was huffing around 60 or 70, but he played those 60 or 70 very well I thought. Scanning other Inter sites I think it’s safe to say that I am not alone in this. I was pretty impressed.

I hate to keep saying this but against this already relegated team Cambiasso looked very good as well. He screened the back four and did a good job of keeping behind the ball, of not getting sucked too far up the field while in possession so that he couldn’t come back.

During the LiveBlog at halftime, I mentioned that Obi was an absolute beast today and he did nothing to make me change my mind at the end of the game. At times he was in the back 4 area. At times he was setting up either Naga or Sneijder on the left. At times he was actually shooting and scoring, although I think that officially it’s an own goal against Cesena. He was such a good player that I think he really deserved the goal.

For the second game in a row, Sneijder played on of those twisty, running at the defense games that we all want to see more of from him. Once again, he was playing Cesena but is it so hard to think that he’s on the way back, a little later than it could have been, but back nonetheless? There are some concerns though. Some people say that he’s only playing well now because he wants to get onto the Dutch Euro team or because this is the summer that BS.com finally gets it right and he’s on the move to England. I don’t know about the other stuff, but it’s a far cry from his performances earlier this calendar year, that’s for sure.

Slick Ric continues to play well this season when given a chance. Here’s the long and the short of it – he’s got a beauty of a pass and a sneaky dribble. When he has the position and the space to use them, he’s good. Plus he could have easily gotten a penalty after he wrong footed a Cesena defender. There has been a lot of speculation about Ricky for this summer as well, but I am less inclined to believe any of it. I can see rumors for Maicon and Wes because they are worth a lot of money. Slick Rick isn’t, so even if Inter wanted to sell him he probably wouldn’t be worth his purchase price at this point. Also, there is a nasty thing in the English media, I don’t remember where I saw it, but there’s this whole thing about this being a bust year for Ricky A. Has it been? I thought he did very well when finally given a chance by Ranieri in November - December before he got hurt in January - ish. I think he did well today and by all accounts he did well against Udinese. Considering that young men from S. America usually need 6 months to a year to adapt to changing their entire lives… I thought Ricky is doing fine.

-However I could be completely wrong on that.

All this brings me to Pazzini. I thought Pazzo had a terrible game today, but I am not ready to write him off yet. First, no one will buy him, I don’t believe. Yeah, I know there are rumors, but I don’t buy them. Secondly, I stood by Milito when the poor bastard couldn’t hit the side of a barn. I am not going to abandon someone who is much younger with a chance to be even better in the future. Pazzo’s form will come back, but it really wasn’t there today. The little tap ins that are his bread and butter just weren’t falling for him. And when they don’t fall, they just don’t fall. There’s nothing to do about it.

As I said earlier, I liked the way Inter were able to use the awesome energy of the midfield to cover the deficiencies of the other 2 parts of the team. Moratti and Branca are, despite the names used to describe them lately, smart guys. I hope the lesson in how the team played – and who played well - isn’t lost on them. By my count Inter had only 4 players in the starting 11 over 30: Castellazzi, Maicon, Lucio and Cambiasso. I think that’s a season low. I wonder if GdS will write an article on how young this team was…

Here’s another thought, how do we feel about the team’s speed and physicality without JZ4? If he were to only become a spot starter are we okay with that or is it too soon to contemplate it?

If the teams wants 3rd place then they are going to need to win out. Napoli owns all the tie breakers with the team, but the way things are going this season anyone can drop points anywhere against anyone. Lazio look like they are deflating and Udinese is just as up and down as we have been this season, although the way they played against Lazio today, I wouldn’t be surprised to hear that their president sweetened the kitty on 3rd. Going to the Champions League would be huge for Udinese – the prize money just for participating is probably their payroll for a year at least. I doubt that they would make the group stage, but they would still make a mess of cash, and that’s the whole point of the CL really, in my opinion. 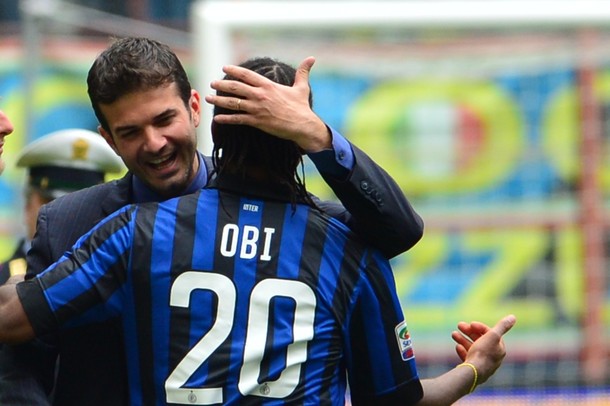