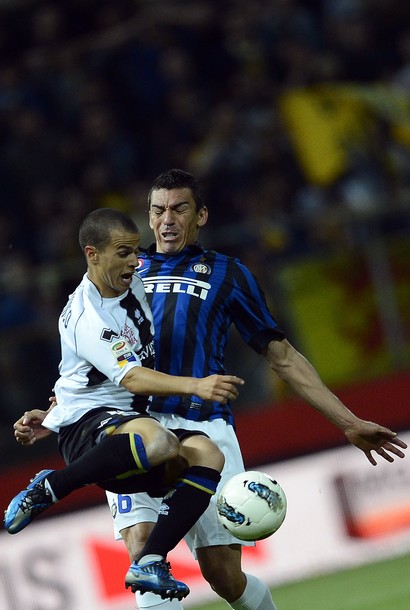 There’s a lot of subtext that goes with this game, but there’s also not. The game was lost when the team made a mistake in the defensive third and then couldn’t recover to stem the tide. But in a broader sense a game like this was going to be lost because of a basic, fundamental problem that has not been fixed – there has been no reinforcement of the defense since Mourinho was in charge. Samuel, Lucio, Materazzi, Cordoba and Chivu were the defensive core nearly 3 years ago, and it was considered old then.

Ranocchia was added last winter and played a lot – last winter and spring, you know, when climbed 5 places in the table to finish 2nd. This season, for some reason – maybe it was the coaching chaos, maybe it was an edict from on high, maybe it was Italian coaching myopia and job insecurity, but there wasn’t any time for Ranocchia. I know some will say that he didn’t play very well at times. Well, that’s why young players need more time, not less, to get better. Mistakes as we all should have learned yesterday are going to happen anyway. Lucio won’t learn from his mistakes. It’s too late for him. But Ranocchia can. We need to give him more work and he needs to be the man that takes over sooner rather than later. And people need to cut him some slack when he screws up.

I know there are some who are going to tell me that we need to win now. Yeah, okay, I can get on board with that to a point – and this is that subtext that I was talking about in the opening paragraph – there comes a point, to my mind, where wining now and satisfying that immediacy, that instant gratification that all fanatics crave can be detrimental to the long term health of the club.

We need to win now, people tell me. Yeah, okay, I like winning, but I also like winning next season and the season after that too, though. Yeah, the team on the field can only win those games that are immediately in front of them, but the management of the team can cripple a team for several years.

At some point there needs to be a balance between administration and performance but this team hasn’t found it yet. At some point the team needs to either raise the income level – and we have discussed this over and over again – or it needs to cut anchor on the players that are weighing it down. Income level isn’t going to rise anytime soon with no Champions League folks. It just isn’t going to happen. We can keep kidding ourselves and say that 30++ year old midfielders whose tank runs dry after 60 minutes are going to help or we can face reality – 30++ year old midfielders with no staying power and limited defensive ability at the best of times shouldn’t be in the game unless the team is losing and shouldn’t be on a team that is already too full of 30++ year olds. I like the guy personally, but it’s a shame that we all get old.

We can keep kidding ourselves and change coaches over and over and over and over and over again and keep the cycle going over and over at the first sign of trouble or we can pick someone with a coherent plan to begin with and stay with that guy for the term. Gasperini got around 1 game on these boards. Did I like the guy? No. Did I like his hiring? No. Did I like his style of play? No. He was a poor hire and whomever’s choice he was should hang his head in shame for the decision. But, he should have gotten a fair shot. Ranieri got more than a fair shot, and he was mediocre at best. Another poor hire. Ranieri looks all used up and has for several years now. But he got nearly a whole season. Did he do so much better than Gasperini? He hid the problems better, probably. But we still saw them; we still knew that they were there.

Stramaccioni will probably be asked to go back to the Primavera. It will be a shame, because the team needs to get younger and he’s a guy that seems to use and prepare the young guys well. You know kind of what we really could use around here. But I don’t believe that the team will try very hard to get younger. I don’t believe that the team will leave him in charge. I think the team will go for a big name that will massage the egos of the Oldies and use the young players with the same eyedropper that Ranieri did. It’s a shame because Obi, Poli and Guarin playing together seem like a whirlwind of chaos and trouble that could be unleashed on Serie A.

It’s a personal shame that the youth that gave – I don’t want to speak for anyone else – me such hope for the season will be sold off to make the accounts balance and fund this summer’s further attempts at extremism. Inter now have 4 goalkeepers between the age of 33 and18 that other teams would pay for. Inter have declared that they have already received offers for several of the attacking players like Longo and Bessa. It’s been estimated that Inter have some 20+ to 30+ millions in assets of the Primavera alone. Will Inter sell those that can bring the most just to make ends meet?

I think that many will be sold. I have said it before and I already have an article to post somewhere – depending on the future of these blogs - that Inter’s problem isn’t players or directors of sport or ownership. It’s income. Plain and simple, it’s income. And if you have been reading here for any length of time I have pointed this out over and over. Inter needs income to compete otherwise we are treading water until the whirlpool takes us down. Inter make slightly less, relatively speaking, income than Liverpool (we consistently fall in the 10ish range over the last several years in income), according to some more or less reliable money lists. Inter spend 8 places higher on salaries than Liverpool according to other more or less reliable lists. We make slightly less, but we spend a whole lot more. This is not a recipe for good economic health.

I am not going to get into the debate about whether we are a better team than Liverpool, because then I would have to actually watch Liverpool play and that’s just not going to happen. What I will speculate on though, is that Inter and Liverpool will both miss the Champions League. Inter and Liverpool will both miss the league title. The table position might or might not be different but we could have been in the same practical predicament as Liverpool, but spent much less, got the books in proper order and blood the young guns. If we still need players after that, at least we will know WHICH positions we need to fortify (hopefully the answer would be different than what it is now: All of them!). But the point is that we will have been building for something – financial well being and experienced players with young, non-broken down bodies.

Right now, we have neither. How’s it feel? Secure? Hopeful? Right. Me neither.

But on the other hand, if this were my team, this would be the time that I start the building blocks of a new project. Why not now? I don’t want to get into who I would bring in and who I would let go, there are still two games this season and I would like to kind of sort of focus on those while I can before the wasteland of summer with no games is upon me.

But I realize that this isn’t a nuts and bolts game review… mostly because as I was watching Parma run and weave around us I couldn’t help thinking that this game was lost this past summer. The team looks old. As long as Inter dictated play, as it did in the first half, Parma was useless, as they were in the first half. But we opened the door with a mistake and the faults of last summer slammed it shut on us. We couldn’t recover. Recovery is for young people, outraged that things got to the point that they did and furious anger spurs action. We tried to make it up. We tried to come back – and I love those guys for it – but the body wasn’t willing to follow the mind anymore. After three chances the needle went to empty.