Inter v Roma: Starting the Season Off With A Bang

Share All sharing options for: Inter v Roma: Starting the Season Off With A Bang

This fixture always makes me sweat. It doesn't matter where Roma is on the table, what sort of squad they field, or who their coach is (or ours, for that matter), this tie is always trouble. Some how, some way, Roma always bring it to the Meazza. There is very little love lost between the two fan bases and whenever Inter and Roma meet it is a hotly contested affair. It often feels like rocks and hard places meeting to kick eachother around for 90 minutes. Three of our last four Serie A meetings there have finished in draws (the exception was that crazy 5-3 game under Leonardo) and four out of the last seven has had a penalty awarded. On the up side, this will be a great introduction to the Serie A for all the new guys on the squad.

Aside from the animosity and Roma's inferiority complex (brought about by all those years of finishing second to Inter), this game has all the behind the scenes drama we've come to expect from the Serie A. Stramaccione is a Roman native and began his coaching career with Roma in their youth system. He, as he is a stand-up classy guy, has nothing but good things to say about his time at Trigoria and for the club who gave him his start in coaching. On Roma's side, there is Matteo Destro, an Inter youth product who has been tapped for great things since he was about 15. He left Inter in the deal that brought us Milito and Motta from Genoa. Siena bought half his ticket last season and he had a great year with them. Inter tried desperately to get him back but Siena hijacked the deal by bidding huge when his ticket went to envelopes. They knew he was money. Besides, Destro had shown an interest in going to Roma specifically so he could work with Zeman (who is known for being a striker's coach). I say, curse you Siena for taking our boy away but good luck Destro. Well, not too much luck. Not Sunday, anyway.

How to Watch: RAI International here in the US (outside US channels here) or you can find a stream (try here)
Liveblog: You bet your sweet bippy! If Kirby doesn't run it, I will. Whatever the case we will liveblog the crap out of this game. Check back here 15 minutes before kickoff.

A QUICK LOOK BACK

This tie also came early last season, I think it was matchday 3 or something. It was a special occasion for Javier Zanetti as he made his 756th appearance in a Nerarazzurri shirt and equalled Giuseppe Bergomi's record. The game, though, was not so special. It finished 0-0 after lackluster performances from just about everyone, with the possible exception of Sneijder and my lovely Julio Cesar (who is practically perfect, as we all know). Anyway, I blame Gasparini. He was just not right for Inter and none of the players seemed to have the first clue what they were supposed to do. That particular problem has been fixed now so I have much higher hopes for this game.

I cant image why anyone would want to watch this, but to each his own. Highlights (used loosely):

I dont think anyone would call Roma's last season a success. They finished two points behind Inter and out of Europe all together. As such, both clubs have seen a lot of change over the summer. By my count, Roma shifted 18 players and brought in 16 along with a new coach. It was an almost total overhaul. And they picked up some pretty good players like Balzaretti from Palermo and Destro from Siena. When you add the new guys in with the key players they retained (De Rossi and Osvaldo) the team begins to resemble something that can cause some difficulty for us. Especially De Rossi. I dont know if this is still true, but as of this time last year Daniele De Rossi has scored more goals in competitive fixtures against Inter than against any other team in his professional career. And I remember each and every one of them.

Of course, they still have some questions in defense (would they be Roma if they didn't?) as you just never know when Nico Burdisso will totally lose his marbles. If we are to believe the pundits, it is this weakness in defense that may pose the most issues for Roma (and provide Inter an opening). Their new coach, Zeman, is known for an attacking style of play with a high line of defense. I think the idea is sure, you may give up three goals but if you score four then no problem. Three points and home for oranges and bonuses.

Roma's opening game (last week) was against Catania. The game finished 2-2 and with Roma going down twice to finally get the draw in overtime. So, as to Zeman's system, they managed to get the goals, just not more than the opposition. They have had another week to work out the kinks, though, so things may be a little tighter at the back on Sunday. Bradly must have picked up a knock in that game as he is out injured (along with Dodo and Perrotta) for this week.

Stramaccioni has called 21 players to take on the dreaded Roma:

Strama has decided not to rush Handanovic back from injury. He has not fully recovered so it was decided it was best not to risk him. Maybe this isn't so terrible as it initially sounds as Castellazzi will absolutely not want a repeat of Thursday. Added to Handanovic is the MASSIVE list of the injured: Chivu, Stankovic, Alvarez, Obi, Mariga, and Mudingayi. On the up side, many of them are looking to be available for the third matchday. This international break will come at just the right time for many. Mariga is the exception. Dont even think about seeing him until at least October.

We are just coming off a grueling 10-man fightback on Thrusday. People are going to be a bit tired. Luckily, Strama thought of this and did a bit of rotation. Silvestre and Ranocchia should be good to go, as will Sneijder, Miltio, and Gargano. As it happens, even Castellazzi got a bit of a sit down. Of course, our participation in the EL could help us as well has hinder. We have had an extra month of training and played four more competative games than Roma.

Pereira could make his Inter debut, although he may not start. Inter v Roma is a hell of a game to cut your Serie A teeth on. There is something to be said for trials by fire as well, though. If Pereira can take on Roma now and do well then Torino (our next opponant) should be no problem.

So, that means we may see a little something like:

With Coutinho and Cassano on the bench.

And I think that can work. My only real concern is our defense. Ranocchia and Silvestre are doing ok, but they haven't really had the time to build the rapport that really great centerback pairings have. I dont think Samuel is quite fit for this game (at least, that is how I am rationalizing his performance on Thursday). Roma is going to play on our the shoulders of our defense. If they dont have the discipline to keep their line (Silvestre, you know who I am talking to) the Casta will be one flappy handed challenge from another red card. I just hope the boys are watching lots of film tonight. I dont want anyone to be caught unawares.

As a recap, this game has the potential to be a goal-scoring, defenseless thrill-fest finishing somewhere around 4-3. My only issue is, I am not at all convinced, yet, that my team will be the one ending in four. Things are looking up: all three of our away games have been definitive wins with multiple goals and sheets as white as snow. It is at the San Siro where things seem to fall apart. I dont know if it is the added pressure of the home fans or complacency but we simply must snap out of it. I desperately want a win on Sunday. A clean sheet as well would be pure icing, but I am willing to settle for clear defensive organization and at two-goal margin. Especially now that Pazzini just got a hat-trick for Milan (facepalm)

Now, if I didn't have to watch the whole thing on some crappy tiny stream. Curse you BeIN Sports and your Qatari petrodollars!

The obligatory new player with shirt photo. Welcome aboard, Pereira. 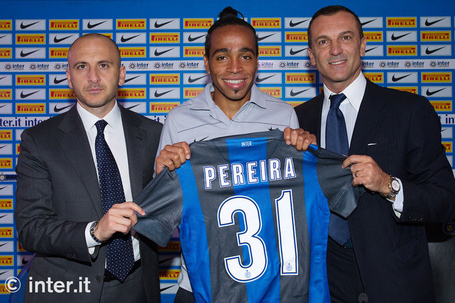