It is that first pesky international break of the season and La Gazzetta dello Sport celebrates every year by publishing a list of the wages of every Serie A player by team. Hooray! Predictably, this year Inter cut their wage bill by about 45 million euro. This year, as last, Wesely Sneijder is our top earner at 6 million a season. Our lowest earner still makes 200,000 euro, but this year, that player is Livaja.

If you want to see how the wages paid to Inter players compares to those from other teams, a nice Milan fan has posted all the tables in a fanshot.

Before you ask, I haven't read this year's article (and I dont remember the ones from years past) so I dont know how they have decided on these figures. My gut tells me that these are the base wages and do not include any bonuses. Given that, this bill could well go up if the team (or a particular player) does extremely well. It is also my gut feeling that the percentage of a player's wages that these bonuses comprise are growing. That is, wages are going down but bonuses are going up. In the end, the player is likely to make the same amount of money but it looks as if they took a cut. At least, that is what the cynical side thinks. On the other hand, these bonuses are often performance based (like in Cassano, he gets more money if he makes more assists) and dont kick in until a certain threshold is met, so this restructuring may just be a good way to ensure the club gets what it is paying for.

Some quick statistics (in euros, of course):

For you non-statistically minded people, the fact that the mean (average) and median (middle value) are close means that the wages are relatively evenly distributed across the squad. If the mean was quite a bit higher than the median, that would suggest that most of the budget was going to pay a couple highly-paid players. If, for instance, if we threw a big-bucks player like Ibra and his 10 million into the mix, the average would jump to 2.1 but the median would only move to 1.8 million.

Alright, I can see your eyes glazing over from here. I will move on.

La Gazzetta dello Sport also provided the total wages bill for the season. This year it is 100 million for Inter. Of course, if you add the wages in the list, you only get to 47.5 million. That means that only roughly half of the wages budget gets spent on players. The rest, presumably, goes to the scores of therapist, doctors, coaches, trainers, groundskeepers, cooks, cleaners, and sundry other club employees. A 50/50 split seems reasonable to me - although I dont really have anything to compare it to (anyone?).

Inter and Serie A

In terms of total wage bills, Inter is still in the top 4 (highest earner and wages in millions of euros shown as well):

And, basically, Juve and Milan are getting what they pay for. They finished top two last season. Roma and Inter, not so much. In terms of table finish for your euro, Udinese and Napoli are the clubs to look at. Napoli has a total wage bill of 53.2 . Only seven of their players make more than 1 million euro a season yet they have finished in the top six for the last three years. Udinese is even better: their total wages bill is only 21.2 million and only Di Natale makes more than a million (1.3) yet they had a champions league playoff spot this season. That Money Ball guy would love Udinese.

This Year Compared to Previous Seasons

Generally speaking, Inter has been working on cutting its wage bill for the last few seasons. The 2011-2012 season was disastrous not only for Inter's piss-poor season, but in that we were paying almost as much as the year we won the treble (2009-2010) and finished in 6th place (shudder). The word Craptacular comes to mind. Anyway, this year puts us back in the right direct, down. Well, that is, if the club wants to actually meet UEFA's Financial Fair Play rules, that is. We really need that stadium! 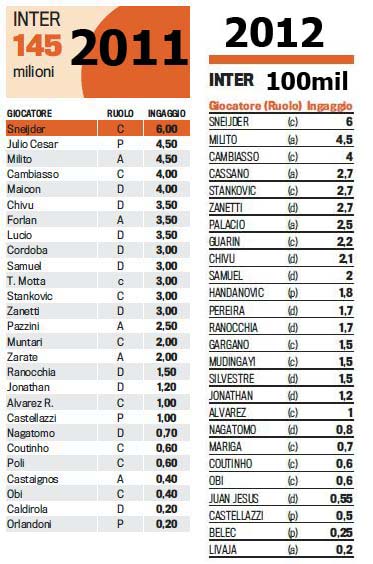 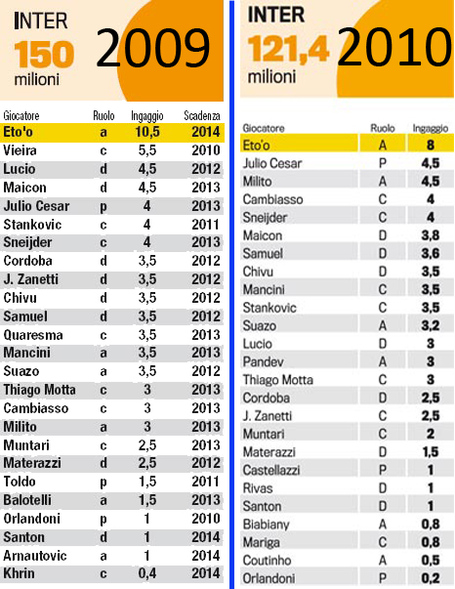 I will leave the rest of the picking apart and analysis to you all. I am itching to do some comparative graphing for these four years but I sort of think that would make most of you run screaming for the hills. We can quickly see that the 45 million in savings between last year and this came from offloading many high-wage earners. Plus, many of the guys who stuck around have wages that automatically step down as they get older. In the end, it feels like the club as a whole took one giant step forward towards fiscal stability. We will have to wait until May to really evaluate if this leaner Inter is in fact meaner, but I will say that it certainly feels less bloated.