This week, Inter travel north to take on the original Red Bulls, Torino FC. Inter are hoping to bounce back from the 1-3 home loss to Roma last match day and show they really are in the hunt for glory this season. It should be an interesting match-up: Torino has won their last seven home games while Inter hasn't lost away to Torino since 1994 (that makes eight wins for those who count). Plus, we have a perfect away record so far. Certainly, a win for Inter is not out of the question and the three points (and confidence) would be welcome.

Who: Torino v Inter
What: Serie A Matchday 3
Where: Stadio Olimpico in Turin
When: Sunday, 8:45pm local time (11:45am pacific, 2:45 pm eastern)
How to Watch: Live on BeIN Sport and RAI International in the US (other countries check here) or find a stream (Wizywig, Roja)

Inter hasn't travel to Torino since 2008. Funnily enough, it was also matchday 3. Anyway, Inter won that match handily, 1-3 with goals from Mancini, Maicon, and Ibra. Highlights:

Historically, Torino has a very good home record against Inter, although they haven't beaten us since 1994: 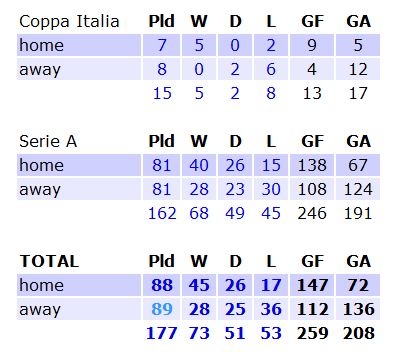 I couldn't be bothered to type in the stats. Sue me.

I will admit, I haven't really had time to do the research on teams that I like to do for these sorts of things. I know they (like us) have had far too many coaches per year recently, but have finally settled down with Ventura. They did well to come up last year, and Ventura used the summer transfer season to bring players he knows and has already experienced success with (like Gillet) to the club. They are doing reasonably well so far, with a 3-0 win against Pescara last matchday and 0-0 draw against Siena on opening day. Ventura prefers a 4-2-4, a system of attacking football with many players committed up front and a lot of speed. The very thing that seems to flummox Inter's defense (well, let's be real, everything seems to flummox Inter's defense this season).

Keep an eye on Alen Stevanovic. He is a midfielder originally brought to Inter by Mourinho in 2009. He trained with the club for a while, played a couple friendlies, and finally made his Inter debut against Siena in 2010. He went to Torino on a co-ownership deal that summer and even spent a few months on loan to MLS side Toronto FC. He is back now at Toro and still half-owned by Inter.

Also keep an eye on center back Angelo Ogbonna. He is a rising young defender and the only Serie B player Prandelli brought to the Euros with the NT. He has played both of Toro's last two games (both clean sheets) and in Italy's 2-2 draw against Bulgaria. Word is that Man U will have scouts checking him out at this game. He will be a formidable opponent on Sunday.

Even with the international break, Inter are still struggling with injuries. Handanovic and Alvarez have returned but Chivu, Stankovic, Obi, Mariga, and Mudingayi are all still out. So, that leaves 23 players for Strama to call up:

But that isn't the whole story. Palacio had a bit of knock on international duty and may not be 100% while Guarin was sick over the break. In any event, the starting team tomorrow will likely be the same as started last week against Roma with the exception of Handa in goal and maybe Samuel instead of Silvestre. So...

And boy, howdy, I just dont know how I feel about that. It seems like the squad has all sorts of potential but it also seems like there is a terrifying lack of defensive acumen and the never-say-die attitude I have associated with the club in previous years. What do you say to a squad who collectively shuts down and goes to their happy place after going down a goal? Strama agrees, saying:

"One thing I never want to see again is the way we switched off after their second goal. That's something I will not accept, a team like ours must not do things like that. It might happen unintentionally, but we just left the pitch. We've realised that now. It hurts but we'll move on and provide our answers on the pitch."

I understand that Inter has this need to make us all suffer with them. I understand that they seem to be fated to make us all nuts with crazy 4-3 scorelines and losing 0-2 to no-name Eastern European teams at home. I get it. I would just like this team to reclaim a bit of the old grinta we used to show. I suppose that comes from belief in the project and trust in your teammates. Usually, this takes time - something the Serie A provides very little of. A win tomorrow would be a good way to bounce back from Roma and would demonstrate to us fans and the team themselves that they can win. It would certainly help me feel better about this grand experiment. 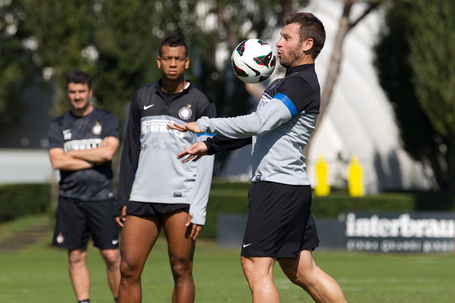