Okay, so another win away from home cooking and like every other game, both win and loss, we learn something new about this team. If I had a dime and the inclination I would have bet on Inter to win this game. Not because I don't think Torino is a good team. On the contrary, I thought that this would be a very close game. No, I would have put money on an Inter win because I have an inkling that the players on this team would love to shut the mouths of those over-reactors and doomsayers left over from the Roma game who picked apart and criticized every little thing - both of their own supporters and those pundits who had already dug their grave.

This team is going to have plenty of terrible moments on their own just from going through the normal ups and downs a young football team goes through trying to mature in a media spotlight as big as a team like Inter is likely to attract. There's no need to manufacture imaginary ones during an international break when the team isn't even playing. And there in a nutshell is basically why I make myself more or less scarce during a break like this. I hate borrowing trouble from the future. Mostly, I have no trouble finding it when it comes of it's own accord.

Handanovic: Welcome back Mr. Kot-ter! He had to clean up 2 shots and an ugly pass back and he was able to do it with aplomb. I felt safe and secure with him back there, and really isn't that all that really matters? 8.0

Nagatomo: It was a very up and down game for the young Japanese player. He made 2 bone head plays, got a stupid yellow and made 2 really good plays. I can almost forgive the yellow since a Torino player did the same thing on the other side and wasn't carded. Almost. Kudos for being able to switch positions when needed without crying about it. 6.0

Juan: Juan showed speed, strength and a viciousness on the tackle that I really admire in a defensive player. He had almost a perfect game if it wasn't for a very questionable caution. Now he has to do it again. 8.0

Ranocchia: Another excellent game for the young Master Frog. Like Juan he showed speed and strength, but he was more exact... more technical in his tackles. They make a nice compliment to each other. 8.0

Jonathan: This is the type of game that I would expect more of Jon, but I just didn't get it. I wasn't thrilled. I thought that his removal added to the game. Not a good sign. 5.5

Zanetti: Not a great game for Zanetti but a player who can play on the outside was needed and he was called. Strama wanted to throttle the Torino wings and mission accomplished. 6.5

Cambiasso: Dropping Cuchu into the middle of the defense when on the attack was inspired. His running was limited so he could save energy and he was never caught too far up on the counter - a habitual problem with him these days. Also he added a third passing option on those series of events that Inter tried to lure the Torino defense to come out of its shell. Cuchu is at an age and ability for positional play only - this game was tailored for it. 6.5

Guarin: Not a great day for Freddy. I don't recall if he was called up with the Colombian National team, but there was something not quite right. He never been a surgical passer, but it wasn't clicking for him yesterday. 6.0

Pereira: I thought it was a decent day for Pereira. He has such excellent range of effectiveness that it's hard for other teams to deal with him. Plus he was able to switch up positions on the fly to accommodate the coaches desires. 6.5

Sneijder: Unlike many others, I thought Sneijder did a decent job yesterday in a position that he's not well suited for. I thought that he was very unlucky to score on his well taken free kick also. I think the international break was telling on him. 6.5

Milito: What a great day for Milito to show his worth. Milito had a big hand in both goals and stayed in the game despite being left alone and isolated up top for much of the game. The dummy was class. 8.0

Strama: I have no issue with any of his choices before or during the game. I thought the plan was smart, a little cautious but well thought out. As I have said before, I am on board with the plan... any plan, as long as there is one. There was definitely a plan here and I thought it was very sensible - more on this later. I liked the subs and the switch in formation late in the game announced that we weren't sitting on the 0-1 lead and was much needed to alleviate defensive pressure. As a bonus, his remarks after the game were brilliant.

As near as I can tell there were 3 directives for yesterday:

1. Don't get caught too far forward

It's well known that Torino play the 424 - for those who don't know what that is, think 442 but with the 2 outside midfielders with orders to either attack the corner flags to then drop bombs to the central attacking pair or to play killer diagonal through balls for the central pair to run on to. All of this is done on at speed on the counter so Torino needs to defend like crazy in their own end to force a turnover and get Inter's defenders to run towards their own goal. Speed is essential since all this relies on defenders being under enough pressure to make mistakes that the forwards can take advantage of.

So lets look at the directives again. Directive 1 is pretty cut and dried. The counterattack works because a team can have less individual talent but be in better position to score - so don't be in poor position. That seems smart enough. Also, taking a quick trip down memory lane to last season, I seem to remember a team that couldn't defend the counterattack starting in September and lasting until... the end of the season really.

So did we stay in good position? Absolutely. There were no - i repeat, no - incidents of Handanovic being put in a 1v1 position. Every foray into our penalty area was contested. In fact I was impressed at how positionally sound the defense was considering the relative youth of the centerbacks but also the inclusion of Cambiasso who's presence guaranteed that Inter wouldn't be caught out manned or in bad position. I was thoroughly impressed.

Let's look at directive 2. Restricting the amount of time, and therefore chances that Torino had to implement counterattacks by definition restricts their ability to hurt us with it. Plus, we theoretically take advantage of our better personnel to score, which we did.

Did we have the majority of possession? Yep, 61% to 39%. Did we take advantage of that time? Yep 2 goals. Did that possession restrict their attempts at our goal? Nope, they took 11 shots at our goal - only 3 on target.

Directive 3 was, I think, a result in part of the Roma game. All the goals from the Roma game came through the right flank and I think Strama wanted to be stronger there suspecting that others might play copy cat. Additionally, strangling the wings in this game carries the added on bonus of taking at least half of Torino's firepower out of the game before it started. A quick re-watching of the game shows that there was one single cross that looked remotely dangerous. The resulting header was contested enough to go wide. All the rest of Torino's attacks came as through balls and were all contested.

At the beginning of this season I said that I could put up with a lot of heartache this season if I saw some measure of progress. Progress continues to be my theme for this season, in fact. Do I see progress 3 league games in? I most certainly do. The counter attack was the kiss of death for us last season as we had neither the coaches nor the personnel to deal with it and so far we are dealing with it just fine considering the Pescara and Torino games.

There are those who would say, "Well, yeah but we should be beating these just promoted teams anyway right?" Also there are those skeptics in the media who say that we were playing a provincial game. And my answer is in the section above - there is a reason why I took such a methodical view of our tactics. It's not provincial, or weak, to play a basic, tried and true game plan against a team that you know is going to do nothing but try to counterattack you all day long. It's smart. Planning for your opponent isn't provincial or weak. It's how to win games. Right now, with this plan working so well and everyone buying in, it's also building trust between the team themselves and the team and the young coach.

One last point and then I'll end the boredom: 0-1-2. Zero wins, a draw and two losses. Seven goals against, four goals in favor. Do these numbers seem familiar? They should. These are the vital stats of this team at this point last year. This season: 2-0-1, 6 goals in favor, 3 against. It was November 19, 2011 when we surpassed the 6 point mark and that included a 3-1 thrashing at the hands of newly promoted Novara. Wanna tell me again how we shouldn't be playing teams like Torino in a smart and methodical manner that makes sure of the result.

Having said all that, one swallow doesn't a summer make. There are plenty of tests that await to see if we are in a tropical heat wave or the winter of my discontent... 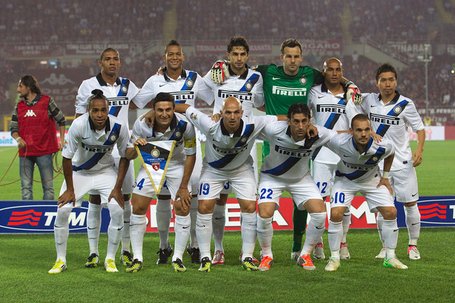