The schedule gets compressed a bit from here until the foreseeable future but there is always something to talk about...

Deki is going to miss more time as his Achilles continues to give him problems. The rumors are suggesting another month on the shelf. I think Deki could have retired this summer to high honors and thanks from a grateful Inter Nation. I hate to see the guy in so much pain trying to come back.

Nagatomo has signed a contract extension to 2017 for a pay raise of around €300,000 making Naga a newly minted million Euro (per season) baby.

Zanetti continues to drop more hints that the end is neigh. He continues to make allusions to what capacity he'll take after his playing days are done. Will it be this season or next? I couldn't tell you, but in my experience, when athletes start talking about it, they have already thought about it and discussed it... it's not long after that. Just speculating on my part, but I don't think Javier would drop into a lesser competition. I think he'll just end his time at Inter and football at the same time.

Joel Obi, Samuel and Chivu are back in practice and are looking to get fit. All three are coming back just in time to join Ricky and Handanovic on the field in what should be a pretty brutal stretch of 13 games that starts on Thurs and continues into Novemeber 11. This run includes all the derbies that Inter will participate in this season. 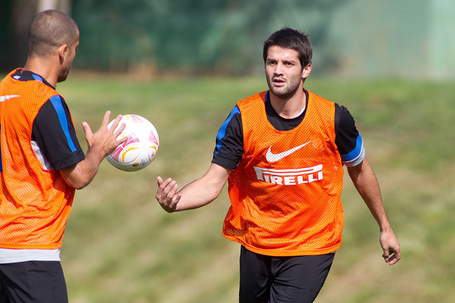 There is already a lot of buzz about what Inter will be up to this January. Some reports have us all in for Fernando. Some reports have us waiting on GRossi. Others have us hovering around Llorente. Still others are waiting for us to pounce on that player from Brazil, Paulinho. Other than the fact that it's insanely early to be thinking about this as supporters the bigger picture I think is that we all should have some idea that the product on the field right now is incomplete, even by the standards of the front office.

Studies out now in the Italian newspapers show that support in Italy for football in general is down. Scandals and dodgy refereeing are primary reason according to the survey. However, among those Italian football supporters left, Inter has both shrunk in popularity (from second to third most popular) and shrunk in hatred (by almost half) - which is really to be expected considering our recently fallen fortunes. Being a hated team is a double edged sword. We are all taught in high school (at least in the US) that popularity and being liked is a good thing. But on the other hand, there is rarely a good team that is universally held in high esteem. Basically, if you are the Champion, there are 19 professional top flight teams worth of fans hating your guts right now. Being hated isn't necessarily a bad thing as long as it's about the competition and not the other stuff. This story courtesy of FcInterNews.it

On this note, Inter has announced that Inter has the highest number of season ticket holders of any other team in Italy. This is just all around good news considering the dearth of butts in seats that is pretty epidemic in the peninsula. I know that there are a few notable exceptions, but the falling numbers of live spectators has been a problem that has been the subject of legislation and media blackouts for games. If/when Inter can get a stadium of their own this type of fan support can create an advantage in revenue over almost all of Serie A that coul d be quite exciting.

Inter released this message to the fans in light of the above announcement through Inter.it:

Thank you, fans. You are Inter

Because no number, no appearance figure, no average, no chart will ever be able to explain what it is like to be engulfed by Nerazzurri passion. Thousands of fans beside Inter on the pitch, always ready for the next adventure, the next 90 minutes, which will be special whatever the outcome. And which, beyond the win, the defeat or the draw, beyond the points and the statistics, will write another page of our story – the story of Inter and their fans.

So get ready to experience it all with us again: the cheering and the shouting, the laughs and the smiles, the joy and the anger, the battle and the triumph.

You've helped us reach the highest number of season ticket holders in Serie A. We'll thank you as best we can, by giving our all on the pitch. And when we score our first, our second, our third, our one hundredth goal, you will be there celebrating alongside us.