Inter continues to enjoy it's tour of stadiums away from the Guiseppe Meazza with yet another win/clean sheet away from home against the Flying Donkeys/Crusaders of Chievo 0-2. The win is the fifth official away win for the side this season and it's the fifth official clean sheet. I seem to be making a lot of this but I know, in my heart of hearts, that this winning spree isn't quite the impressive string that it seems to be.

I realize that the 5 wins aren't exactly coming against the giants of Italian or even European football. I get it. I understand that the 3 league wins are coming against Pescara, Torino and Chievo - 2 promotion teams and a chronic bottom half of the table sitter. The other two wins are against teams whom I would, with all due respect, place at a competition level lower than that of newly promoted Pescara.

Here's why I don't care: because I love the method that the team is using to win. The team is in transition and there may be some frustration or impatience with this way of thinking, but that is the way it is. And that fact will not change for quite a while, until the team can purge the old contracts it needs to divest itself of and finally bring in players that fit with Strama's plans. And no, this summer's dosey doe of players wasn't enough to accomplish either of those goals.

So until the team gets the players to fill Strama's scheme correctly, or until the team fires Strama, then the team is going to have to win games with a bit more grit than champagne.

And there was a lot of grit to go around. And again, I love the reaction. It was hard for the team to figure out how to maneuver in the first 20 minutes or so. But eventually the break came with a shot from Naga on the right that was deflected right to Pereira's foot, assuming he could get in position fast enough. Was it luck that Naga was able to make space on the right to take a shot? Nope, he does that all the time, a least once a game. Was it luck that Pereira was there to tap it the rest of the way? Nope, he had been running up and down the line all game long and he frequently drifts to the middle when attacking. Was it lucky that the ball deflected to the right spot? Sure, I concede that there were only so many spots the ball could have landed in to make that goal possible. Was it lucky that Pereira wasn't called offsides? It was very close - I think he was more even than off - but if he was a touch offside, the deflection probably put enough doubt in the linesman to let the play continue.

The point to that last paragraph is that the team as is needs to take advantage of it's opportunities more than devising their own and I think that the style of play that Stama has been putting in has allowed the team to do that. One day, Strama would like the team to pass and recover the ball in the midfield at whim and to use the whole field - not just the middle 25 meter wide strip that most Italian teams use, including us in our heyday - to play the game.

Against Siena we made opportunities and didn't take them despite being the better team and we got ripped for it. Siena of course was hailed with the great victory. The first half of yesterdays game for Inter was grim and in the second half we had the woodwork tested but Inter still won. It took advantage of the opportunities. Of course, unlike Siena, who were praised for taking their opportunities, we are again getting blasted for it.

But I am not talking about the media, I think we all know that there are interests there outside of the analysis of the game. But by Inter's own fans. I get some of it, I share some of it, but there are criticisms by Inter supporters I just don't get. We are in the 5th game of the season with a new coach and players and the expectation is that this team function like the team that was assembled nearly 10 years ago with twice the "budget" - a term I use very loosely in regards to this team - is just too alien to me!

There is a new reality at work here. This team is going to need time and experimentation to figure out how all the pieces will fit together - and that includes the coach. So far he's won more than he's lost and the team has scored more than it's conceded. That may all change this weekend when Inter plays a very tough Fiorentina, but that's in the future that I am refusing to look at right now. All I know right now is that this Inter is much younger than recent incarnations and that there are more new players making the field than at any point since the very beginning of Moratti's reign.

Now having said all that and having made all those excuses that I am sure I will be charged with, I am not suggesting that this team doesn't have it's faults. I think it would take the most hard headed supporter not to see that - not that I don't fit this profile from time to time, mind you. But I will take those short comings. No team is perfect - not even Barcelona or Real Madrid - and every team had to start a project at some point.

Sure, this team could have more quality on the field at any given time and there could be a better way to link the midfield to the often isolated Milito. But the trade off right now is acceptable to me. Would I rather have the spectre of a 0-1 loss with an isolated Milito and a competitive Inter or would I rather have the spectre of a 1-3 loss in which the midfield and attack are linked but the defense is left to itself far too often. That's the worst case senario choice that Inter had to weigh before going into this game amid the CRISIS hooha. Obviously Strama chose the "safer" route.

The quotes are because of the irony. The "safer" route had to go through the 3 man defense that all of Inter Nation dreaded since the advent of Gasperini and the debacle of last season. The "safer" route had to go through using this formation for the first time - away, I might add - when all of Calciodom is waiting for Strama to make that last fatal mistake so that Moratti - of the Quick on the Trigger Morattis of Milano - could fire yet another coach and sell another metric ton of daily sports newspapers for the next month as people read about the never-ending chaos.

Let's face it, it took courage to make such a "safe" change, and thus continues my love of this Inter's method. Ranieri of last season would have taken the team down to a stripped bare, tactically dormant 442 and played it like the good, conservative, scared out of his mind, beaten down to the nub little coach that he is. Strama's safe is to work in a new formation and reinforce his ideas: try to recover the ball in the midfield, use the whole field especially the wings.

I called for these types of brave changes 2 years ago when Mourinho left and it's finally here. I am not going to cry now that I have the beginning of what I want. Plus, I still have improvement over last season to make me... content, if not happy. Inter are 4th on the table at this very early juncture. Last season Inter were 17th at this point. Last season it took until late November for Inter to win its 3rd game, and yesterday in late September we managed to equal that standing. A year ago at matchday five our goals against totaled 11 and this season at the same point our goals against total 5.

So I am not going to rail against the fates that the Inter that took the field yesterday wasn't some ideal or that it wasn't pretty. Strama had his choices to make and he made them as well as he could have. He was smart with his subs - Mudingaye and Gargano to keep the strength up in the midfield battleground which resulted in another opportunity exploited for a goal.

John Adams once said, "I study politics and war so that my sons can study philosophy and mathematics". One way of paraphrasing that quote is to say that "I have to be pragmatic now so that those after me can be idealists". This Inter is being pragmatic now so that, calcio gods give Moratti patience, Strama can use his idealism at future time.

Yesterday's Inter wasn't pretty for most of the game. Chievo had their chances just as we had ours. Chievo had the possession stats and the shot stats and we needed a big game from Batmanovic to see us through, which is why I think Inter made such a priority and fuss to get the younger keeper. I concede all of this. But for large stretches of this game, I just didn't see us losing it. Even as the ball rattled off the woodwork late in the game I just wasn't panicked. The team looked good, mentally if not technically. Mistakes like errant passes and off target shots didn't rattle the players, no dropping of heads or worried faces, just increased determination. I like that. There are limits though. I have to hope that the team can buy enough time winning opportunistically so that they can gel and gain more and more confidence with each other so that each game isn't such a trial. Maybe a home win might help with that.

I still have hope. 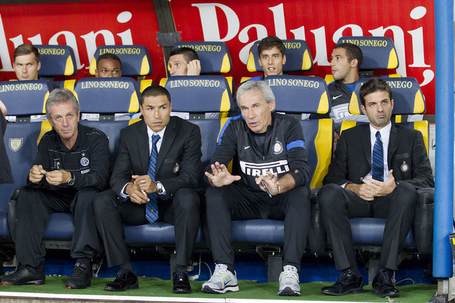