Well, we successfully got through the Serie B team (Hellas Verona) and now we need to get through the mid-table Serie A team (Bologna) before we potentially take on the big boys (Roma or Fiorentina). Both Inter are Bologna are coming off wins this last weekend, although Bologna's was a bit more emphatic than ours. But hey, a win is a win and hopefully it will propel Inter to Coppa glory. Because I really want this trophy... and the cool patch for our kits next year.

What: Inter v Bologna, Coppa Italia
Where: Home Sweet Home, the San Siro
When: Wednesday, January 15, 9pm local time (noon pacific, 3pm eastern)
How to Watch: If you are in the US, you are out of luck as there isn't any US tv coverage (outside the US, check here). If you are looking for a stream, try here.

Ok, so statistics are definitely on our side especially considering that the single loss game in 1975 and the draw was in 1967. Last time we met Bologna for a home game in the Coppa Italia was in November of 2004. That puts us in the Roberto Mancini era, with a squad made up of Nico Burdisso, Julio Cruz, Mihajlovic, Bobo Vieri, Coco, and Recoba. Goals from Cruz, Vieri, and Recoba helped Inter win this tie 3-1. I couldn't find a clip of just this game so you get the whole Coppa Italia campaign from that season. Spoiler alert: Inter won the trophy that year:

Bologna already performed one of the upsets of the 2012-13 Coppa Italia by beating Napoli in the last round. In the Serie A, they are in 14th place, just four points above the drop. Their away record is abysmal, with just two wins and eight losses (ouch). But that is not to say there isn't any talent on Bologna's squad. They have Inter youth products Bobby Acquafresca and Rene Krhin. They have internationals in Marco Motta and Alberto Gilardino. They even have the object of a long-time MAD man-crush, Alessandro Diamanti. Add to that defender Daniele Portanova, an old dude having a great season, and it just seems that coach Stefano Pioli ought to be doing better with this squad than 14th.
Let's just hope they dont finally find their groove tomorrow.

Pioli says that they are taking this competition seriously (coaches always do) and that he will field a strong side and that they want to do well (facendo bella figura) in an important ground against a strong opponent (that's us!). Now, how this will play out tomorrow is anyone's guess. Bologna did quite well over the weekend, beating Chievo 4-0. Gilardino got two goals, bringing his tally up to eight this season, while Kone and Gabbiadini got the other two. This could go either way: they could be exhausted tomorrow (yay) or buoyed by the win (boo). Teams always seem to find an extra 10% at the San Siro, so I suspect the latter. 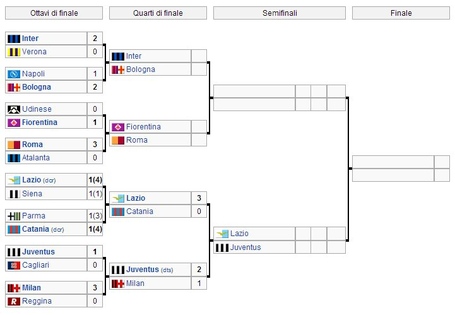 Once again, Strama is not giving us a call-up list today. I suspect that both Juan Jesus and Ranocchia will play (they were suspended last game), along with Chivu, or maybe Silvestre (Samuel has an owie). As for the rest, Strama said today that the lineup will be similar to what he played on Saturday against Pescara. He will not be getting any injured players back for this game, especially as Roma is coming up on the weekend and we will need everyone in tip-top shape for that match.

The midfield, then, may include the odious Jonathan (I would prefer Zanetti), baby Benassi (who is now 100% Inter, we bought the other half of his card from Modena), Mudingayi, and maybe Pereira (he has a broken nose but may be available anyway). In front, La Gazzetta thinks that Coutinho will get a run out in order to rest Guarin for Roma (boy, wouldn't it be handy to have Sneijder right about now?). Then there is Rocchi and Livaja with Cassano and maybe Palacio on the bench. Which highlights our need for another striker. Maybe we get Longo back or something because I am just not convinced that Rocchi is a viable option if we actually want to win something this year. There is some talk that Milito has a sore knee and will not be available for Bologna and maybe even Roma (which would be a real problem, I think). Now watch, it will be 100% different. Strama always shows me up.

Oh, and I guess both teams will wear special commemorative jerseys to honor the memory of Arpad Weisz. He played midfield for Inter in 1925/26 then became coach for two years and once again in 1932/33. He later moved to Bologna, coaching them in the mid to late 1930s. He won the the Scudetto with Inter in the 1929/30 campaign, and with Bologna in 1936 and 1937. Tragically, he was killed in Auschwitz in 1944. I think this is a wonderful idea and it is great to celebrate both Bologna and Inter's successes and the man who led us there. Hooray for both of us!

On a more personal note, I would like to apologize for missing our last game. I thought it was on Sunday and, well, just totally missed it. Whoops. But I am back now and have added our whole schedule to my calendar (thank you google calendars) so we should be golden.

This is a knock-out game so a win here is imperative. I think I say this for every Coppa Italia preview, but I really want to win this trophy. I like the patch. I like the trophy and confetti. Mostly, I just want to win something this year and the Coppa Italia may be our best bet. Strama will need to light a fire under the squad's collective ass, though, because Bologna can surprise you, just ask Napoli. Oh, and as for the market, right now it is too depressing to wrap my head around. Let's just concentrate on the game at hand and deal with the market when something actually happens. Let's just win this game, ok? OK!