Here we go, back to Rome, this time for the first leg of the Coppa Italia semifinal. I cannot stress enough how much I want to win this game. I want it a lot. A whole lot. If possible, I want just not a win, but a smack down. Now, I know that is a little improbable, but a girl can dream.

Cripes, we play Roma A LOT in the Coppa Italia:

So not so great away for us. Last time we played this fixture was April of 2011 (under Leonardo; I know, it is hard to keep them all straight). This game was decided by a single wonder goal by our very own Deki Stankovic. Enjoy the Deki, who knows when we will see it again:

Ugh. Really? Well, they have some injuries (DeRossi) and suspensions (Pjanic and Taddei), plus a couple maybes (Balzaretti and Osvaldo). I guess that means Bradley will start? And maybe Old Man Kicky? I dont know, and frankly, I dont really care. If you want to read about Roma, I suggest you check out their page here. In the end, Inter will play their game and Roma will play theirs and fans from both sides will curse the officials. Now, if, like me, you have the need for descriptive statistics, I suggest you check out Who Scored's coverage for the game Roma and Inter played just two days ago.

Check it out, you wont be sorry. 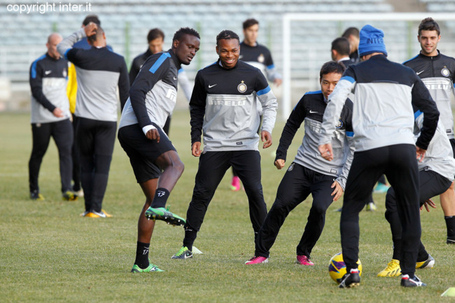 Basically, the call-up for this game is the same as the Serie A match on Sunday. Strama decided to keep the boys in Rome for duration to cut down on travel time. The big addition is Alvarez who came down to join the team yesterday. Although he has only had two days of training, Strama says he will at least make the bench.

Going the other way are Duncan and Bianchetti. Both have left the ritiro to go to their respective loans: Duncan to Livorno and Bianchetti to Verona (Hellas, I assume). So that means:

Boy howdy do I miss Cassano and Milito for this sort of fixture but I am sure we will make due. Livaja has been looking quite lively lately and Palacio has been a revelation.

Strama didn't give a press conference as such, but he did speak a bit on the Inter Channel today. He said that he will field his strongest team as "this is definitely not one of those games you rotate for." So everyone can factor in that when they try for a GIPATI.

I would like to take a moment to say Arrivaderci and Buona Fortuna to Sneijder. In his time, he was an integral part to Inter's success. Unfortunately, he never really got over Mourinho leaving. Which is really too bad. I wish him all the best in Turkey even if I am not terribly sad to see him go. I hope he gets his groove back.


I think I already said that I would really like to win this game tomorrow. Really. A whole lot. So let's get it together and win this game already. Remember, this is a two-leg tie and uses the away goal rule. So if we cant manage a win, any draw with goals works ok for us as well (provided we do better at the San Siro). The return leg was originally scheduled for like next week I think but it has been moved to April 17th. So mark your calendars now.