Inter falls in Udine after they appeared to be in advantage for the majority of the game. That is, until Mr. Christmas poked in a nice one to finish a counter immediately after Jonathan – who else - missed from what can only be described as “point blank range”.

And if there is something that is rubbing me the wrong way about this game on Sunday, it’s that Inter didn’t play badly for 90. What they did badly was manage the last 25 minutes. Juan picked up his second yellow – the first of which was pretty harsh, but in keeping with the current refereeing decisions that the team has been getting – immediately after the goal and that seemed to deflate any sense of fight back for next few minutes that the team might have mustered. Udinese, for their part, were ruthless in the few instances in which they were pressing. The second goal occurred at 75 minutes when Muriel completed a looping run, collected a through ball and fired into the net. Muriel looked like he traversed a couple of zones from the midfield through to the defense without anyone really picking him up – which kind of makes a weird sense since it was Juan who was most usually stuck on him. Once Juan left, it seems like no one bothered to cover the area/person that he was essentially locking down. The third goal was just a low pass from Domizzi to Di Natale and since Inter had well given up by then it was just insult to injury.

As I said earlier, up to the first goal from Di Natale, which was just a run of the mill classic counter, Inter were well and truly laying better than their opposition. Previous to Di Natale’s goal, the best opportunity for Udinese was a free kick at 27 minutes which went off the woodwork. While Inter played a very solid game in the first half. In the second Inter applied more pressure which culminated in several chances including an incredible shot by Jonathan from about 5 meters away that didn’t even force a save. Livaja missed a shot from about the same distance before the Winter Break but at least the youth managed to hit the post. This thing… I just don’t know how to describe it, that’s how unclear I am on how he missed it.

This leads me to the team selection for this game. I am sympathetic, to a point, on Strama letting players go on vacation before the Winter Break. I understand the distances that guys have to travel and I get that Strama has to make accommodations here and there to keep the troops happy – I am with him on this and I have no problems here.

But putting Jonathan on the field wide right in a league game that actually counts has no sympathy from me, except in one single instance which I will get to later. He doesn’t belong on the field with this team ever. Full stop. He needs to go and he needs to go now. This paragraph shouldn’t read that I blame him for the loss, because I don’t. But, he takes space from people who can help the team win games in general. And Inter are getting to the point where they can’t really drop too many more before it gets serious. He doesn’t help Inter win, but he has helped the team lose. So he needs to go.

Here’s the single instance that I will concede that letting this potzer on the field isn’t completely disastrous – and that’s to show that all his parts are working to potential customers for his sale.

There are other issues I had as well. I have a long and documented history of disliking the shoehorning of Zanetti into every formation that we use. He’s not a central midfielder. Why is he being put in a central midfield role? It usually doesn’t work, putting a older gent in a position that’s not his for 90 minutes. And it really doesn’t usually work then Inter put this particular older gent in at central midfield and ask him to run all over hell’s half acre. He doesn’t have the speed to go up and back. He doesn’t have the skills to distribute. I could see him dropping back into the back 3 when Juan was sent off. I could have accepted that. But I am continually puzzled by the inclusion of Zanetti as a midfielder.

Additionally, I think that I am now over the whole Gargano experiment. Someone needs to author a study on whether his tenacious defense turns the ball over in Inter’s favor enough times to offset the number of times the team loses the ball through his errant passing. If it’s close to or less than 50%, I think he can go back from whence he came. At that point it’s just not worth having him out there.

The midfield subs on the bench were Benassi, Mariga and Duncan. I think I would have liked to see both and Benassi in this game, especially late when it was already out of reach. I give credit for Strama using in exactly the spot I would have – instead of Gargano. But it was a day late and a dollar short. I know nothing about how Benassi can play, except to know that the 17 year old would have played poorly. But I don’t really care, because I am already getting that from Gargano. At least with Benassi I probably would have gotten better passing and some promise for the future.

I don’t have an issue with any of the other personnel choices. I didn’t at the time, and I don’t now, have any issue with the choices for the attack – I have a bigger issue with their performance. I didn’t have any issue with the defensive choices other than this – if Inter aren’t going to use Chivu then cut him loose. If he’s only here in an emergency capacity and in an emergency he isn’t available or he isn’t used, then he needs to go. It’s not worth keeping him on the bench or on the team. Same goes for Silvestre. If he’s here as the fourth defender and he’s not brought on when a defender gets sent off… then what’s the point? Here’s what I was expecting when Juan got sent off – Silvestre for Jonathan, move Cambiasso up, and move Zanetti wide and back with . That makes the formation a 432 and we stop the bleeding hopefully. Do we magically win with this? No, probably not. But I hope that we don’t lose 3-0 either. There is no real difference losing 3-0 or 1-0 but it sure feels different, you know?

And lest I forget, I wanted to compliment the only player who I thought brought it for 90 minutes – Guarin. If there was someone else on the field for him to work with, I think that he and the team would have fared even better. I am not saying that he set the world on fire, but in a game of mostly mice on both sides, he was… one of the bigger mice. 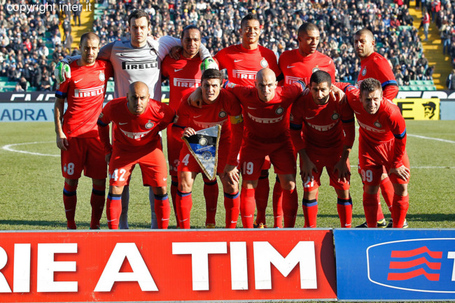