Inter came out strong in their week 9 fixture versus Verona to win the match 4-2.

The lead up into the Inter-Hellas Verona match was filled with an overwhelming feeling of nervous anticipation. Although Inter started the season in form, winning 5 out of their first 6 games, their performances of late seemed to have fizzled.  Since their incredible start of the season, La Beneamata's current form was anything but that, stagnating, as Inter only pulled 2 points out of the last three matches.  On the minds of most Interisti, a win would be the best antidote for their recent form as the Nerazzurri were riddled with injuries, unlucky calls, and at times, a shaky defense.

[Note: Carrizo was starting for Handanovic due to the red card issued in the previous week's match against Torino. Campagnaro was still injured and unavailable leaving Rolando as a starting center back].

The game started off slowly in the first few moments of the match with both sides trying to find an offensive rhythm and possession of the ball. Inter came out looking confident and was well organized in Mazzarri's formation of a 3-5-1-1. The Nerazzurri dominated possession early on which was illustrated by a strike towards goal from Cambiasso in the 2nd minute that resulted in a Verona goal kick.  A few stray crosses by Alvarez and Guarin in the first few minutes showed some of the early game jitters. In the 9th minute of play, the Inter attack was relentless on the left.  Palacio's hard work gained a throw-in, which Nagatomo converted into a corner kick that finally resulted in a Jonathan cracking volley that placed Inter on the score sheet. This new brand of Mazzarri's Inter is known to be a counterattacking outfit and the Nerazzurri capitalized on a corner kick from a counterattack.

Cambiasso received a yellow card in the 11th minute for a foul on well scouted and talented Jorginho.

Another goal was converted from a corner kick, this time on the right. Guarin kicked it towards goal and it took a deflection which Palacio pounced on for a goal in the 12th minute. This was the second goal for Inter within the first 12 minutes of the game, both coming from Verona defender deflections and both resulting from a ruthlessly attacking Inter side.

There were a few moments where Verona applied pressure on Inter players as they counterattacked which unfortunately resulted in a goal for the visitors in the 32nd minute.  Although Inter lead both in goals and possession, seemingly dominating the game thus far, Martinho scored for the away side to draw the deficit to only one. The Nerazzurri seemed to be too comfortable with their lead and Verona capitalized on the lapse in defensive pressure. Rolando and Ranocchia were both drawn to defend Luca Toni on the counter and Martinho took advantage of the opportunity to score against the back up goalkeeper, Carrizo.

Instrumental to the goal scored by Cambiasso in the 38th minute was another attacking assault on the left by Nagatomo, as he shot a rocket of a strike that shook the goalposts ricocheting into Cambiasso's path. As "Cuchu" lifted his kit to celebrate his goal, his t-shirt read, "Forza Ivan" for his former Inter teammate and current Team Manager, Ivan Cordoba, who purportedly has been hospitalized due to health reasons (peritonitis).

For the remainder of the first half, the Nerazzurri continued to attack. The constant offensive Inter threat left only one chance for Verona to counter in the last few minutes of the half but Toni was left stranded and nothing resulted from this opportunity.  For most of the first half, Toni was left alone up top, as the lone striker, as the opposition's midfield and defense were kept busy by Inter's possession and offensive attack. 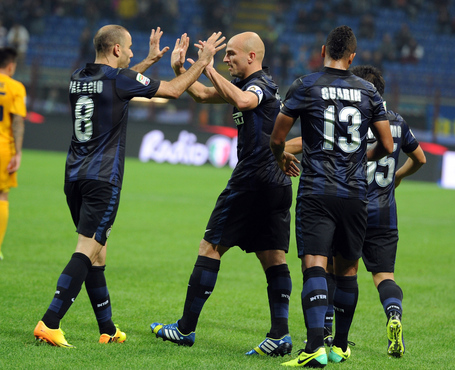 The second half started similarly as the first half ended, with Inter dominating possession as Guarin shot on goal in the 2nd minute which Rafael, Verona's goalkeeper, hit wide for an Inter corner.

Palacio received a yellow card in the 8th minute in the second half for continuing on with play after the flag went up for offside. The player protested as he claimed not to have heard the whistle blow.

In the 11th minute of the second half, from yet another corner, Rolando scored his first goal for his new team. At this juncture of the match, Inter had scored 3 goals from 9 corner kicks with approximately 30 or so minutes remaining in the match.

With two substitutions in the span of a few minutes, Walter Mazzarri seemed to think that resting two of his stalwarts was important. The Inter captain, Esteban Cambiasso was substituted in the 18th minute of the second half as Serbian international, Kuzmanovic, stepped onto the pitch for some rare minutes of play. Soon thereafter, the young Algerian international, Belfodil, came in to spell goal scorer extraordinaire, Rodrigo Palacio.

Although Kovacic had not seen many minutes thus far, he seemed to be coming back slowly from an injury plagued summer with some important minutes under his belt. He showed a flash of brilliance with an amazing backheel through ball in the 24th minute of the second half.

In the 26th minute, Romulo scored as the Inter defense let the Verona attack continue to press further up the field. Toni had very few offensive chances himself throughout the game but once again found a teammate that could take advantage of a lapse in pressure by the Nerazzurri.

Taider came in at the 34th minute as a late game substitute for Kovacic.

In the 38th minute, Mandorlini subbed Cacciatore for Gomez in an attempt to create some goal scoring chances.  There was better pressure from Inter in the last 10 minutes of the match as Verona attempted a last ditch effort to score goals in hopes of trying to draw a point from the match.

Iturbe and Jorginho were non-factors as Mazzarri and his men clad in black and blue neutralized the Verona attack.

Jonathan picked up a yellow card in the 44th minute and Iturbe was shown a well-deserved yellow card as his frustration showed as he fouled Inter's Saphir Taider in added time (46th minute). The match ended with a strange double red card shown to Inter's Belfodil and Verona's Moras, for an "animated exchange of words, " according to the Inter website.

The victory today was an important one as Inter moved to 4th place in the league standings, following in respective order, Roma, Napoli, and Juventus. 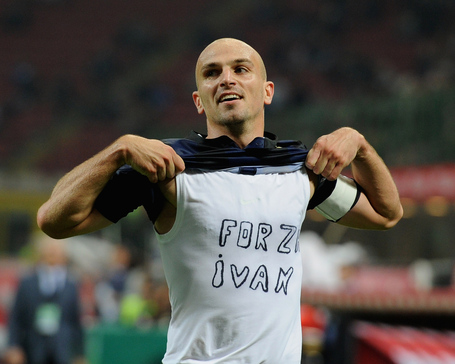 Lastly, Esteban Cambiasso spoke with Sky Italia and explained his goal celebration. He stated, "I dedicated my goal to Ivan Cordoba because he's undergone an operation and we miss him. He does a great job every day and is an important figure for the team."

Lastly, our thoughts and prayers are with Ivan Cordoba as we wish him a speedy recovery.