The newspaper headlines leading up into the Inter-Livorno match was billed as the Nerazzurri versus the "Baby Nerazzurri," as four Inter youth players were currently on loan to the visiting away side. In addition to questions of how the Inter youth prospects loaned to Livorno would perform against the Nerazzurri starting XI, many were wondering if Inter could close the gap in points amongst the top three league leaders in Serie A.

The Inter starting line-up consisted of Handanovic in goal, a three man back line of Rolando in the center of defense supported by Samuel and Ranocchia on the left and right, respectively. In the midfield, Jonathan and Nagatomo were on the flanks with Cambiasso, Taider, and Alvarez in the center. Rounding up the Inter offense, Guarin was playing in a trequartista role slightly behind Palacio in attack.

The first half was dominated by Inter possession and although rising Inter talents on loan, goal keeper Bardi, midfielder Duncan, and defender Mbaye were among the Livorno starting line-up, the elder Nerazzurri easily neutralized the away side. Inter's pressing attack finally created a crack in the Livorno defense as Jonathan crossed the ball into the box resulting in a spilled ball by keeper Bardi and an own goal. The Nerazzurri led one-nil at the half.

The second half opened with Livorno's attack as they looked for goal at the feet of striker, Paulinho. He had many attempts towards the Nerazzurri goal which Inter keeper, Handanovic handily dealt with. The two sides alternated ball possession as Inter looked to be content with their one goal lead.

Mazzarri sensed that he needed to change the pace of Inter's game in the second half and substituted Kovacic for Alvarez and Belfodil for Guarin. Initially Kovacic seemed to play deeper back than his subbed counterpart Alvarez, helping Cambiasso bolster the backline but eventually pressed further up in attack as he played an instrumental part in the second Inter goal.

Although the lead story into the game focused on how the young Inter players on loan, Bardi, Duncan, Mbaye, and Benassi would perform against the starting Inter XI, while they showed promise they were ultimately non-factors. Bardi had a momentary lapse in goal during the first half as he fumbled a ball that ultimately led to an own goal. Many speculated that it was most likely attributed to inexperience. He immediately redeemed himself several times throughout the second half with a few spectacular saves. The young 21 year old goal keeper showed his budding talent with a solid second half performance substantiating claims that he may be the heir apparent to Azzurri goalkeeping legend, Buffon. Duncan's performance was a bit more emotional as he tried to gain the attention of his owners with some physical play. A yellow card awarded to him in the first half would lead to his departure from the match as another Inter product, midfielder Benassi was substituted for him in the beginning of the second half. Duncan's exit gave way to Benassi who showed potential as the big midfielder helped boost the Livorno attack. Of all the Inter youth products, Mbaye shined in defense and the hope is with consistent first team action at Livorno, the young defender will develop to his full potential.

Palacio is Serie A's third leading scorer with 7 while leader Rossi has scored a total of 11. Palacio's goals have all been scored from the run of play as Inter have yet to be awarded a penalty kick in round 12. Palacio did not get onto the score sheet but he once again heavily influenced the Inter attack additionally tracking back to help on defense.

The highlight of the match was Javier Zanetti's return to the pitch. After a horrific Achilles' injury in April, only a little more than six months had passed between the injury and Pupi's return. The entire stadium erupted in a standing ovation as the Inter captain found his rightful place on the pitch. It was a highly charged atmosphere where Interisti worldwide sat with pride and were a bit inspired at such a heroic comeback.

Zanetti's presence was immediately felt with one of his trademark charges up the field. He connected with Kovacic who created a bit of magic at his feet to find Nagatomo for a sublime finish, sealing the home side's victory with a goal. Kovacic seems to be most comfortable in a creative role as his first instinct is to find the open man for goal. He is reportedly going to be brought back slowly to integrate into Mazzarri's squad as he had been previously plagued throughout the summer with a muscular injury.

With a victory in tow, Inter secured three valuable points to challenge the top three spots as they now only trail third placed Napoli by three points for a highly coveted Champions League spot. 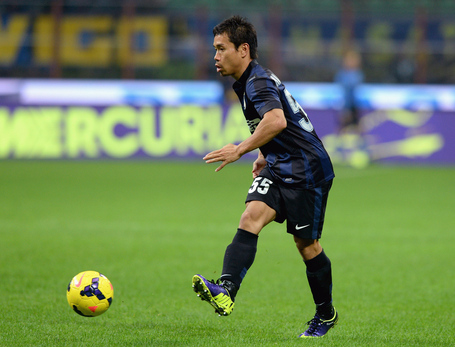 While Pupi may not be fit to start yet, his presence on the pitch symbolizes much more than a player returning from injury. His return serves as an inspiration to us all. Zanetti embodies what Inter stands for, the will, the heart, and the character to never give up and fight for victory no matter how challenging and difficult the path may be. Interisti's mantra worldwide is known as "Non Mollare Mai" or never give up. If one person captures the spirit of Inter, it is Javier Zanetti. Welcome back, Capitano! 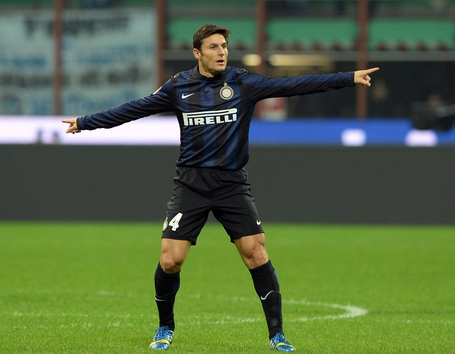 Inter walked away with an important victory that reflected in fourth place amongst the Serie A league leaders. The Nerazzurri have accumulated a total of 25 points only trailing third placed Napoli at 28, Juventus at 31, and Roma at 32. In round 12 and an upcoming international break where 10 of the Inter players are playing for their respective national teams, the league and that all important Champions League spot are wide open, perhaps for the Nerazzurri's taking.