Talking points as Inter draw away from home against Bologna with only one point to show for a solid yet unlucky performance.

As the Inter ownership and leadership transitioned this past international break from Massimo Moratti to Erick Thohir, could this change at the Nerazzurri helm be sealed with a win away to Bologna?

Alessandro Diamanti is a well-known attacking force to be reckoned with in the Bologna offense. The captain is feared by his opponents due to his flashes of brilliance and his ability to change the game with a cracking goal. The key for Inter would be to stop him defensively and subdue any hint of masterful play which would in turn quiet the Bologna offensive scheme.

In addition to Diamanti, other midfield threats were former Inter Primavera player Rene Krihn and loaned (and Inter owned) player Diego Laxalt. Both youth products have been touted as future talents. Would they try to impose their presence in the midfield attempting to catch the eye of their owners? While talk of Laxalt starting against Inter was in the newspaper headlines, the talented Uruguayan was on the Bologna bench and did not have a chance to face the side that owned his rights. Midfielder Krihn while starting out strongly, was easily neutralized by the Nerazzurri midfield and proved a non-factor. Another former Inter youth product, Robert Acquafresca, was also on the Bologna bench but did not see any action.

Campagnaro arrived this past summer as a free signing and the former Napoli defender arrived without much acclaim but under new Inter boss Walter Mazzarri (also his manager while at Napoli), he slid in naturally on the right side of a three man defense fortuitously for the Nerazzurri. All was well until he happened to pick up an injury while out with the Argentine national team which put him out of commission for Inter for a good part of two months. While this was more than enough drama to test any defense, this was only the beginning due to differences in opinion regarding his fitness levels from his club, Inter, and his country, Argentina. Although there was a bit of tension regarding whether Campagnaro was to be called up and play for Argentina, ultimately it was agreed upon between Inter and the Associacion del Futbol Argentino (AFA) that Campagnaro would not be recalled as his fitness would be at risk if he were to come back prematurely. (To read more on this situation, click here for the full statement on the Inter site).

As if the Campagnaro situation were not enough to deal with, the defensive situation for Inter was complicated threefold due to the Andrea Ranocchia yellow card accumulation leading to his suspension as well as an injury to Walter Samuel sustained in the friendly versus Chiasso that was held during the international break. Could the makeshift back three of Campagnaro, Rolando, and Juan Jesus be enough to withstand the Bologna attack?

Considering Campagnaro was returning from injury, he played well even though he was eventually substituted in the waning minutes of the match for an attacking option in the young striker, Ishak Belfodil. Rolando was an adequate replacement until Ranocchia returned in the center of defense. Juan Jesus has continued his development as a left sided center back under Mazzarri's oversight. While the first options of the backline would most likely consist of any combination of Campagnaro, Ranocchia, Samuel, or Juan Jesus, Rolando has proven to provide adequate relief in either Ranocchia or Samuel's absence. 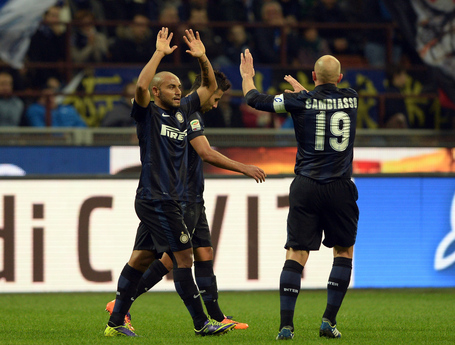 Wingbacks Yuto Nagatomo and Jonathan attacked on the left and right flanks, respectively, and have found renewed form under Mazzarri. Both players have blossomed under Mazzarri's tutelage as they have developed their attacking components of their repertoire. Whereas the offensive components are strong, it is important that they communicate with their midfield counterparts to provide the necessary cover for the defense when the opponents counter in attack. When both flanks and midfield options are pushed forward it sometimes leaves scarce coverage in the back which has resulted in goals conceded. This needs to be addressed immediately as more competent offensive opponents in Napoli and Milan are on the horizon for the Nerazzurri and it is important to finish the calendar year strongly as Inter go into the Christmas break.

Alongside Nagatomo and Jonathan, Ricky Alvarez has also found confidence and form under Mazzarri. The key to the Nerazzurri attack would be Alvarez and the Bologna midfielder Diego Perez was the key for the home side's success in stopping the Inter attack. Which South American would win this midfield battle? Like the final score line, the midfield battle between the two seemed to be a bit of a draw. While Alvarez would have a few moments of magic, shaking and baking, leaving Perez in his dust, the Uruguayan would also clamp down on him defensively and for the most part, the Nerazzurri offense would go through other players as the Alvarez and Perez midfield jostling preoccupied the two players. Guarin was actively pressing forward and helping in defense demonstrating a solid performance appreciated by all.

Whether it is too long of a break in between competitive matches or too many tired legs from traveling internationals, the international break has proven to be a bit of a downer for the Nerazzurri this season. While many may perceive such a lengthy respite from matches as a positive sign with much needed rest for players, it may be a hindrance especially when teams go into such a break on a winning note. The match versus Bologna was no different as the minutes progressed deep into the match. Tired legs began to show as Nagatomo immediately was substituted due to injury and instrumental players like Palacio (who played 90 plus minutes midweek for Argentina as well as intercontinental travel back) may have felt fatigue as opportunities around the opponent's box were not put away as the goal phenom has previously done in the past. With this being said, Inter had 22 opportunities on goal, both on and off target, and were unable to convert the multitude of chances for goal. Inter need to do better and hopefully with Milito and Icardi recovering in a few weeks, it will ease some of the attacking pressure on the converted loan striker, Palacio.

While Inter dominated ball possession with 63% and 22 shots towards goal (six shots on target and 16 shots off target), the home side were able to neutralize an injury dissipated Nerazzurri side. The makeshift Inter defense while competent most of the match was caught in a vulnerable position when Bologna counterattacked and converted the offensive attack for goal. The Nerazzurri midfield and accompanying flanks while offensively minded in attack must communicate with each other and while one presses forward, the other must be ready to cover defensively. When both players (especially on the same side) push up in attack, it leaves the center backs to deal with quick striking options and at times are outnumbered in the counter. This needs to be addressed as more savvy attacks with Napoli and Milan will exploit this vulnerability.

Statistics from the Inter match report:

Despite dominating 63% of ball possession, Inter could not finish the multitude of opportunities at goal. The combined shots on and off target were a total of 22 which the Nerazzurri players need to convert in the future to win games. Where La Beneamata benefited from a fortuitous deflection from a Bologna defender to convert Jonathan's strike on goal, the last Inter strike on goal, a thunderous strike from defender Juan Jesus, only served to shake the home side's goalposts as Inter threatened but could not follow through with their threat to win.

It is crucial that Inter work on these areas of improvement as three points and a victory at home are important for the Nerazzurri to keep their hopes of a third place finish and Champions League competition alive as they face Sampdoria at home this upcoming week.

[Note: No penalties were awarded to Inter in 13 rounds.]