Inter played away from home in an attacking style in the first half and although riddled with injuries in the second half, managed to keep a clean sheet and walk away with 3 valuable points and the win.

The midweek fixture against the black and blue Bergamo side, Atalanta, proved to be quite tricky leading up to Halloween.  Both Nerazzurri sides walked away with a point and despite fighting fatigue, the rain saturated pitch and nasty elements, perhaps a draw with Inter's bogey team was a treat after all.  Although Inter have only lost one match all season, it was imperative the Nerazzurri win against the always attacking Udinese, especially if the goal is a third place finish for Champions League next season.

[Note:  Hugo Campagnaro is still injured on the sidelines while Javier Zanetti was on the bench, his first call up to the squad since that Achilles tendon injury in April.  Kovacic remained on the bench as he was doubtful to start due to a slight knock he picked up during the midweek fixture].

The first half began with the Nerazzurri kicking off with possession as they attacked from the start of the match.  Handanovic recovered from the midsection injury midweek to face his former side in goal.  Samuel bolstered a three man backline flanked with Juan Jesus on his left and Ranocchia on his right to ward off the dangerous Udinese attack.  Jonathan and Nagatomo played on the wings with Taider, Cambiasso, and Alvarez in charge of midfield possession.  Guarin was in an advanced role trying to connect the midfield with goal scoring phenom, Palacio.

Inter tried to claim possession and pace of the ball almost immediately from the opening whistle.  Palacio drew a foul in the 4th minute and was awarded a free kick outside of Udinese's penalty box on the left hand side towards goal.  Cambiasso took the free kick and it glanced wide right of goal resulting in an Udinese goal kick.

The Nerazzurri pressed hard on attack maintaining a good portion of the early possession while Udinese counterattacked, as always an offensive threat with their front man, Di Natale, lurking around goal.  Udinese striker Muriel attacked down their right almost connecting with Di Natale at an attempt to score in the 6th minute of the match.  This was soon followed by a quick Inter counter but Palacio was whistled offside.

A clumsy Inter attempt at goal in the 17th minute from a beautiful through ball by Nagatomo again resulted in another Udinese goal kick.  This constant pressure on the Udinese defense created many opportunities.  An incredible goal saving tackle by Naldo blocked Palacio's attempt at goal and Udinese keeper, Brkic made a fantastic save on a Cambiasso rocket of a strike on goal.  The Nerazzurri offensive pressure created another excellent opportunity in attack but Nagatomo sliced his shot wide of goal.

The Udinese defense finally gave way under the relentless Inter pressure as the Nerazzurri attack scored in the 25th minute.  Jonathan won a free kick that Taider delivered perfectly onto the head of Inter striker, Palacio for goal.

Another fruitful offensive gem was harvested in the 29th minute as a corner was converted for an Inter goal.  Brkic came out of his Udinese goal to punch out the ball but the corner kick was volleyed into the back of the net with a powerful strike by Inter center back, Ranocchia.  The goal was so thunderous that it left Walter Mazzarri stunned on the sidelines.

To counter the Inter attack, Udinese also pressed forward almost scoring but the Nerazzurri defense was lucky to stave off Guidolin's men.  A badly missed clearance by Inter's defenders could not be converted by the home side much to the relief of Interisti watching worldwide.

An unfortunate injury sustained by newly recovered Inter center back, Walter Samuel in the 38th minute led to a Rolando substitution.  This was a straight injury substitution and Rolando played in the center of the three man defense with Ranocchia and Juan Jesus remaining on the flanks.

Inter maintained the majority of the possession in the remaining minutes of the first half peppered with the occasional Udinese counterattack.  Taider tried his hand at goal with a blast on the right in the 43rd minute but Brkic saved it easily.  A collective effort in the Inter backline neutralized the Udinese attack in the first half although this same effort would be sorely needed in the remainder of the match to keep the Udinese attacking duo of Di Natale and Muriel off the score sheet.  Although there was two minutes of added time the score line remained the same with Inter holding a 2-0 goal advantage into the half. 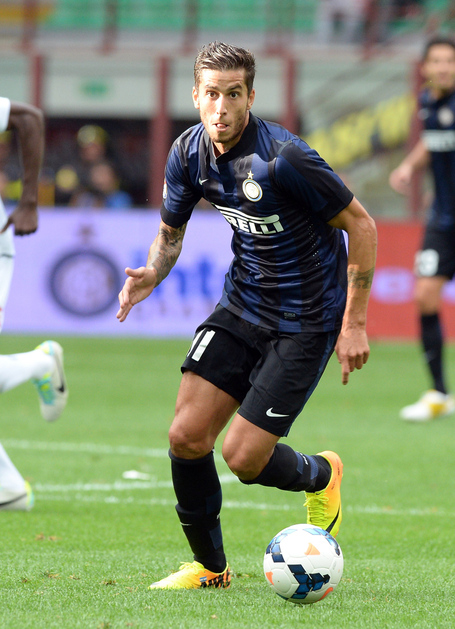 While the first half was dominated by Inter possession, the second half began with a fierce Udinese onslaught.  The black and white Udine side kicked off looking to score some goals to even out the score line drawing multiple saves in the opening minutes from former Udinese goalkeeper, Handanovic.

There was a lot of back and forth between Inter and Udinese in the beginning of the second half as the attacking Inter side of the first half had yet to make an appearance in the first 10 minutes of the second half leaving a frustrated and animated Mazzarri to shout instructions on the sideline.

Two time award winning Capocannoniere, Di Natale headed to the bench early as he could not continue on due to injury. In the 12th minute of the second half, he was replaced by 6'5" Swede, Renegie in attack.

The home side began to apply pressure and Udinese defender, Domizzi drew a dangerous free kick outside of the Inter box in the 19th minute.  Muriel took it but fortunately for Inter it sailed high as Handanovic watched it fly over his head.  Another Udinese shot on goal by Fernandes in the 20th minute reflected a change in tempo for the black and white clad men as their offense continued to attack.

Jonathan sustained an injury and was substituted in the 23rd minute.  Pereira came in as a substitute and played on the left as Nagatomo switched from the left to the right side of the pitch to reinforce defense.

While Inter was forced to make an injury substitute, Udinese subbed Muriel for another young attacking talent, Nico Lopez in the 25th minute of the second half.

The third Inter substitute was used for another injured defender, this time on goal scorer, Ranocchia as he was substituted in the 35th minute.  Former Inter youth project, Andreolli and current summer signing came in as a substitute with some rare minutes as he played on the right of Rolando in defense.

Udinese stepped up their attack midway through the second half, with the visiting side having to resort to fouls and picking up subsequent yellow cards in trying to stop the home side from scoring.  Fortunately for Inter, it seemed as if Udinese's strike force went limp after Di Natale was subbed due to an injury.   One of their few attacks on the Inter defense resulted in pulling down Inter defender Andreolli for a free kick.  In the 43rd minute, Badu attempted to strike it toward Inter goal only for it to sail high and wide.

Five minutes of extra time was given by the referee and Inter continued to press on.  Finally in added time, the Argentine duo of Palacio and Alvarez connected for goal.  Palacio attacked down the right drawing the defenders leaving Alvarez wide open in front of goal and easily converted it to get on the score sheet.  Palacio rewarded his hardworking teammate, Alvarez with an unselfish assist thereby sealing an away victory in the 46th minute with the third and final goal of the match.

The Nerazzurri side came out attacking in the first half and put away three valuable goals in the game.  Although riddled with injuries before and during the match, the players managed to show enough grit and character by keeping a clean sheet and ensuring a victory.  Inter earned three valuable points away from home thereby keeping their hopes of Champions League alive as the Nerazzurri sit in fourth place with 22 points in league standings.