Despite a high level of emotions contributed by the presence of a multitude of Inter legends and the first match in attendance of new Inter Owner, President, and CEO, Erick Thohir, Inter drop points at home as they draw with Sampdoria.

There was a high level of emotion prior to the start of the game as a number of former Inter players were present at the first official match attended by new Inter Owner, President, and CEO, Erick Thohir.  Those in attendance were impressive and included Inter legends Bergomi, Suarez, Pagliuca, Beccalossi, Materazzi, Stankovic, and Figo, to name a few.  The Inter twitter account even tweeted out a picture of the former Nerazzurri greats with President Thohir:

With many Inter legends attending the festivities, could the current Nerazzurri players deliver a present for all in attendance?  Or would former Inter player and current Sampdoria coach, Sinisa Mihajlovic spoil all of the fun?

[Note: Samuel is still recovering from injury. Zanetti started at left back as Nagatomo is also out due to an injury sustained during last week's match against Bologna].

The match kicked off with the away side taking possession as Sampdoria faced an Inter formation of 3-5-1-1.  Handanovic was in goal and a three man back line of Campagnaro, Rolando, and Juan Jesus played in defense.  Jonathan and Zanetti were on the right and left flanks respectively (as Zanetti filled in for injured Nagatomo).    The remainder of the midfield consisted of Taider, Cambiasso, and Alvarez, with Guarin playing slightly in back of striker, Palacio.

As previously mentioned, many Inter legends were in attendance (purportedly 54) and with Zanetti starting in his first match since sustaining that horrific injury in April, the emotions were extremely high.

Both sides started the match by pressing forward with Sampdoria going for goal in the early minutes quickly followed by an attempt towards goal by Inter.

Alvarez received a harsh yellow card for an accidental handball in the 10th minute as the referee thought he hit it with intention.   The Inter player's yellow card was quickly followed up by one awarded to the away side as Gabbiadini took Palacio down in the 11th minute as he made a run towards goal in open play.

More back and forth play continued on until Inter were able to capitalize on an excellent opportunity for goal in the 18th minute. Alvarez duped defenders with a couple of shake and bake moves on the left side of the pitch to find Guarin in the box who then found the back of the net for goal giving Inter a 1-0 lead over Sampdoria.

While Inter led on the score sheet, ball possession alternated between both sides for the remainder of the first half.   As halftime approached, only two minutes were added and the first period drew to a close with Inter leading Sampdoria by a scoreline of 1-0. 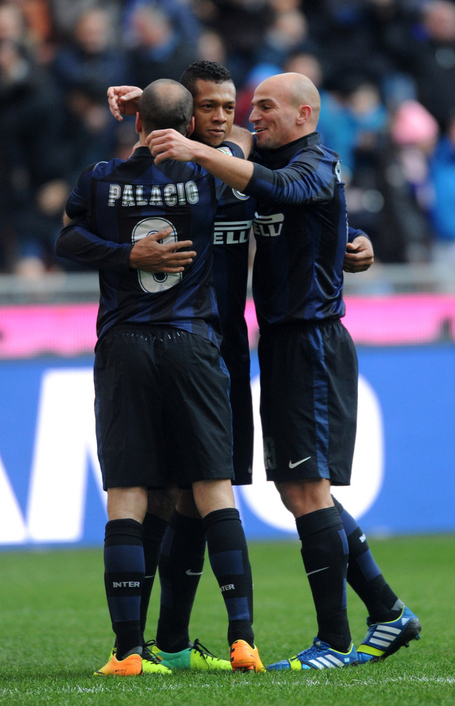 The second half began similarly as the first half ended with a lot of alternating ball possession.  Sampdoria had a goal called off in the 8th minute of the second half as Eder was clearly offside.  More back and forth between the two sides in terms of possession with no real threats on goal carried on for most of the half.

The Nerazzurri players seemed to be slowly losing focus, intensity, shape, and organization which Inter boss, Mazzarri tried to counter with a substitution.   Taider came off while Kovacic entered the game in the 17th minute of the second half.  There was hope by the Inter faithful that Kovacic would provide the much needed connection between the midfield and attack.

As the game progressed with the scoreline unchanged Mazzarri made a defensive midfield substitution in the 37th minute of the second half. Goal scoring attacking midfielder, Guarin was subbed for defensive midfielder, Mudingayi, as if Mazzarri sensed that he needed to bolster the midfield as the Inter players continued to lose steam and played deeper into their third of the pitch.

While Mazzarri reinforced the midfield with Mudingayi, he also made a last minute push to score one more and put away the game, as Belfodil came on for Alvarez in the 41st minute of the second half.

Unfortunately, the late game substitutes were for naught as Sampdoria equalized in the 44th minute as the away side's late sub Renan scored from outside of the box for a late game equalizer.   The game was level at one a piece and despite four additional minutes, the final score was Inter 1-1 Sampdoria.

With the decreasing levels of intensity, continued loss of shape and organization, and play falling deeper into Inter's own third, it came as no surprise that Sampdoria equalized in the waning minutes of the match to spoil the party for the new Inter Owner, Thohir.  Inter would remain in fourth place in league standings with a fifth place Fiorentina on their heels with a game in hand as the Viola are scheduled to play the Monday fixture.  Only time will tell whether the Nerazzurri would rue these missed opportunities and lost points as the fight for a Champions League spot proves to be more challenging and will ultimately be decided in the second half of the season.