Inter walk away with three important points as well as city bragging rights as they beat city rivals, Milan to win the Derby della Madonnina.

The lead up into this version of the Derby della Madonnina focused not on the players on the pitch but of the league's decision to close the Curva Nord which was thankfully overturned days before the match.  (Click here to read the SB Nation Inter story about the initial decision to close the Curva Nord and click here to read the interview with Chief Executive, Marco Fassone, who spoke about the overturned ban).

With the matter of the prospective closure on many Interisti's minds, it left little room for talk about the derby on the pitch.  Inter's creative catalyst, Alvarez had received a game suspension for a double yellow card and subsequent sending off in the league's previous match away to Napoli last week while Milan's captain, Montolivo received a ban that would see him miss the derby as well.  Other changes were also concurrently happening at both Milano based clubs as new Inter owner, Erick Thohir was scheduled to be in attendance of his first Derby della Madonnina while across town, recent reports of Adriano Galliano leaving reflected possible changes in their organizational chart.

Considering the multitude of distractions both clubs were currently embroiled with and disappointing positions in the league table with Inter in 5th place prior to the start of the match and Milan in 13th place, which side would take advantage of the opportunity to go into the break with momentum?  Would the Nerazzurri seize this opportunity for three important points to stay amongst the hunt for a Champions League spot and bragging rights over the Christmas holiday?  Or would Milan play the role of Grinch to steal three important points away from Inter and possibly attempt to spoil Christmas for the Inter faithful?

The last fixture to be played of the calendar year was Inter hosting Milan in the latest edition of the Derby della Madonnina.  Inter's formation of 3-5-1-1, a favorite of Nerazzurri boss, Mazzarri included Handanovic in goal, a three man backline of Campagnaro, Rolando, and Juan Jesus, a five man midfield from right to left of Jonathan, Taider, Cambiasso, Zanetti, and Nagatomo, and an offensive attack of Guarin slightly behind lone striker, Palacio.

Inter came out in the first minutes of the match in an attacking fashion which quickly dissipated as cross town rivals, Milan regained their composure and possessed the ball with frequent counter attacks from the home side.  While Inter's cross town rivals tried to take advantage of the Nerazzurri playing deep within their final third of the pitch, the home side's offensive attack relied heavily on over the top balls trying to find Palacio but to no avail.

There was a lot of back and forth with Milan pressing forward using the middle of the pitch to find former Inter player, Balotelli and Inter trying to use the flanks with Jonathan and Nagatomo crossing the ball into Palacio.

As expected in any derby, the tackles were a little harder than usual with a bit more bite to them and the moment of controversy came late in the first half, when Milan defender Zapata brought Inter striker down in the box in the 40th minute which referee, Mazzoleni waved off much to the chagrin of Interisti watching worldwide.  In the final match of the year, Inter would remain without a penalty awarded to them.

Going into the halftime break, the score line remained at 0-0 despite the clear penalty on Palacio that was not given.

Inter began the second half looking much more organized and with a better offensive attack.  The game seemed to change when Taider was substituted for Kovacic in the 12th minute of the second half.  The young Croatian international rose to the occasion and provided the creative outlet and structure that was lacking for the Nerazzurri in the first half.  He demonstrated the much needed maturity that Mazzarri had requested from him during his pre-match game presser.  It is important to note that while Kovacic is incredibly talented, he is still developing and may be inconsistent as most young players can be but with time and confidence, he can develop to his full potential like Alvarez has under Mazzarri's tutelage.

The Nerazzurri continued to press throughout the second half and capitalized on a Jonathan cross into Guarin who connected with Palacio as he flicked the ball with his back heel to find the back of the net for the derby winner in the 41st minute of the second half.  Ironically, while Zapata's earlier transgression in the penalty box was waved off by the referee, goal scoring phenom, Palacio, converted this opportunity with a flash of brilliance for the winning goal.

With high levels of emotions come poor decisions, and particularly in former Inter player, Muntari's case, his scuffle with Kuzmanovic cost him a red card and was promptly sent off in the 47th minute of the second half.

Notwithstanding non-penalty calls, a red card, and sending off, both sides have seen better derby performances.  Despite the drama before and during the match, the only goal scored was from Argentine Palacio and the match ended with Inter victorious over their city rivals, Milan, 1-0.

Although Inter's performance was far from their best, the late game winner from Palacio in a flash of brilliance proved to be enough to crown the Nerazzurri city champions over the winter break.  This Derby della Madonnina belonged to Inter and the city of Milano, deservedly draped in black and blue. 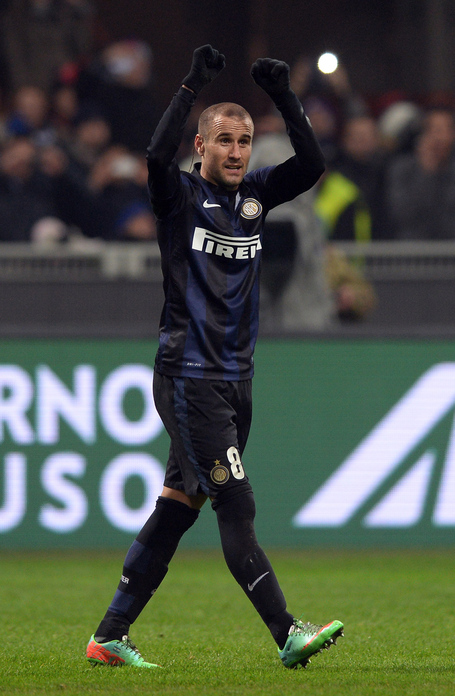 [Penalty watch:  Inter have yet to be awarded a penalty through 17 rounds of league play].