The Nerazzurri survive a late scare and hold on to victory against the Serie B squad. Inter will face Udinese in the Coppa Italia's Round of 16 in January.

After dropping points in two consecutive rounds of Serie A, Inter turned their attention to the Coppa Italia for some midweek action. The opponents for this elimination round were Serie B newcomers, Trapani. A few thousand of the western Sicilians made the trek north to the San Siro and were willing participants in playing the underdog card against the Milanese giants.

The match started as many predicted, with Inter holding majority possession and dictating play. Despite Walter Mazzarri choosing to go with a second strength starting eleven, the home team repaid the faith of their coach shortly after kickoff with a goal. Fredy Guarin lined up a free kick outside the Trapani box and instead of letting it fly, he drove the ball low. The ball took a slight deflection before ending up in the back on Marcone's net and Inter were up 1-0 in the 4th minute of play.

The Nerazzurri dominated much of the first half and had numerous chances that were squandered. The Algerian connection between Saphir Taider and Ishak Belfodil seemed to be working, as the two created opportunities which neither was able to convert. Trapani had a good spell of possession midway through the first half and could have punished the home side's miscommunication and unnecessary fouls, had it not been for the offside flag that relieved the pressure off the defense.

Inter were finally able to break through for a second goal in the 40th minute, with Belfodil volleying home a cross from Alvaro Pereira. This was the 20 year old's first goal for the Nerazzurri and hopefully the first of many to come. Another first came four minutes later, as La Beneamata were finally awarded their first penalty of the season in any competitive play. Taider sent the Trapani keeper the other away as he coolly slotted the ball in the net, giving the home side a 3-0 halftime lead. 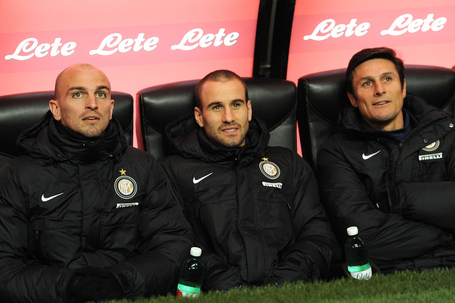 The second half started somewhat like the first, with Inter holding possession and leading some attacks into the Trapani box. The teams soon reversed roles shortly thereafter, as the Sicilians had a flurry of attacks on the Nerazzurri goal in a span of minutes. The away side was rewarded with a goal in the 54th minute, when Caccetta slipped the ball through Carrizo's legs from a tight angle.

Inter tried to bounce back immediately, as Taider whipped a cross in front of the Trapani goal, which was just out of Pereira's reach. Both teams went back and forth attacking while trying to find the next goal. In a worrying scene, Mateo Kovacic asked to be substituted because he felt some discomfort due to some hard tackles he had been on the receiving end of. Kovacic later said that he felt okay and he asked to be taken off for precautionary reasons.

The Kovacic substitution resulted in another first; 19 year old Patrick Olsen made his official debut for the Nerazzurri as he came on for the 19 year old Croatian international. The last twenty minutes were manageable for the home side, as Mazzarri also decided it was acceptable to hand two more debuts out to Inter Primavera players. Federico Bonazzoli came on for the goal scorer Belfodil and made history when he came onto the pitch. Bonazzoli is the youngest player to ever play for Inter, clocking in at a whopping 16 years, 6 months, and 14 days. Mazzarri's third substitution came in the 85th minute when he gave Isaac Donkor his debut, taking the place of Juan Jesus.

The last few minutes of the match were much more stressful than necessary. After Bonazzoli nearly scored with a fantastic chance in front of goal which went just wide of the post, Trapani scored in the 90th minute to send the match into a frenzy for the four minutes of added time. Inter were punished again late in a game for their careless fouls and lackadaisical defending.

The away side continued to attack in stoppage time and perhaps the only thing that stopped their assault was when they had a player who could not continue due to injury, subsequently leaving them with ten men. Taider tried a shot on goal from far out, which almost looped over the Trapani keeper but was caught before it went over his head. Pereira nearly took out his teammate, Marco Andreolli, with a clash of heads as they were defending, but thankfully he was okay. The referee mercifully ended the match as play had already stretched into the fifth minute of added time.

Both Massimo Moratti and Walter Mazzarri looked very displeased with the second half performance as the cameras cut to them after the 90 minutes were up. Once again, Inter had let in a late goal that could have compromised the match. The Nerazzurri will now face Udinese away in the Round of 16 when the Coppa Italia resumes in mid-January. More pressing is this weekend's fixture against Parma, which takes place at the Meazza with a scheduled kickoff time of 20.45 CET on Sunday, December 8, 2013.