Highlights and analysis as Inter face visitors, Parma, resulting in a draw at three a piece.

In the final match of round 15, Inter hosted Parma at the Giuseppe Meazza stadium. While fourth placed Inter faced their visiting opponents who currently reside in mid-table league standings, a number of Parma players were hoping to exact revenge on their former side. Amongst those who previously wore the Nerazzurri kit were Cassano, Gargano, and former Inter youth product, Biabiany. While revenge was on the minds of former Inter players now donning the gialloblu of Parma, the Nerazzurri players' minds were focused on achieving a win and three valuable points that may have seen them within two points of third place in Serie A.

Could Inter break their current winless streak as they faced Parma at home? What adjustments would be made by Mazzarri and the team to break their stagnant performances of late to rally up a much needed victory as important matches to Napoli and Milan lay on the horizon?

[Note: Samuel was still out injured although he rejoined the group to train midweek. Ranocchia replaced Rolando as center back and Zanetti started on the left flank as Nagatomo was still recovering from injury but was available off the bench].

Inter came out with Mazzarri's trademark 3-5-1-1 with a starting formation consisting of Handanovic in goal, a three man back line of Campagnaro, Ranocchia, and Juan Jesus supported by a midfield from right to left, Jonathan, Guarin, Cambiasso, Alvarez, Zanetti, and creative midfielder, Kovacic slightly in back of Palacio in attack.

The Nerazzurri came out attacking with Palacio shooting outside of the box in the first minutes of the match followed immediately by Parma's counterattack necessitating a fantastic save by Handanovic in the 4th minute.

In the first moments of the first half both sides pressured in attack and maintained a fast pace as scoring goals were on both teams' minds.

Parma player, Parolo, was awarded with the first yellow card due to an aggressive challenge on Campagnaro in the 9th minute.

As Parma continued to push farther up towards the pitch, Inter allowed the away side more ball possession and space as the Nerazzurri began to sit farther in their third of the pitch. Eventually the visitors made the home side pay as former Juventus player and current Parma midfielder Marchionni passed a through ball to teammate Sansone to put the away side up 1-0 in the 12th minute.

While Inter were stunned after conceding an early goal, the players reacted well and pressed in a more attacking fashion in the second portion of the first period trying to remedy the visitor's goal with a goal or two of their own.

As the Nerazzurri dominated ball possession following an early concession, Inter experienced difficulty connecting with each other in attack. Some divine intervention from the end of a Jonathan cross was needed, as he connected with goal scoring phenom Rodrigo Palacio in the 45th minute to level the score at one a piece.

A last minute push by Parma punished the Nerazzurri as Handanovic fumbled the ball and the away side pounced on it as they capitalized on an infrequent spill for goal. Inter went into the half trailing the visiting side, Parma, 2-1. 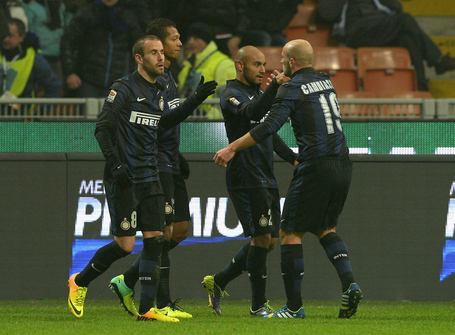 Inter kicked off the second half with possession pressing in attack to try to obtain the equalizer. In the 3rd minute of play there was a controversial non-call in Parma's penalty box as Alvarez fell to the ground. The referee waved on for play to continue and it is important to note that Inter have yet to receive a penalty through the 15th round of league play.

The Nerazzurri attack was in full swing and repeatedly peppered the goal but to no avail. Finally in the 10th minute of the second period Alvarez charged down the left side and crossed to Palacio who connected for goal. Inter were now level with the score line reflecting 2-2 for both sides.

Within a minute, the Inter attack were rewarded as Fredy scored a goal in the 11th minute of the second half to put the home side up, 3-2.

The Inter lead was short-lived as Sansone led the Parma attack to level it at three as Inter lapsed in defense on a corner kick in the 15th minute as the score was now 3-3.

For the remainder of the second half, possession alternated between Inter and Parma as they both pressed for their fourth goal and the game winner. The waning moments of the match saw some desperate defending on both sides as the final whistle sounded and the two squads left the pitch after a cracking game. Both teams were awarded a point a piece as the final score line read, Inter 3-3 Parma.

While there are few highlights for a game that lacked consistency, shape, organization, and defending at crucial points, there were some areas in which the Nerazzurri can be proud.

Considering that Palacio was playing out of his natural position of second striker and Mazzarri has yet to find the perfect formation to showcase both Alvarez and Kovacic, the Inter attack (despite injuries to strikers Milito and Icardi) continue to be the number one rated offense in Serie A.

Additional focal points that may stir hope in the Inter faithful are the possible return of Samuel and Milito to the lineups as the impending games against Napoli and Milan will be challenging. Even though Inter lost out on three important points that could have seen the lead from fourth to third place in league standings be cut to only two, Mazzarri's young team has hope as although riddled with injuries in all areas of the pitch, the Nerazzurri find it within themselves to gut out results even when things may not go their way.

As Mazzarri stated before the game in a press conference on December 7, 2013, "We're not yet fully mature enough to see games out when things are going well but we're working on it, we mustn't relax." These words from the Inter boss seemed to capture what is most lacking in the current squad, consistent performances and maintaining focus and intensity throughout the match due to immaturity. Hopefully the Inter players will bounce back to face Napoli away, as the Nerazzurri faces former manager, Benitez, while Mazzarri goes back to his old stomping grounds and faces his former team.