Inter rally late to counter early surging Milan in the Derby della Madonnina forcing the 1-1 draw. To my mind this draw counts as a win considering the early Milan advantage and the poor league results for the team as of late. Does this mean that Inter now believes that it is good enough to compete for that coveted 3rd place? Does this mean that there will be another tactical shakeup? Or does this mean that the “era” of experimentation is over?

First, some background. Inter experienced the lowest of the lows against Fiorentina just a week ago losing 4-0 away. It wasn’t just the score that was bad, the team that looked uninterested and for the first time under Stramaccioni, unwilling to fight. The days just after the game had media story after media story of the coach’s dismissal and transfer departures for the players. Knowing that the derby had to be played in a week and his job evaluation hinging on the result, Strama – some say recklessly – played the main team contributors against Cluj in a second leg of a tie that Inter already had a strong advantage. Those who criticized Strama for playing the starters appeared at first glance to be correct as Ranocchia went down at the end of the 0-3 win with a knee injury.

Personally I thought that despite the Ranocchia injury, there was no way that Strama could have allowed those players on the field for the derby with the last game taste of Fiorentina’s whipping on the tongue. Was it risky? Yeah, but every game is a risk in this sport. Even if it meant that one player had to go down with an injury, the other 10 had to gain some belief, some confidence that they deserved to be on the field with , otherwise I think that this game would have been disastrous. Not because I believe that are so much better than Inter, (Just the opposite actually. There are very few players I would say are better than Inter players at corresponding positions, although the attack is an exception, of course. But the main point here is that both teams have papered over their flaws at this point) but that the players have to believe that they are better.

Some would say that would be the coaches job, and to a point those people would be correct. The coach should instill some confidence in his ideas and selections. But in Serie A, the players aren’t stupid. They can tell that they are having a bad period just like everyone else can. They need to believe that the bad period is just that, a short bad spell that will go away at some point and that the ball will once again do their bidding. It’s my opinion that the game in Cluj went a long way to convince the players that they are still good. On the other hand, has been experiencing a great period. They have several league wins, a big winter signing and a big win against at home in the Champions League – and if I can speak frankly a moment about this, I hope that their good fortune in the Champs League continues. ’s good fortune in the Champs League is a win-win for Inter on many levels, especially if goes far without winning it all, which I don’t think they will. Anyway, Confidence for that team had to be high and from a psychological standpoint there isn’t a better way to go into a big game – with everything hitting the mark and relative harmony in the dressing room.

I don’t really want to make a single monster post about this game as I think there are a lot of things to take away from this weeks play, so I will conclude this "Part 1" today the way I started it; talking about why this feels like a win and not a draw.

Most Inter supporters are probably pretty happy because they feel that a bullet was dodged, and maybe that’s the case. But rather I like to think that this shows that the "much maligned from yours truly front office" has a clue. If there was a bullet dodged yesterday, the movement for dodging that bullet started in June 2012 when the front office replaced Cesar with Handanovic. More than any other signing this past summer, with the steal that was Cassano probably a close second, Handanovic’s acquisition has proven to be both the best football smart and financially smart move the team made. I think it’s only fair to praise the front office when they do something right and Handanovic was very right last night.

But I don’t really consider it being a bullet dodged. And I know that this might not be a surprised to many of you reading this. But here’s what I perceive to be the truth – the team invested in a goalkeeper of Handanovic’s reputation and résumé to keep them in games just like this one. You know, because this might be a season in which the last line of defense could be decisive. If and Balotelli can be praised for having a good game for making chances, then I will praise Inter and Handanovic for defending those chances – especially in the second half when Inter completely shut down ’s training ground gambit, but more on that tomorrow when I’ll talk about the tactics. Handanovic let in a goal, but probably thwarted 2 good chances from and his interventions probably kept a 3rd from even materializing. His counter-part on the other end of the field thwarted 1 good chance but let in a second. It never ceases to amaze me that a clear advantage in goalkeeping like this is constantly down played especially with media "experts". On these pages, for however long I write on this blog, defense will count just as much as the attack. And Handanovic’s game yesterday impresses me that this team is being re-built correctly – slowly, to be sure – but the way a team should be built starting in the back and gradually finding better players as you move up the field.

I think that something needs to be said about the team’s attitude yesterday. At no point, even during ’s half hour of dominance in the first half did I not see a team that was willing to settle for the loss. Sure, for that half hour it didn’t look like they were going to be able to prevent it from happening… but unlike the Fiorentina game, there wasn’t a resignation there. The ball kept getting cleared and you could see players trying to counter, trying to work some connections anything that might bring the ball out, but it just wasn’t clicking. Then would try to rework the right sided gambit on Guarin and Nagatomo again. By the time the ball was dug out of the corner, crossed or cleared again; a missed pass or poor touch would send it back to the right where the gambit was replayed. But even though there wasn’t the experience or perhaps the big picture vision to suss out the trick, they kept trying. They didn’t give up – and more importantly, they didn’t make a bad situation worse.

It would have been easy for Ranocchia to blame his knee and not sacrifice what he knew would be some swelling later for a last ditch tackle here or a contested header there.

Handanovic, whose skill I have already sung praises for, could easily been excused a second goal for the night, but he refused to give in to the temptation to give less than his all on every single stop.

As the second half started, Palacio looked dangerous, not resigned to losing, on a couple attempts to bring the ball into the penalty area and had to be harshly fouled on two attempts in order to stop him going in for the shot.

How about Nagatomo? He had been tossed this way and that in the first half. How easy could have been for him to just sit quietly in the left corner and hope that the ball stays away from him. He played himself back into the game in the second to put the ball right on Schelotto’s head for a beautiful goal before practically playing his fool leg right off.

And I could go on for every player who fought to work harder the second half. That’s a lot of heart and it comes from the top.

In the second half when Zanetti was put on the right to organize the pieces to stop the gambit, it was ’s turn to show how unable to adapt they actually were. Unable to go to their "money play", had all the same problems that Inter showed in the first half. At that point Inter, as a team, could have redeemed their pride and said, "After all that, 0-1 isn’t as bad as it could have been". But Palacio almost had a breakaway on the right if it wasn’t for the very cynical and hypocritical Montolivo – who threw the most pompous fit in the first half for a much milder clip from behind – viciously hooking the forward’s foot from behind. Or Palacio again drawing a nasty foul, this time from Abate, as the attacker beat his man and was going to make another foray into the penalty area, this time working hard from the left. Gargano let loose with a long range shot that was more hope than threat – but I applauded! "Take more shots!" I was urging the fuzzy shapes on my computer. I know that bald fascist will screw up at some point, but only if he’s tested. Guarin almost ankles in a desperate cross from Palacio that goes straight to Abbiati but the tide has well and truly turned 5 minutes before that point. Milan at this point were sending prayers from Nocerino and Muntari (who threatened at one point, but Handanovic saw it the whole 25 meters it had to travel) at the other end, not deep crosses to Balotelli waiting at the goal line or speedy incursions from SES in space. Schelotto heads a beauty of a right footed cross from the unjustly maligned Nagatomo (more on that tomorrow) into the net to nail the draw. Palacio, looking completely spent tries to head another in but it goes right to Abbiati without much conviction. Another free kick or two for at the other end completes their attempts at attack for the night. Inter tried to drop three or four lobs into the area as the game was dying hopefully but have to go away happy with the come from behind, never say die draw.

If nothing else, that second half reaffirms whatever hope I have for Strama. The players came into the game with the right attitude and with surprisingly better stamina then . After that intense half hour or so that they played in the first half, looked pretty gassed mentally and physically. I don’t understand it, but I won’t look a gift horse in the mouth. Both teams had midweek games, but didn’t even have to travel and also had an extra day to rest so I just don’t get it. Anyway, I - and I may be alone in this - still am happy with his handling of the team. I really and truly wonder what might happen if he ends the season 4th or 5th but still able to drive the attitude of his team. Which outcome weighs more, his ability to thus far save points against big teams or the final standings considering his current crop of players? 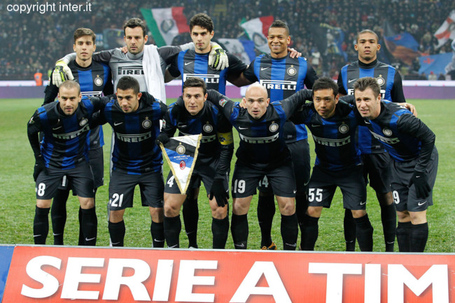