Inter pull off an amazing win in the second tie of the Europa League game only to be knocked out of the tournament on the extra-time away goal. It was a valiant effort by The Boys in Black and Blue to turn around a 3-0 first game shellacking in London. This game showed a lot of things, but especially heart and a refusal to just lie down and die without an inch of pride.

When I was a little boy I was told that pride is a deadly sin, and that it goes forth before the fall. Not only from my parents I heard this advice, but also from a pantheon of literary gods and goddesses extolling time and again how pride is a source of downfall for many a would be hero.

But for an athlete, that sin is essential. I also learned this as a little boy after being beaten by my elders and my betters at various times, but refusing to accept that status quo. I learned that if I didn’t consider myself better – perhaps against all the obvious evidence – then I wouldn’t or couldn’t actually be better than those folks.

There was a worry that this Inter team wouldn’t learn this lesson. Inter’s destruction in should have provided all the evidence that Tottenham were the better team – a sensibility I still believe, by the way. But Inter couldn’t, nor shouldn’t have believed it even at the risk of self-delusion. On paper, I don’t think there is any way that Inter could be considered better than Tottenham, except in defense, perhaps – Gallas is abysmal, frankly. But there had to be that underlining belief that Inter could lessen the embarrassment by turning in a decent performance.

Even when the game began there was the occasional foray up and down the field but there was not the barn burning frenzy that one would expect from a team eager to overturn a deficit. And I will speak for myself here, I didn’t know what to expect from this game, but I knew, I KNEW that the aggregate wouldn’t have been dented too much. There would be a run out with a lot of kids and Jonathan; there would be some kicking and maybe a goal here or there for either side. But, in the end it will be time well wasted and handshakes all around. Let’s bring on Sampdoria. That was my attitude.

But then there was the time wasting by Tottenham. Why were they wasting time? An away goal was a death knell, everyone knew this. It really looked like Inter were shocked that instead of hunting that goal, Tottenham were willing to stand pat with an admittedly formidable 3-0 aggregate thus far. The high defensive line was another question mark. Tottenham’s field, I learned from an awesome tweet by an awesome person whose name escapes at the moment and I can’t look up while at work – thanks whoever you are – is significantly smaller than The Meazza. The high defensive line Tottenham was playing, I thought, won’t be nearly as effective with all that real estate between the center circle and the penalty area, so why do it here?

At the first goal I thought that there was an acknowledgement about its face saving nature. Well done to not roll over and give yourselves some pride. Bravo, bravo.

At the crossbar getting tuned I thought, "Wow that could have made things interesting for the second half, but oh well no one in their right minds should be expecting anything."

At this point I was traveling home from work and when I arrived at home I checked the score just to check in. It was 2-0 but well into the second. Okay. Well, I wondered if it was a fluke or if Inter is actually going for it. So I booted up the computer to see if there was anything to see. I had just gotten everything to situated and watched for a few minutes when Cassano took a free kick that bounced off a most poorly angled foot at a free kick I have ever seen a defender have – I mean the defender was facing the open goal mouth with his foot pointing right at it, for pity’s sake.

It was now 3-0 and I was completely invested in what should have been a totally worthless game. Cambiasso broke my heart about 15 minutes later missing the exact same shot that Alvarez missed in and we went to extra time.

We all know what happened then. A very English goal was scored against us, more hustle than technique and perhaps too reminiscent of the infamous Butt Fumble, but all credit to them for following the shot and taking advantage of the deflection. Alvarez ensured that the remaining minutes of the tie were uncomfortable for the English visitors.

This game both proves me right and wrong in my recent musings. I was wondering at one point whether Andrea wanted to play a regista because he continuously started players who were there to break up play, but Strama has been reasonably stubborn in putting Kov as the director lately – even if it was somewhat contrary to the public advice. So I wiffed on that one. Kov is very much that director. And let me also say this. I talk a lot about the three phases of the game (recovery, advancing the ball, and shooting) and how we don’t have enough guys who can excel in more than one phase. Kov showed that he is very decent at recovery as well as passing the ball forward. He might not play against Sampdoria, but I really think we will get a healthy dose of him until the end of the season.

By the way, I hereby dub him "Sleepy". Look at every picture of him playing – his eyes look closed in every one.

But I will take a little credit on Strama moving the team closer to a 442. I haven’t seen anyone else but me talk about it – if I am way off base on this, feel free to correct me. I see more of it coming as we move on here. Cassano and Palacio need to play together now that the commitments have pared down a little. I don’t rule out a return of the 4321 though. I love the combination of players we can put together in the other AM spot – Cassano gets the one on the left. As long we get Cassano and Palacio together with Sleepy behind them I think we look a lot more likely to score than we might have before. 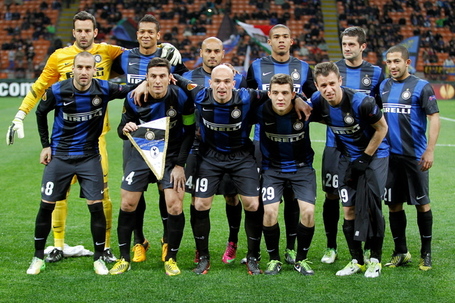