Catania v Inter: I Have No Earthly Clue What to Expect

Let's just say that I am not expecting much. Like last year, our brief fling with positive results got everyone all starry-eyed and moony until we were reminded of the cold reality of a mid-thirties coach on his first Serie A team and a May-December squad built on the cheap. Everyone says that third place and the champions league is our goal but even fourth is starting to look out of reach. So here we are, a squad (and fan base) beginning to accept the reality of its age and inexperience (who would have thought we would get saddled with both?) going down to Sicily to meet a club who has been playing very well at home and are only two points behind us in the standings. They would be absolutely thrilled to have the EL spot Inter currently inhabit. And, if we dont get our act together, they likely will. But hey, that doesn't mean we cant go out there and have some fun tomorrow.

Share All sharing options for: Catania v Inter: I Have No Earthly Clue What to Expect

What: Catania v Inter.
Where: The only unlovely place I have ever been to in Italy (I am not saying that they dont exist, but of the places I have been, this was the ickiest)
When: Sunday, EARLY! 3pm local time (6am pacific, 9am eastern)
How to Watch: Live on RAI International and beIN Espanol. Repeat four hours later on beIN Sport. Try here for a stream.

I guess that when Strama said today that the Stadio Angelo Massimino is a "traditionally rough ground for us" he was talking about last year's result. The game finished 2-1 after an early goal from Cambiasso and what I think was a dubious penalty awarded to Catania. Oh well. Ranieri had half his squad either injured or suspended so... oh wait, so does Strama. Never mind.

Catania have been doing really well this season. Their original goal this season was to stay in Serie A. Now the club says they are aiming for a spot in Europe. They haven't lost a home match since November (1-3 to Milan) and they have beaten Fiorentina (2-1), Roma (1-0), and Lazio (4-0), all teams that have beaten Inter. Catania have like a thousand Argies on their team (ok, maybe only 10), including their top goals scorer, Gonzalo Bergessio. Other players to keep your eye on are Spanish midfielder Keko (isn't that a gorilla who knows sign language?) and Argie defender Nicolas Spolli. Both have had great seasons so far. Nicola Legrottaglie has also done surprisingly well (hands up, who thought he was totally washed up?), but he is suspended for this match. They have built a pretty good squad and this will be tough for Inter. Oh, and the stadium is completely sold out. Ugh.

Yep. Three forwards... and one of them is Tommaso Rocchi. I guess for those optimists among you, you can look at this as Rocchi's chance to prove that he is not just a big, bald waste of space. For we more pragmatic types, there is always liquor... or Xanax... it is pretty early in the morning after all. Everyone not on that list is either injured (Samuel, Obi, Castellazzi, Silvestre, Nagatomo, Mudingayi, Milito), suspended (Ranocchia), or has recently gotten in a shoving match with the coach (Cassano). Really, this is Cassano. We would be disappointed if he didn't do something like this. Strama may need to grow up a bit, though.

There is some thought that Palacio will start from the bench in favor Rocchi. Rocchi is not on the EL list so cannot play midweek against Tottenham (thank goodness) so it makes a bit of sense to use him here. What has the world come to when people are actually thinking "whew, good thing we have Rocchi." It boggles the mind. Other non-Europa League eligible players like Kuzmanovic and Schelotto may also get the start on Sunday. FCInter News is predicting a 4-2-3-1, Who Scored a 4-3-1-2, and La Gazzetta a 4-3-3. I guess I am not the only one who has trouble keeping up with Strama. They all agree on a back four of Zanetti, Chivu, Juan Jesus, and Pereira, but disagree on whether it will be Kuz or Kovacic in the midfield, and if Palacio will play. Really, who can say. The stress is clearly getting to Strama (he looks haggard), if things were going better, I dare say that a Mourinho joke in the locker room would not have escalated to something involving shouting and shoving. Seriously, that is like one step from Ancelotti's chocolate and cigarettes on the sidelines.

I think that what everyone needs to do is just take a breath and relax a bit - that includes the fans and the squad. I know that things have been tough recently - hell, our beloved President just hinted that he is shopping the club around - but allowing the results to get to you just creates self-fulfilling cycles. I think of it as the breaks are out so there's "no point in steering now" mentality (yes, it is from Strange Brew, I love that movie). Basically, since it looks like everything has already gone to shit why even try. Defeatism is so much easier. That is why I say that we fans need realign our expectations. We are not going to win the scudetto this year (gasp!). Just move on from that. We may not even make the Champions League next season (double gasp!). That doesn't mean we still cant win a few games, maybe pick up a Coppa Italia or an EL semi final along the way. If we are extremely lucky, maybe another Juve pelt to add to the one we have already. If the squad (and the fans) can just relax and remember that they love the game, then maybe the wins will come. Shoving each other wont get us anywhere.

I leave you with:

To Strama and Cassano (and the fuckface who leaked the story to the press), may I be the first to present you with the Tapiro d'Oro. You two have earned it. 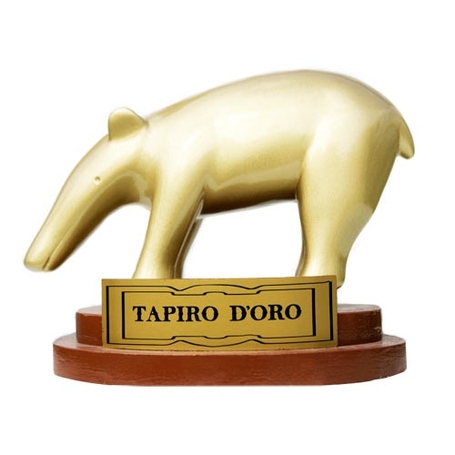