Inter played a competitive game but ultimately lost at home 1-2 against the holders and leaders of Serie A. Looking at the lineups it was clear that Inter played against a superior - talent on paper, clearly not moral - team. Unlike games against Milan or Fiorentina where Inter were completely checked out in the first half and had to fight for pride in the second, the scale was much more even all game long.

I'll just start with the controversy. "The outcome might have been very different had referee Nicola Rizzoli had awarded either of two strong penalty calls for Inter around the 70-minute mark" so says ESPN. LGS echoes the sentiment. Yes there were possibly 2 penalties for Inter not given in this game. The first would have been iffy, only because there were 2 Juventus players who came in and tried leg scissor takedowns on Kovacic and only one actually managed to do it, so who to call the penalty on is problematic to be sure. But, I can see the defense being given the benefit of the doubt on that one – assuming all things are equal. Fair, normal people can give some understanding that in defending the margin of error is small. A centimeter here its okay but a centimeter there it’s a game changing disaster. This is worth some leniency from both referee and fans and I am right there with that. But when it happens twice, and the next time more flagrantly right in front of the so called goal line "official" and nothing was given… well. Now we are suspicious - I’ll even gloss over the fact that Cassano had beaten Chiellini and was going on goal with no one in front of him.

This is the reason that I don’t get worked up too much for these games. Anyone who doesn’t expect this crap hasn’t been paying attention for a long, long time. Rizzoli shows how he’s better at his job than Tags, though… he waits until the second half to make his move so that there isn’t any halftime chatter forcing him even things up. And of course there is no caution on Cassano for simulation – because we all know there wasn’t any and why should the ref call attention to himself twice for the same bs call?

The attack looked very good and made a lot of chances in both halves. Buffon had to work to keep the game at 0-1 for the first 45. By the end of the half all that was missing from Palacio was a goal. The point blank shot that Buffon saved was miraculous and a credit to his career as a top player at his job. He was in the right place as the ball was hit and all he had to do was reflexively touch it. Cassano made him stretch and he was able to do so despite his years is also a credit to his professionalism. Like Zanetti it’s obvious that he keeps himself in top shape

Kovacic, I thought played very well. When he got the ball in space and was able to turn upfield there was no stopping him. Teams have been playing Inter at breakneck speed in the first half because they know that we don’t have the firepower to come back in the second. A guy like Kovacic who can play fast, can press and can make a beautiful pass right in the middle of the field is a gem. Sleepy is showing me something. Strama tried to rein him in the first half making him stay around the back 3. But in the second half he was turned loose. I really liked his game and it was he that started the move that got the ball to Cassano who laid it up to a streaking Palacio – on purpose? Was Cassano aiming for someone else when Palacio streaked in? I am not sure… - that equalized.

Cassano’s attitude was good to see. He was fighting the whole game, even when it looked like he was completely out of gas. I don’t know if Cassano is here next year – and I really don’t care. But today he was willing to fight and that’s all I really care about. He lost the ball some and he messed up some passes. Most times when he touched the ball he was hammered pretty good which only goes to show the respect he garners. The best thing I liked about his game was when he yelled at someone for passing the ball too high to the front rank. It’s obvious to many of us that our forwards are short, outmanned and not great with the headers besides. He’s not a great leader but this team needs some yellers. Not too many, but one or two oughta do it.

I also thought that Strama going back to the 3 man defense for this game was a good call. It’s a curve ball that I don’t think anyone expected and it gave Juvetnus problems last time. It gave them problems this time too. More than anything else though, it was a ballsy call and I appreciate that. All the speculation (re: "lies") that has been written or said or transmitted trying to destabilize the team by inserting the flavor of the month as the new Inter coach this summer and he shows just how much everyone doesn’t know by springing the 352 on everyone who was predicting all sorts of stuff that was completely wrong. He set the team to play without fear of Juventus and to go after them. And like it or not, that’s what the team did. Inter had the ball for long stretches, the team scored from the run of play and made lots of chances against what was supposed to be a much superior team.

I think that the reaction of Cambiasso to crunching Giovinco’s leg was the wrong one. Why was he apologetic? I understand that Cambiasso didn’t mean to hurt anyone, anyone who has watched Cambiasso these nearly ten years knows that he’s tough but always offers his hand afterwards. But bad fouls happen, especially to undersized players. No one fell over themselves to apologize to Figo when Nedved crippled him from behind. Juventus teammates and supporters jeered when some nameless Juventus (Tiago something?) player got thrown out going in hard on purpose on Mario’s legs a couple of years ago. All of sudden there’s some code of conduct that needs to be observed here (or does the outrage only go in one direction)? Besides, I thought I saw Giovinco walk off the field, which is more than Figo got. And Conte’s reaction? I don’t know how many people remember his playing days, but he should be the last person to get upset about one player hurting another.

Speaking of Cambiasso, it might be a blessing that we don’t see him for a few games. I think his game has fallen off for several years now and I think that I am now of the opinion that more often than not – especially as the season wears - he’s not very good for us.

Speaking of midfielders, I will be happier when I get to see the backside of Alvarez and Gargano walking away from this team. Both have the same problem – they are one dimensional in a 3 dimensional sport and a game like this only highlights these deficiencies. Compare them to the kid, Kovacic who can run, who can dribble, who can pass and who can tackle some. Gargano can only run defensively. He can’t make a run into the box. He can’t make a pass over 10 feet long and he certainly can’t shoot. And that’s not necessarily bad, if he’s really, really good at what he does. But, the trouble you run into is that you do have to compensate for his lack of offense with someone else. If you have Eto’o as your striker, you’re fine. But if you have less than that… then you have problems. You can’t hide Gargano in Italy. A weakness like that is sniffed out in a hurry.

Alvarez is the same problem from the other end. He can pass, but he doesn’t make decisions fast enough, he doesn’t run, he can’t mark – like say Pirlo who was his assignment today – and he’s not physical enough for his size. When he gets time and when there is someone else to do his running, he’s fine. In a game like this, he needs to do more, or leave. If he’s playing behind the forwards then he needs to come back at times, he needs to pressure something, anything at the top of the circle. Or he needs to score more goals. Either way, he needs to do more and if he’s not capable of that then it’s time to sell him on. He’s far too invisible for a guy with his technical ability.

Outside of the refereeing the ugly can only go to Handanovic on the second goal. He cannot let the ball get that close to the net without challenge. He did the right thing when he came off his line against Vidal and got a touch on the ball twice to disrupt that chance. He didn’t do the right thing when he stayed put letting Matri get a touch on the ball that close to the net. Like against Tottenham, it was a hustle goal. Like against Tottenham, Handanovic lets the player and the ball get too close. Matri doesn’t give up on the ball, but Handanovic has to read the play. It wasn’t a screamer of a cross. The ball comes into his smaller area. He has to know that the defender isn’t going to run into his area to hinder his sight or mobility. At some point, he has got to own that area. When there is a big game for Inter he will need to command his area. There is no fault on the first goal for anyone but perhaps Walter Samuel or Chivu who didn’t close down Quags soon enough to prevent a nice goal.

Guarin gets a special mention here for being a douche and taking an extra day off. There’s less than 2 months and a race to the finish to go. Then you’ll get to play with whichever young lady suits your fancy after work, like the rest of us do.

The conclusion is that Inter does better than expected – we got more the team that excelled at home against Tottenham than the team that struggled at home with Bologna - against a Juve that shouldn't have needed the refereeing help to do 3 points of damage and I'll call that pride saving if not an actual win. It’s yet another strong performance for Strama these last 2 games. It can’t be a coincidence that with a single strong midfielder that the team has been missing since "Glass Man" Motta Inter looks a lot more competent, can it? 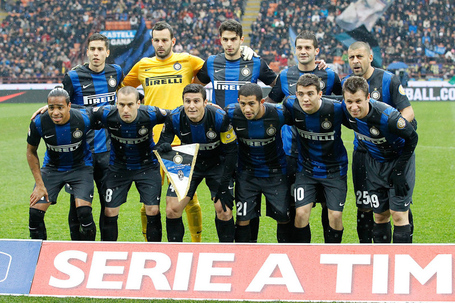