Inter deservedly lose away to the much more polished and refined London club in the first leg of their two game tie. The contrast of the two clubs was stark, as one looked about as in form as can be and the other incomplete.

I haven’t done a whole lot of reading of the fan-base on this one and I probably won’t. Lately it’s been whining, "I told you so!" when Inter lose and silence from certain corners when Inter win. And this is from other Inter fans. I don’t understand it. No doubt there will be calls for the coach to be thrown out because of the heavily loss. There is nothing like some good old fashioned Italian overemotional reactionary-ism and overreaction. I don’t know why but Inter seem very susceptible to it. Maybe people are just conditioned to the President doing it. I don’t know if Moratti will fire Strama – or even should at this point - at the end of the season, but I still don’t like it in my gut. He’s done better with less than the last bunch we had. He’s also been willing to work with the upper levels to a degree that many his senior in age and experience can’t seem to do. His players are playing for him, still. And Cassano notwithstanding – I am sure that the media don’t have this one right – his players still seem with him.

Ironically, or maybe more correctly, oddly coincidently, this is coming as Inter are concluding a game against Villas-Boas. AVB, as some might remember, was declared incapable of coaching at the highest levels, and was too young, blah blah blah. Sound familiar? I don’t know, he seems to be doing a good job to me. This is a better club than I witnessed last time. It reminds me of a more European team, as opposed to an English team.

Anyway, this scoreline doesn’t surprise this reporter as before the game I predicted a 3-1 finish with Handanovic saving another 1 or 2 for us. I will say it again for those who didn’t believe me the first dozen or so times I wrote this; this isn’t a great or deep team. You should temper your expectations. There is no magical formation or mystical combination of players that will change any of this. Tottenham are a better team and they played better. I just don’t understand how people can be upset about this loss. Losing to a team like , all due respect deserves upset feelings. Losing to a better team just means that things worked out the way things are supposed to work out. When our cycle comes around again, and we are the better team, then it’ll be nice to know that we will win fairly in at least this competition. We all know that wasn’t always the case…

Besides if we start feeling bad for a loss like this then what should the supporters have done? They have a much better team than we do and they were blown out over two legs in the last stage! We probably got as far as we should have – I think that this stage is probably just about a good measure for the talent level of this team at this moment. Better than a large percentage of European teams, but not good enough for the top level.

Anyhoo, I am far too sick and run down to really get into any nuts and bolts here so I’ll do some Good, Bad and Ugly.

Let’s start positively, shall we? And believe it or not, there are some things that I think are good.

First of all, it was nice seeing Cassano playing for the team. He seemed more a cog in the workings than a Pazzo ex Machina. There were a several instances where he helped the team by very nearly putting a teeny amount of pressure on the defenders. Part of the deal that Strama wants from the guys up top is to press the other team around the center circle. The team doesn’t have anyone/that kind of forward yet, and you kind of understand that Cassano won’t do a whole lot of that for you, but at least there was effort there. He might only be doing it so that he can go this summer or things might really be cool between everybody, I don’t really care. When he came, was nice enough to give us 2 years salary with the player – so whatever he gives us, it’s been paid for. So despite all the headlines, the professionalism in this game was a nice bonus.

Despite the goals, I thought that Ranocchia had a decent game. I don’t think I could fault him for any of the goals. He was hung out to dry on several occasions by a very porous midfield and cleaned up his fair share of players just running at him at speed.

Handanovic played a very decent game too. Against he was otherworldly. Today he was just good. I don’t put any blame on him for any of the goals. But I noticed something odd, and maybe it’s just me, but did any of you also notice if that field was really short? Handanovic does not have a powerful goal kick by any stretch, but he was getting distance here that he just doesn’t get at the Meazza. Plus, the English team was playing very high – one of the ways to beat that tactic is to go over the top but there just didn’t seem to be any room to do that. Does anyone have any hard data on this? It just seemed weird to me.

People can complain to me that Pareira isn’t good or that Ricky isn’t any good, or that Naga isn’t any good or that Jonathan isn’t any good. People can complain about those guys all they want, but before I say any more about them I want to know how the spine of this team gets fixed. Right up the middle, this team isn’t strong. And when I say strong I mean that the other team can sit high on the center circle and have lunch for all the pressure on them there. Players on the other team can sit on the arc at the top of the penalty area and get a good long look before making a well timed pass or shot that causes problems that we fans can misdiagnose as bad defense. It is bad defense – but not by the 4 dudes who sit in front of the goalkeeper. It’s bad defense by the guys that are put in front of those guys.

Today, Strama put two "destroyers" - and I use that term loosely – in front of the defense to keep Tottenham from just running up the middle of Inter’s defensive area. Let’s be clear, the middle of the penalty area is the most dangerous part of the field for us, because it gives an attacker the best angle and the most net to target. Strama wanted to clog that area and make Tottenham have to take shots from an oblique angle. So, where do the goals come from? Right up the middle, you say? Two headers right in front of the goal mouth and a rebound from a shot center left at the top of the area, you say? All night long the club had little to worry about running up the middle to our doorstep or defending the middle.

And to a larger extent that has been our problem all season. That middle of the field is where all the bad stuff in our lives comes from. And it happens because outside of Guarin, we don’t have one guy who can be useful in more than one part of the game. Gargano is good at recovery, but for the other team it’s almost better to let him have the ball and then collect it when he tries to pass it. Cambiasso once upon a time was a jack of all trades, but is down to spot duty, really. Kovacic is too young to influence the game as much as he wants to. Palacio needs to be on the move to be really effective and Cassano likes to play from wide to the inside. There’s no presence in the middle to keep the other team honest for the outside guys to get slack. Now talk to me about Inter players not being able to do work outside. Of course he isn’t able to work outside, the whole other team is there… because why not? Why should the other team collapse their defense to protect their goal and create space to the outside? There’s no Inter player there to watch or be aware of! And when the ball is turned over, there isn’t anyone there to keep the other team from ramming the ball right down our gullet. Once we had a Motta or a younger Stankovic who was there to slow the ball down with a smart foul or recover the ball and launch a counter of our own forcing the other team to be aware of danger from that area. We don’t have the players.

Keeping in that theme I nominate Cambiasso and Gargano for PUGs (Players Ugly of the Game – and frankly, I am not exactly fond of the breed either). Cambiasso was beaten badly on two crosses – one of which was a corner for crying out loud. The man has played in World Cup games that mattered, Champions League Finals and League cup games galore, but he looked lost out there trying to defend headers. He’s too short, you say? He’s no match for Bale/Vertonghen in the air, you say? Then, I say, that he musters some of that experience that we are obviously keeping him around here for and deny those guys the space from which to attack the ball from. Get in position and wall them off, pinch their ears, or tell them a story. I don’t care. Keep them out of that spot proactively if you are giving up too much in height and weight. At least get goal side of them for pity’s sake. That’s just basic.

Inter deservedly lose this game because Tottenham successfully exploited Inter's weaknesses better than Inter can hide them. It also didn't hurt that Tottenham has better players, are more physical, have less pressure on them and a deeper bench. In this case they had all the advantages and used them splendidly. For the last two weeks I have been reading about all the purchases that Inter are trying to secure for this summer. I am not going to get excited about any of them until we get a midfielder who can play in the middle of the field and do more than one thing. I want a midfielder who can pass and recover the ball or shoot. I don't care which as long as he can do two out of those three. 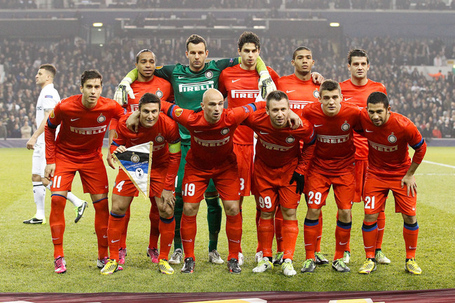